Figshare - credit for all your research 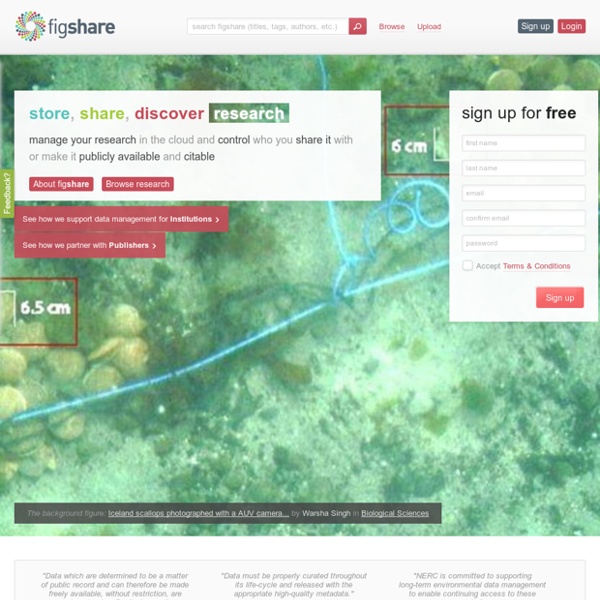 CSV Fingerprints CSV is a simple and common format for tabular data that uses commas to separate rows and columns. Nearly every spreadsheet and database program lets users import from and export to CSV. But until recently, these programs varied in how they treated special cases, like when the data itself has a comma in it. It's easy to make a mistake when you try to make a CSV file fit a particular format. To make it easier to spot mistakes, I've made a "CSV Fingerprint" viewer (named after the "Fashion Fingerprints" from The New York Times's "Front Row to Fashion Week" interactive ). The idea is to provide a birdseye view of the file without too much distracting detail.

Open Science - Research & Innovation Open science represents an approach to research that is collaborative, transparent and accessible. Open science occurs across the research process and there are many different activities that can be considered part of this evolution in science. The open science monitor tracks trends in areas that have consistent and reliable data. Best Educational Search Engines For Academic Researchers Conducting academic research is a critical process. You cannot rely solely on the information you get on the web because some of the search results are non-relevant or not related to your topic. To ensure that you only gather genuine facts and credible data for your academic papers, check out only the most trusted and incredibly useful resources for your research. Here's a list of gratuitous and best academic search engines that can help you in your research journey.

Do Something Different - Iceweasel Do something different... get something different. Be more effective. More in control. Happier and less stressed. When we want to make changes, why do we find it so hard? Just Delete Me Can't find what you're looking for? Help make justdelete.me better. easy AWL Headwords - School of Linguistics and Applied Language Studies This list contains the head words of the families in the Academic Word List. The numbers indicate the sublist of the Academic Word List. For example, abandon and its family members are in Sublist 8 of the Academic Word List. Sublist 1 contains the most common words in the AWL. Sublist 2 contains the next most common words, and so on. There are 60 families in each sublist, except for sublist 10 which has 30.

Portal:Agriculture and Agronomy - Wikipedia, the free encyclopedia - Iceweasel Agriculture in Ethiopia is the foundation of the country's economy, accounting for half of gross domestic product (GDP), 83.9% of exports, and 80% of total employment. Ethiopia's agriculture is plagued by periodic drought, soil degradation caused by overgrazing, deforestation, high population density, high levels of taxation and poor infrastructure (making it difficult and expensive to get goods to market). Yet agriculture is the country's most promising resource.

Tabula Upload a PDF, get back tabular CSV data. Poof! As many developers and data reporters know, dealing with data tables in Adobe Acrobat PDF files is a pain in the rear (to put it lightly). expanding vocabulary: the AWL The ‘academic word list‘ is something worth knowing about, as a rough guide to vocabulary that’s used a lot in academic contexts, but not so much ‘off campus’. You can download the basic list by clicking on the image below, where I’ve put them into a handout format. Print it, keep a copy handy in your pocket, read through the lists and make sure you know most of these words.. Start with the left side column (most frequent), then the second column (next most frequent) etc, and just highlight any you’re not sure about, and look them up or ask

Posts - Research Blogging A recently published report from the Cochrane Colloboration suggested that two drugs which are used in the treatment of human Influenza are not as effective as reported in clinical studies, so it is worth to pause a moment and recapitulate how these drugs work and take a closer look at the report before rushing to any judgment. ... Read more » Moscona, A. (2005) Neuraminidase Inhibitors for Influenza. New England Journal of Medicine, 353(13), 1363-1373.

I was told to lie: Manus Island staffer Liz Thompson, a former migration agent turned whistleblower, has described the administration of the Manus Island detention centre as 'ridiculous' and claims she was instructed to tell detainees their only option was resettlement in Papua New Guinea. “They (detainees) watch the news, they read the newspapers, they watch what’s going around in the camp, they know there’s no decision from the Papua New Guinean Government on resettlement," she told Dateline's Mark Davis. "So what that means is… you’re never getting out of this camp, it’s indefinite detention." A spokeswoman for the Minister for Immigration and Border Protection, Scott Morrison, denied that Manus Island detainees had been told they would not be resettled in PNG. “With regard to reports that the transferees were advised that they will not be settled in PNG, the Minister has been advised that those reports are false," she said in a statement. Ms Thompson said she knew their only option was indefinite detention, and so did they.