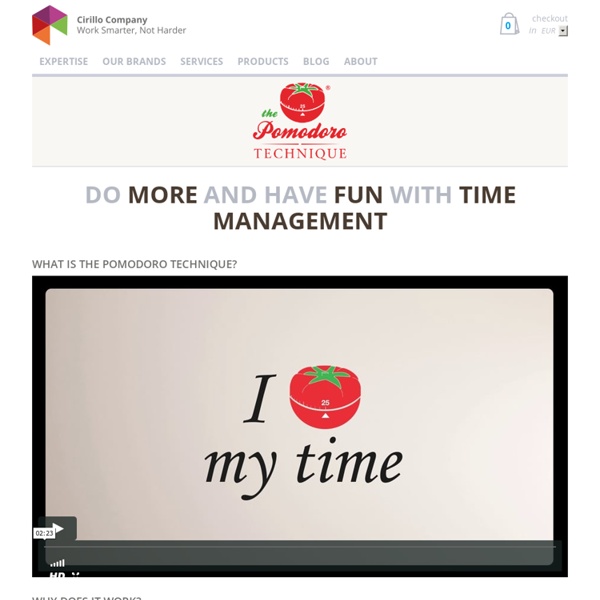 What is The Pomodoro Technique? EASY for anyone to use! Improves productivity IMMEDIATELY! FUN to do! Why Pomodoro? The Pomodoro Technique isn’t like any other time-management method on the market today. For many people, time is an enemy. Essential to the Pomodoro Technique is the notion that taking short, scheduled breaks while working eliminates the “running on fumes” feeling you get when you’ve pushed yourself too hard. Whether it’s a call, a Facebook message, or suddenly realizing you need to change the oil in your car, many distracting thoughts and events come up when you’re at work. Most of us are intimately acquainted with the guilt that comes from procrastinating. Who does the technique work for? These are all ways real folks use the Pomodoro Technique: Motivate yourself to write.Limit distractions.Keep track of how long you’re spending brainstorming / writing / revising.Reduce back and neck pain by walking around during Pomodoro breaks.Draft a book in three weeks. How It works

Mice can 'warn' sons, grandsons of dangers via sperm › News in Science (ABC Science) News in Science Monday, 2 December 2013 ABC Epigenetic changes Lab mice trained to fear a particular smell can transfer the impulse to their unborn sons and grandsons through a mechanism in their sperm, a study reveals. The research claims to provide evidence for the concept of animals "inheriting" a memory of their ancestors' traumas, and responding as if they had lived the events themselves. It is the latest find in the study of epigenetics, in which environmental factors are said to cause genes to start behaving differently without any change to their underlying DNA encoding. "Knowing how ancestral experiences influence descendant generations will allow us to understand more about the development of neuropsychiatric disorders that have a transgenerational basis," says study co-author Brian Dias of the Emory University School of Medicine in Atlanta, Georgia.

Navi: The Guiding Spirit The following article is a theoretical piece, so please read it with that in mind. It reflects the opinions and ideas of the author, and not Zelda Informer as a whole. This article is also part of classics month, and as such it may conflict with the recent release of Skyward Sword and Hyrule Historia.

Why Are We so Distracted All the Time? If your work depends on finding undisturbed time for deep focus and creative thinking, you know all about the modern curse of distraction. (If you’re never distracted, you’re probably a robot. Oh, and I hate you.) What you may not realize is that most of us misunderstand what distraction really is – and clearing up that confusion is an essential first step to any lasting solution. Instinctively, we divide sources of distraction into two categories. How To Stop Being Lazy And Get More Done - 5 Expert Tips Before we commence with the festivities, I wanted to thank everyone for helping my first book become a Wall Street Journal bestseller. To check it out, click here. Some days the to-do list seems bottomless. Just looking at it is exhausting. We all want to know how to stop being lazy and get more done.

The 4 types of productivity Within weeks of starting my first job out of college, I was sent to the in-house time management training program. I dutifully attended the class and used the planner they provided as instructed. But as the weeks went by, I noticed that my productivity hadn’t improved. As I looked around at my colleagues, I noticed that many of them were also struggling with the system. The reason is simple: There is no one-size-fits-all approach to productivity. Instead, we need personalized approaches. Wearable Neurocam The "neurocam" is a wearable device that can detect emotions via brainwaves, and automatically records "scenes" based on the wearer's interest level. From KurzweilAI: The algorithm is based on measures of “interest” and “like” developed by Professor Mitsukura and the neurowear team.The users interests are quantified on a range of 0 to 100. The camera automatically records five-second clips of scenes when the interest value exceeds 60, with timestamp and location, and can be replayed later and shared socially on Facebook.

Trying To Remember Multiple Things May Be The Best Way To Forget Them Leigh Wells/Ikon Images/Getty Images Our days are full of things to remember, and they don't always arrive in an orderly fashion. Perhaps you begin your commute home and remember that you need to pick up milk. But then immediately, another to-do springs to mind: You never called back your friend last week. You may try to hold both in your head, but in the end the milk, the phone call or both still sometimes fall away, forgotten. A new scientific model of forgetting is taking shape, which suggests keeping multiple memories or tasks in mind simultaneously can actually erode them.

Time Management Tips: How to Find the Right Mindset to Succeed With Time Management For the past several years I have worked with time management techniques such as lists, prioritization, planning and so on. But it wasn’t until I adopted a Quadrant 2 mindset that I really started seeing results. Injectable, Cellular-Scale Optoelectronics with Applications for Wireless Optogenetics Successful integration of advanced semiconductor devices with biological systems will accelerate basic scientific discoveries and their translation into clinical technologies. In neuroscience generally, and in optogenetics in particular, the ability to insert light sources, detectors, sensors, and other components into precise locations of the deep brain yields versatile and important capabilities. Here, we introduce an injectable class of cellular-scale optoelectronics that offers such features, with examples of unmatched operational modes in optogenetics, including completely wireless and programmed complex behavioral control over freely moving animals. The ability of these ultrathin, mechanically compliant, biocompatible devices to afford minimally invasive operation in the soft tissues of the mammalian brain foreshadow applications in other organ systems, with potential for broad utility in biomedical science and engineering.

Introduction - Final Fantasy d20 Welcome to Final Fantasy d20! In this handbook, you will find all the information needed to run a Final Fantasy d20 game, or to add Final Fantasy flavor to your normal Pathfinder campaign. The series is designed for electronic distribution, made to for modular access to the game system in PDF format that is easy to print out and use as you need them for your games. For Adults, Coloring Invites Creativity And Brings Comfort : 13.7: Cosmos And Culture In 1982, anthropologist Adrienne Zihlman, now professor emerita at the University of California, Santa Cruz, published The Human Evolution Coloring Book. Students of biological anthropology were invited to learn about DNA, genes, monkeys and apes — and the fossils, tools and evolutionary relationships of our human ancestors — by coloring in pages rife with factual information presented visually, as well as in words. A Ph.D. candidate back then, I had never encountered such an object before, with its mix of a children's activity, as I then thought coloring to be, and an adult student's science material. I learned from Zihlman's presentation. Side-by-side skeletal comparisons of the australopithecine "Lucy" and a modern chimpanzee in one case, and robust (large-boned, thick-jawed) and gracile (more slender) australopithecines in another, helped me visualize facts and concepts. I didn't color in the pictures, though.

An Ingenious Cookbook Uses Infographics Instead Of Words How do you make lasagna? Even though it’s not that complex of a dish, to spell out the methodology--the specific ingredients and the many small, easy steps of prep work--it would take me half a page of type or more. But for designer/illustrator Katie Shelly, writer of Picture Cook: See.