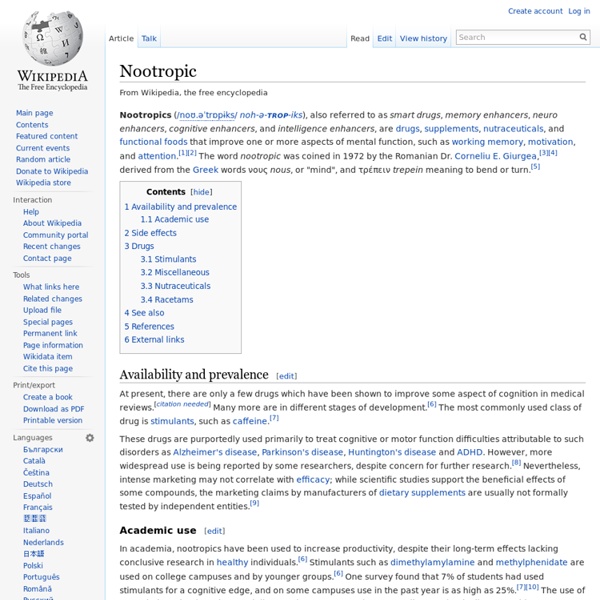 Nootropics (/noʊ.əˈtrɒpɨks/ noh-ə-TROP-iks), also referred to as smart drugs, memory enhancers, neuro enhancers, cognitive enhancers, and intelligence enhancers, are drugs, supplements, nutraceuticals, and functional foods that improve one or more aspects of mental function, such as working memory, motivation, and attention.[1][2] The word nootropic was coined in 1972 by the Romanian Dr. Corneliu E. Giurgea,[3][4] derived from the Greek words νους nous, or "mind", and τρέπειν trepein meaning to bend or turn.[5] Availability and prevalence[edit] At present, there are only a few drugs which have been shown to improve some aspect of cognition in medical reviews.[citation needed] Many more are in different stages of development.[6] The most commonly used class of drug is stimulants, such as caffeine.[7] Academic use[edit] Surveys suggest that 3–11% of American students and 0.7–4.5% of German students have used cognitive enhancers in their lifetime.[11][12][13] Side effects[edit] Drugs[edit]

Related:  Brain Augmentation • On the Pharm

Cyberware Cyberware is a relatively new and unknown field (a proto-science, or more adequately a “proto-technology”). In science fiction circles, however, it is commonly known to mean the hardware or machine parts implanted in the human body and acting as an interface between the central nervous system and the computers or machinery connected to it. More formally: Crazy Meds: The Good, The Bad, & The Funny of: Finding the Treatment Options That Suck Less Welcome to Crazymeds, where you can learn what’s good, what’s bad, what’s interesting, and what’s plain weird and funny about the medications used to treat depression, bipolar disorder, schizophrenia, epilepsy, migraines, anxiety, neuropathic pain, or whatever psychiatric and/or neurological condition you might have. The information on this site is to help you work with your doctor(s) to find the right treatment options. Too many of us get nothing more than 15-minute appointments with overworked doctors or nurse-practitioners, so we need all the help we can get. We need to talk to our prescribers about the best medication1 to treat our conditions, and not the most profitable ones, or the cheapest ones2. OK, in reality “best” usually translates to “least bad.” If you know the name of the medication(s) you’re looking for, you’ll probably want our list of drugs by name.

Noogenesis Noogenesis (Ancient Greek: νοῦς=mind + γένεσις=becoming) is the emergence of intelligent forms of life. The term was first used by Pierre Teilhard de Chardin in regard to the evolution of humans. It also used in astrobiology in regard to the emergence of forms of life capable of technology and so interstellar communication and travel. Teilhard[edit] Noogenesis began with reflective thought; or with the first human beings. Teilhard believes that because human beings are self-reflective (i.e. self-conscious) they constitute a new sphere of existence on earth: the sphere of thought, or the noosphere. Sonic Nausea Device makes you want to throw up by Mark R I realize that the title of this particular article is obvious, to say the least. After all, this tiny device is called the Sonic Nausea because it uses “a unique combination of ultra-high frequency soundwaves” to produce nauseous effects for those in its range. The Sonic Nausea is also capable of causing “headaches, intense irritation, sweating, imbalance”, as well as making people puke. It is powered by a 9-volt battery that is actually bigger than the device itself. That won’t get you too much power, but it is possible to increase the runtime with six AA batteries with transistor clips.

Essential First Aid Item: Activated Carbon Activated carbon, in powdered form, should be in every medicine cabinet and first aid kit. It is also known as activated charcoal. It is used around the world as a universal antidote for hundreds of poisons, including arsenic, mercury, pesticides, strychnine, warfarin, hemlock, E. Coli endotoxin, and gasoline. Over 4,000 chemicals, drugs, plant and microbial toxins, allergens, venoms, and wastes are effectively neutralized by activated charcoal, when it is given in sufficient quantities.

Noology Noology or Noölogy derives from the Greek words νοῦς, nous or "mind" and λόγος, logos. Noology thus outlines a systematic study and organization of everything dealing with knowing and knowledge. It is also used to describe the science of intellectual phenomena. It is the study of images of thought, their emergence, their genealogy, and their creation.[1] In the Critique of Pure Reason, Immanuel Kant uses "noology" synonymously with rationalism, distinguishing it from empiricism: Spanish philosopher Xavier Zubiri developed his own notion of noology.[3]

Trip Glasses let you meditate and hallucinate in style by Ally Most people meditate to get away from the fast paced world and even technology. Well for those of you that can’t stand to be without your technology and would like to have a little more fun while you’re meditating, Think Geek has you covered.