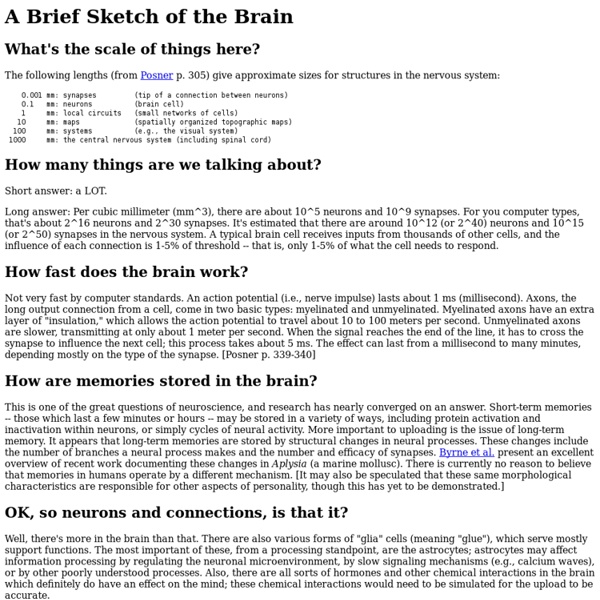 What's the scale of things here? The following lengths (from Posner p. 305) give approximate sizes for structures in the nervous system: 0.001 mm: synapses (tip of a connection between neurons) 0.1 mm: neurons (brain cell) 1 mm: local circuits (small networks of cells) 10 mm: maps (spatially organized topographic maps) 100 mm: systems (e.g., the visual system) 1000 mm: the central nervous system (including spinal cord) How many things are we talking about? Short answer: a LOT. Long answer: Per cubic millimeter (mm^3), there are about 10^5 neurons and 10^9 synapses. How fast does the brain work? Not very fast by computer standards. How are memories stored in the brain? This is one of the great questions of neuroscience, and research has nearly converged on an answer. OK, so neurons and connections, is that it? Well, there's more in the brain than that. More Brain Facts and Figures are available from the University of Washington.

Wirehead hedonism versus paradise-engineering Love Deactivates Brain Areas For Fear, Planning, Critical Social Assessment Love Deactivates Brain Areas For Fear, Planning, Critical Social Assessment Andreas Bartels and Semir Zeki of the Wellcome Department of Imaging Neuroscience, University College London have found using Functional Magnetic Resonance Imaging (fMRI) that love turns down activity in some areas of the brain in part so that we will not see flaws in the object of our affections. However the key result was that it's not just that certain shared areas of the brain are reliably activated in both romantic and maternal love, but also particular locations are deactivated and it's the deactivation which is perhaps most revealing about love. Among other areas, parts of the pre-frontal cortex – a bit of the brain towards the front and implicated in social judgment – seems to get switched off when we are in love and when we love our children, as do areas linked with the experience of negative emotions such as aggression and fear as well as planning. Well, consider the possibilities.

BRAINMETA.COM - NEUROSCIENCE, CONSCIOUSNESS, BRAIN, MIND, MIND-BRAIN, NEUROINFORMATICS, BRAIN MAPS, BRAIN ATLASES Scientists use brain activity analysis to reconstruct words heard by test subjects Scientists have developed technology that is able to reconstruct words heard by test subjects, through analyzing their brain activity (Photo: Elvert Barnes) Image Gallery (2 images) Last September, scientists from the University of California, Berkeley announced that they had developed a method of visually reconstructing images from peoples' minds, by analyzing their brain activity. Much to the dismay of tinfoil hat-wearers everywhere, researchers from that same institution have now developed a somewhat similar system, that is able to reconstruct words that people have heard spoken to them. Instead of being used to violate our civil rights, however, the technology could instead allow the vocally-disabled to "speak." Epilepsy patients were enlisted for the study, who were already getting arrays of electrodes placed on the surface of their brains to identify the source of their seizures. According to study leader Brian N. About the Author Post a CommentRelated Articles

Conscious Entities Thinking About Mortality Changes How We Act THE THOUGHT of shuffling off our mortal coil can make all of us a little squeamish. But avoiding the idea of death entirely means ignoring the role it can play in determining our actions. Consider the following scenario: You’re visiting a friend who lives on the 20th floor of an old inner-city apartment building. Yipes! Or one of your two existential minds—if an emerging theory is correct. Of Two Minds One of our systems of existential thinking responds to the abstract concept of dying, so that even subtle everyday reminders of death, such as driving past a cemetery, prime the mind to ward off existential terror. The second existential system is vivid, concrete and highly personal; it is triggered not by subtle and abstract thoughts but by actually coming face to face with death. Priority Shifts Therefore, some thoughts of death shore up our beliefs, and other types of reflection make us reexamine them.

FDA approves the treatment of brain tumors with electrical fields The NovoTTF treatment involves placing pads onto the patient's skin that creates a low intensity and alternating electric field within the tumor Image Gallery (8 images) The FDA (US Food and Drug Administration) has approved a new treatment for patients as an alternative to chemotherapy. The promising new non-invasive treatment by Novocure uses "Tumor Treating Fields" (NovoTTF) to treat cancerous growths and is now available for adult patients with recurring brain tumors (recurrent glioblastoma or GBM). View all "Our device provides patients and physicians with a novel, non-invasive alternative to chemotherapy that is safe and effective," said Eilon Kirson, M.D., Ph.D., Novocure's Chief Medical Officer. The portable device, which weighs about six pounds (three kg), is used continuously throughout the day by the patient. Glioblastoma is considered an aggressive and common form of primary brain cancer. Novocure also has European marketing approvals for the NovoTTF-100A. Source: Novocure

The biology of dreaming o one would normally consider David Maurice, Ph.D., professor of ocular physiology in the Department of Ophthalmology at Columbia-Presbyterian Medical Center, a revolutionary. Nevertheless, he has reignited a decades-long controversy that could spark a revolutionary re-evaluation of an entire field of behavioral research. Dr. Maurice has developed a startling new line of scientific inquiry that, when added to other findings, could change our understanding of rapid eye movement (REM) sleep and the nature of dreams. What Maurice has done is to suggest an alternative explanation for the phenomenon known as REM sleep, the stage in which the eyes rapidly move and most dreams occur. "Without REM," Maurice told 21stC, "our corneas would starve and suffocate while we are asleep with our eyes closed." Maurice's interest in REM began a few years ago. "What is at stake here is a theory of dreams that is scientifically valid," Dr. Interpretation vs. observation Drs. No final answer in sight Neil B.

Left-handed? Different bodies, different minds We like to think of ourselves as rational creatures, absorbing information, weighing it carefully, and making thoughtful decisions. But, as it turns out, we're kidding ourselves. Over the past few decades, scientists have shown there are many different internal and external factors influencing how we think, feel, communicate, and make decisions at any given moment. One particularly powerful influence may be our own bodies, according to new research reviewed in the December issue of Current Directions in Psychological Science, a journal of the Association for Psychological Science. Cognitive scientist Daniel Casasanto, of The New School for Social Research, has shown that quirks of our bodies affect our thinking in predictable ways, across many different areas of life, from language to mental imagery to emotion. People come in all different shapes and sizes, and people with different kinds of bodies think differently -- an idea Casasanto has termed the 'body-specificity hypothesis.'

What does English sound like to foreign ears? We’ve all heard examples of fake Chinese or German from speakers who lack familiarity with either language. While typically cringe-worthy, these examples do raise interesting questions regarding our own language. What does English sound like to non-English speakers? After more than 40 years, Adriano Celentano’s “Prisencolinensinainciusol” remains one of the most illuminating examples. I think I love it. “Just for the story, in France, when we don’t speak English and we want to imitate the sound, we call it “yaourter”(to yoghourt), the imitation sounds like a very nasal language, kind of like a baby crying. Along similar lines, onomatopoeia (words that imitate or suggest the words they describe) provide amusing insight into the differences between different languages. And here’s a BBC Radio 4 interview with Derek Abbott from the University of Adelaide on animal noises in other languages: Here’s a duck’s quack in Iran, Kenya and Romania: