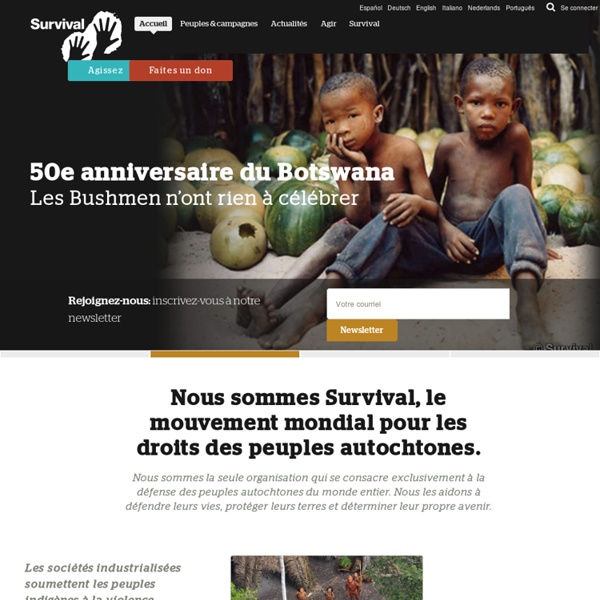 Language Hotspots In the 21st century our planet’s natural resources have become endangered. It is widely accepted that the biosphere—the sum total of the planet’s flora and fauna—is in great peril of collapsing as human populations make a massive impact on the natural world. But what is not widely known is that the human cultural “biosphere” —the sum total of all human cultures living on the planet today—is in even more peril. Over half of the 7,000 languages spoken in the world today are likely to disappear this century, and with them we will lose a wealth of knowledge about human history, culture, and the natural environment.

Convergence The Burrup (Murujuga) is the largest and possibly the oldest rock art precinct in the world. The area is beyond value and as well as being of great archaeological, cultural and artistic merit, it is a storehouse of knowledge and memory. The place is of great significance to indigenous people of the region. Pentagon preparing for mass civil breakdown A US Department of Defense (DoD) research programme is funding universities to model the dynamics, risks and tipping points for large-scale civil unrest across the world, under the supervision of various US military agencies. The multi-million dollar programme is designed to develop immediate and long-term "warfighter-relevant insights" for senior officials and decision makers in "the defense policy community," and to inform policy implemented by "combatant commands." Launched in 2008 – the year of the global banking crisis – the DoD 'Minerva Research Initiative' partners with universities "to improve DoD's basic understanding of the social, cultural, behavioral, and political forces that shape regions of the world of strategic importance to the US." Twitter posts and conversations will be examined "to identify individuals mobilised in a social contagion and when they become mobilised." Among my questions, I asked:

This Image Should NOT be Seen by the Whole World Chief Raoni Metuktire of Brazil’s Kayapó If your response is either “I shared it and this is not what I meant!” or “The ends justify the means!” then consider this: Follow Up Post Immolations scar Miss Tibet contest .:. Miss Tibet By Anantha Subramanyam K BANGALORE, India, 14 February 2013 (DNA) Tenzing Lhamo, a registered nurse based in Madison, US, was crowned Miss Tiber 2013, at the pageant organised by Lobsang Wangyal Productions, held at a Tibetan food joint in Koramangala in Bangalore. Steve Huffman Language Maps Dr. Stephen Huffman Contents Abstract Dr. Huffman has classified the languages of the Ethnologue into broader groupings following Merritt Ruhlen's A Guide to the World's Languages (published 1987, 1991 by Stanford University Press), and has produced as series of maps of language phyla and families using this classified data and several versions the World Language Mapping System and Seamless Digital Chart of the World geographic data sets.

500 Years of Indigenous Resistance 500 Years of Indigenous Resistance © (The San Francisco Aim Chapter's demonstration of October 11, 1992. Protest against 500 Years in San Francisco....courtesy of Bobby Castillo) New technique could boost internet speeds tenfold - Images Researchers at Aalborg University, MIT and Caltech have developed a new mathematically-based technique that can boost internet data speeds by up to 10 times, by making the nodes of a network much smarter and more adaptable. The advance also vastly improves the security of data transmissions, and could find its way into 5G mobile networks, satellite communications and the Internet of Things. View all The problem with TCP/IP Data is sent over the internet in "packets," or small chunks of digital information. The exact format of the packets and the procedure for delivering them to their destination is described by a suite of protocols known as TCP/IP, or the internet protocol suite, designed in the early 70s.

When insensitivity is the norm Indigenous groups in India are often evicted from their lands to make way for dams like this, or other wealth extraction schemes. Donald Lee Pardue under a Creative Commons Licence Survival International's Proud, Not Primitive campaign is asking people to tweet to protest the Indian tourism department promoting 'sightings' of people from the Jarawa tribe as an added attraction in the Andamans. Yes, sightings!

The WILD Foundation - The WILD Foundation The Kayapo Unparalleled Wilderness Conservation Opportunity in the Amazon As the agricultural frontier advances in the lawless Xingu region of southeastern Amazon of Brazil, Kayapo lands are undergoing transformation into a huge island of forest within a sea of deforestation. What is dynamic complexity What is dynamic complexity? Peter Senge and John Sterman, both from MIT's Sloan School of Management, have written lucid explanations of dynamic complexity. 1. Paraguay: deforestation threatening indigenous peoples - Salva le Foreste Details Published: 22 January 2014 Survival International overlapped the deforestation maps produced by the University of Maryland, to the ancestral land of the uncontacted Ayoreo tribe, unveiling that their land is being devastated by the world’s highest rate of deforestation, in the development of cattle ranches. Like many indigenous peoples around the world, the Indians depend on the forest for their survival and have protected it over thousands of years. Paraguay’s Environment Ministry recently caused outrage by granting Brazil-owned ranching companies Yaguarete Pora S.A. and Carlos Casado S.A. (a subsidiary of Spanish construction company Grupo San José) licenses to clear the Ayoreo’s forest, despite it being within a UNESCO biosphere reserve.