Make an Emergency "Get Home Bag" to Keep at Work 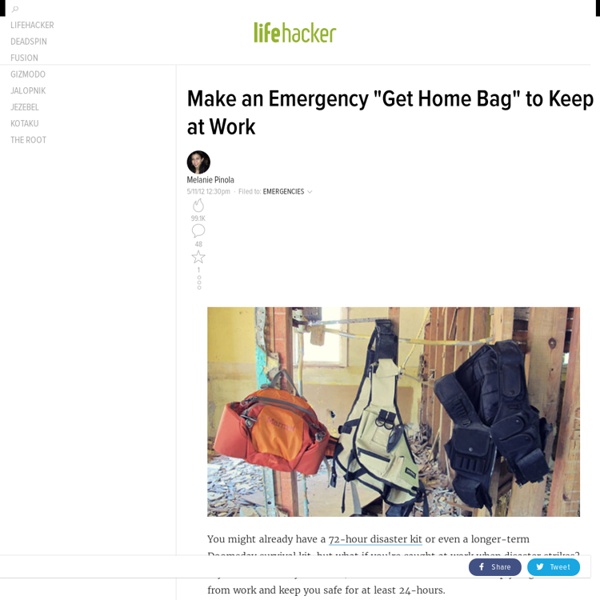 What to Put in a Doomsday (or Disaster) Survival Kit While 2012 is an excuse, there's nothing wrong with being prepared. Just look at Katrina, and the devastation it wrought. My personal wake up call was in 1999 when our city got hit with an October heavy wet snow that basically rendered the entire city without power, sub freezing temps, and obviously no grocery stores open. Everything was liveable after about 72 hours when power was somewhat restored to areas, but our house was without heat for a week. If we had not have had a wood stove and a source of fire, we likely would have been in very bad shape. So now, in my pocket, I always carry: -A source of light (4Sevens Quark currently, or a Surefire E1e) -A blade (currently a Leatherman Squirt P4 and Skeletool) -A source of fire (Needs replaced - but a generic magnesium starter) With those three items, you might survive. -72 hours worth of (very) basic food (instant rice and packaged tun) -32oz of Water in a re-usable bottle -Another cup -5 mylar blankets -Zip ties -Paracord -Tinder

10 day survival pack for your vehicle for just $25 by Jeffrey Yago, P.E., CEM Issue #104 It seems like every winter there are news stories of people getting stranded for weeks in bad weather while driving through the many remote areas of our country. In fact, this past winter, our nation held its breath waiting for news of James Kim and his family who got lost traveling the snowy roads of Josephine County in Oregon, not far from where this magazine is published. While his wife and daughters, who stayed with their vehicle, were eventually found alive, he succumbed to the cold as he hiked through snow looking for help for his family. And there are also many cases of people trapped for days in their vehicles after skidding over a bridge embankment, even though they were only a few hundred feet from a busy highway. I have written many articles about how to prepare your home for a power outage or national emergency, but today I want to address how to be prepared for an emergency when traveling in your car or truck. Keeping warm and safe Finding supplies Drinking water supply

Survival Library | Survival Library Bug-out bag Off-the-shelf Red Cross preparedness kit . A bug-out bag[1][2] is a portable kit that contains the items one would require to survive for seventy-two hours[3][4] when evacuating from a disaster. The focus is on evacuation, rather than long-term survival, distinguishing the bug-out bag from a survival kit, a boating or aviation emergency kit, or a fixed-site disaster supplies kit. The term "bug-out bag" is related to, and possibly derived from, the "bail-out bag" emergency kit many military aviators carry. Other names for such a bag are a BOB,[7] 72-hour kit,[8] a grab bag,[9] a battle box, a Personal Emergency Relocation Kits (PERK), a go bag or a GOOD bag (Get Out Of Dodge) INCHbag (I'm Never Coming Home).[10] Rationale[edit] In addition to allowing one to survive a disaster evacuation, a bug-out bag may also be used when sheltering in place as a response to emergencies such as house fires, blackouts, tornadoes, and other severe natural disasters. Typical contents[edit] See also[edit]

Fight Smart Fight Smart! Ancient Chinese Strategies Can Bring Victory In The Sparring Ring. By Stefan Verstappen Originally published in Black Belt Magazine Jan 2000 When martial artists train in sparring the emphasis is usually on how to become stronger and faster than your opponent but there are two drawbacks to relying on this type of training. To improve one's chances of success in any form of combat one would need some advantage other than force alone. The following three strategies come from The Thirty-Six Strategies. Create Something From Nothing Use the same feint twice. This is one of the first strategies fighters learn as they gain experience since it is easy to execute and often quite effective. The typical combo is front snap kick aimed mid-level, followed by a jab and reverse punch. Even if the opponent is able step out of range of the high attack he will almost always raise his hands in reaction to the initial attack leaving his midsection undefended against the follow-up leg attack.

spearthrower Identifying Animal Tracks Identifying animal tracks & sign, as well as interpreting and trailing, are primary skills of the wildlife tracker. Historically, animal tracking skills helped people find food, avoid dangerous predators, and read the stories on the landscape. Wildlife tracking skills continue to be valuable today and are being employed in wildlife research, conservation, and outdoor education. Identifying animal tracks and sign can open up an unseen world, a window into the lives of shy and elusive animals. Tracks, scat, feeding sign, beds, scent marking, trails and other types of animal sign point to which animals passed by, what they did, where they went, and much more. Seemingly barren ground becomes alive with a diversity of fascinating information. This section of the online library contains an expanding offering of animal tracking articles, as well as many pictures of animal tracks & sign. You can peruse the articles below and/or sign up to the Alderleaf eNewsletter to get updates on new articles.

Best places in the U.S. to survive the apocalypse: Silohome Interested in uplifting stories on the natural world, sustainable communities, simple food, and new thinking on how to live well? Please enter a valid email address and try again! No thanks