Pack for Mac: Our List of the Best Free Mac Apps 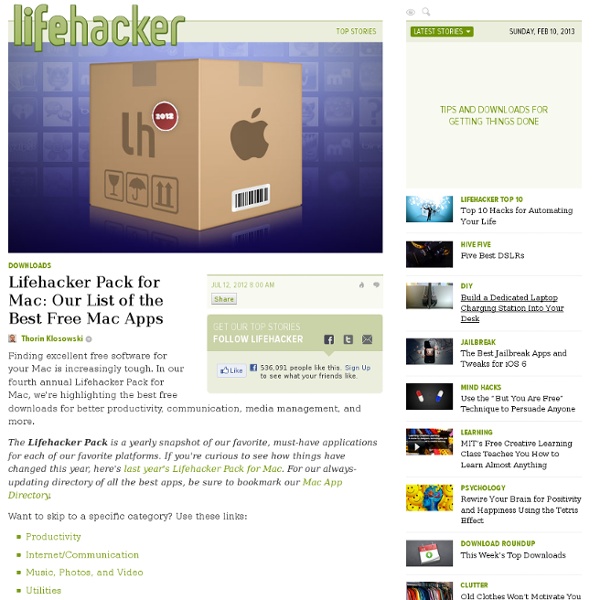 Finding excellent free software for your Mac is increasingly tough. In our fourth annual Lifehacker Pack for Mac, we're highlighting the best free downloads for better productivity, communication, media management, and more. The Lifehacker Pack is a yearly snapshot of our favorite, must-have applications for each of our favorite platforms. If you're curious to see how things have changed this year, here's last year's Lifehacker Pack for Mac. Want to skip to a specific category? Productivity Quicksilver Simply put, Quicksilver makes everything you do on your Mac easier. Download Page Notational Velocity What makes Notational Velocity great is that it has the exact amount of features needed in a note taking app with no fluff. Download Page DashExpander Text expansion is one those pieces of productivity software that most people only associate with power users, but it's incredibly handy for just about everyone. Download Page Wunderlist Download Page Internet/Communication Chrome Download Page Adium Related:  shaundonnelly

Who needs to pirate software with a list like this? [Archive] - Jatland Forums 3D Graphics: 3Delight Free - Anim8or - Aqsis - Blender - Houdini (Free Edition) - Now3D - OpenFX - POV-Ray - SOFTIMAGE|XSI EXP - Terragen - Toxic - Wings 3D - Anti-Virus: a-squared - AntiVir - Avast - AVG - BitDefender - ClamWin - Audio Players: 1by1 - Billy - Defrag Software: DIRMS & Buzzsaw - OpenVMS - Download and Install Google Fonts on your Computer Google Fonts are beautiful web fonts that can be used without restrictions. You can download and install Google Fonts on your computer for writing Office documents. Google Fonts is an absolutely awesome collection of web fonts that you may use in your HTML web pages without any restrictions. These fonts not only look more beautiful than the common typefaces like Arial and Verdana but they are more readable as well since the fonts have been designed specifically for the web. Also, all Google web fonts are offered under the Open Font License meaning you may use them even in commercial projects without having to worry about licensing issues. Google Fonts are hosted on google.com and all you need to do is include a few lines of CSS (or JavaScript) to embed one or more of these fonts in your web pages. Other than websites, you may also use Google fonts in your Office documents, Photoshop designs or any other computer program. There’s no trick involved here. How to Download Google Fonts?

New App Recap: July 28, 2014 Posted 07/28/2014 at 3:08pm | by J.R. Bookwalter 1 of 9 View the full image This week's app gallery assembles a number of promising newcomers along with return of a Bitcoin payments app and significant new updates to a pair of popular productivity apps. Discounted for a limited time, Fantastical 2.1 ($4.99, iPhone; $9.99, iPad) adds the ability to snooze event or reminder notifications, upcoming birthday notifications and see or hide app icon badges.

Free Portable Software USB Flash Drive Applications | Pendriveapps Top 10 Hardware Boosting Hacks I just did the pogoplug hack this weekend. The LH article is outdated, but the info is available online at ArchLinuxARM.org. I'm not sure rooting a pogoplug is worth the bother now. Rasberry Pi is now available, unless $30, two extra USB ports and Gigabit ethernet is critically important, the RasPi blows the pogoplug out of the water (the additional IO is nice, but the real win is a larger developer community). I did get a pogoplug with the intention of rooting it but realised that its was much more useful to me as it stood. I realize this is article is a few days old, but I just wanted to second this. Now I've just got to figure out what I want to put on it... It's a fun project. I tried running Subsonic, which I used to serve up media from my old computer, but the pogoplug doesn't seem to have enough horsepower for on-the-fly LAME transcoding.

Free File Downloads and Software Discussion - Fileforum The 101 Most Useful Websites on the Internet Here are the most useful websites on the Internet that will make you smarter, increase productivity and help you learn new skills. These incredibly useful websites solve at least one problem really well. And they all have cool URLs that are easy to memorize thus saving you a trip to Google. Also see: The Best Android Apps Also see: The Best Mac Apps and Utilities seatguru.com – consult this site before choosing a seat for your next flight.webmakerapp.com — an offline playground for building web projects in HTML, CSS and JavaScript. See: The Most Useful Tools for Programmers Also see: The Best Add-ons for Gmail, Docs and Sheets whereami — find the postal address of your current location on Google maps.sway.com — create and share interactive reports, newsletters, presentations, and for storytelling. Also see: The Best Websites to Learn Coding