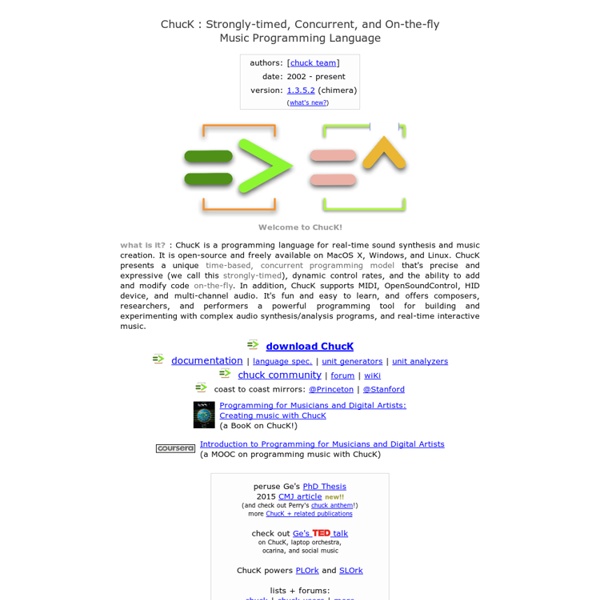 freesound :: home page Explore, Play, Discover: Websites & Activities Search form Search Low-cost, teacher-tested activities for the classroom and the curious. Science of Cooking • Explore the science behind food and cooking with recipes, activities, and Webcasts.PreviousNext Explore, Play, Discover: Websites, Activities, and More Auroras: Paintings in the Sky Far north in the night sky, a faint glow appears on the horizon. Feeling Pressured Feel atmospheric pressure changes by stepping into a garbage bag. Camera Obscura Take the Beat Back Uncover the everyday origins of some extraordinary instruments. The Cold Water Candy Test Science of Baseball What's the science behind a home run? Arctic Seals These unique – and uniquely beautiful – seal species spend their lives amid the sea ice Plant Hybrids If you're a patient gardener, you can grow your own hybrid flowers. 2016 Total Solar Eclipse Telescope View Watch the telescope view of the entire 2016 total solar eclipse in Micronesia. Energy from Death Slinky in Hand Make waves without getting wet. Cheshire Cat Pages explore Connect

Beat Zampler argot .com : dictionary of street drug ( cannabis, marijuana, heroin, cocaine, et al. ) slang 12 Reaper tips and tricks you need to know | Reaper | Tech Tuition MusicRadar users dig Reaper - in fact, you recently voted it your favourite DAW. This cross-platform application has a tiny installer (just 8MB, in fact), yet boasts powerful features that put it on a par with many of its more expensive rivals. What's more, those who've been frustrated by other DAWs frequently report that it's easier to use. If you're just getting acquainted with the software - or you're considering trying it for the first time - here are 12 things to bear in mind… 1. If you're stuck with a dodgy vocal take, don't panic - you might be able to get away without re-recording it. 2. When using lots of plug-in instruments and effects, you may find yourself running out of CPU power. 3. One cool way to streamline your workflow is to save commonly-used combinations of instruments or effects as FX chains. 4. Stuck for inspiration? 5. These days, many DAWs eschew multiple floating windows and instead opt for a single-window approach. 6. Need to beef up a track in a hurry? 7. 8.

Online Books : "The Essential Psychedelic Guide" - LSD INTENSITY: 3 to 7 for most experiences. MATERIAL: LSD is a synthetic compound. It is derived from Iysergic acid which is found in Hawaiian Woodrose and Morning Glory seeds, or Ergot fungus, which can grow on rye, wheat, and other grams. Lysergic acid is also psychoactive, although not nearly as potent as LSD, and has been consumed for millennia in the form of the above mentioned plant sources. The most common street name for LSD is "acid." HISTORY: LSD was first synthesized in 1938 by Dr. During the next 20 years LSD was promoted as a psychiatric aid and numerous experiments were performed in clinical settings. In the early Sixties Timothy Leary and friends began spreading the word that LSD produces magnificent spiritual experiences. DOSAGE: LSD is extremely potent by weight and the amount required for a single dose is barely visible to the naked eye. 100 mcg. of LSD is considered a minimum psychedelic dose. LSD is the most transparent of the psychedelics. 1. 2.

Reworking of old classical rock with postmodern Dubstep | CCTP725: Cultural Hybridity: Remix and Dialogic Culture Aena Cho Zeds Dead is a Canadian electronic music duo from Toronto, Ontario composed of two members: Dylan Mamid, or DC, and Zach Rapp-Rovan, or Hooks (Wikipedia). They explore a diverse variety of genres that amalgamate aspects of electro house, hip-hop, glitch, and drum and bass into their largely dubstep platform. In “Gimmie Shelter”, they take The Rolling Stone’s music and deconstruct and fragment it, almost beyond recognition. This mix of the two completely different genres of music, the classical rock and roll of the 60s and the complete anarchy of dubstep, is definitely unique, and a very post-modernistic way of reworking the past from a historical perspective. Zeds Dead’s “White Satin” which is based on Moody Blues’s “Night in white satin” is another good example of such musical dialogic process. Dubstep, which Zeds Dead music is based on, is a new, hybrid music genre of the postmodernism era which came out of the modern electronic dance music in the late 90s. Zeds Dead.

Truths That Women Have About Men We all know women keep certain things from men (men from women too but that’s later), not a surprise to many of you. Here’s a few of them: My best friend knows everything.Even if i insist on paying/splitting the bill on our first date. I’ll think you’re cheap if you let me.I sleep/keep your clothes because they smell like you.I’ll never tell the truth about how many guys I’ve slept with.I’m constantly testing you.I masturbate. Maybe, As regularly as you do.I think about sex with you. Women aren’t alone in this though (I foresaw the sexist comments I was about to receive), men also keep things from women.

Getting There: Which DAW Should I Use? When it comes to music software, there are a ton of different options out there. While it seems like there's a mountain of software to learn, most applications actually follow the same type methodology. Most DAW's operate basically the same with variations in functions and features. Then there are other types of software that don't fit our definition of a DAW but 'specialize' in specific approaches and functions. We've talked about the basics before here. Today we're going to discuss the similarities, differences, strengths and weaknesses of the various applications. Most of the time we refer to music applications as DAW's but this can misleading, and in some cases just wrong. What's A DAW? The official title is 'Digital Audio Workstation'. Workflow It's really just a question of work-flow. Which One For Me? So which do I want to use? The Standards The standards are of the 'regular' DAW's that we all familiar with. The Rebels Notation Programs Another type of DAW is the notation programs.

For composing movie/Tv scores? :: MakeMusic Forum First off, do not feel that buying from a single sample maker necessarily is the best strategy. Mixing and matching different libraries can often yield better results, though it is a bit trickier to mix different libraries from different manufacturers and have them blend together nicely, because they were recorded in different rooms, etc. I will first of all look at the full orchestral libraries from major manufacturers: - GPO: usually the first library that people work with because it is bundled with notation software and is very inexpensive. Nobody uses this for film scoring, except for doing drafts which will be replaced by better samples later. If you are mixing and matching.. we can look at options for individual sections (there are other options I haven't listed, but those are not as powerful or useful, or modern as these.. the ones I list are the ones most composers today are using): Strings: Brass: Woodwinds: - VSL Woodwinds - still the best. Orchestral Percussion: Pianos: