Game of Thrones Season 5: A Day in the Life (HBO) Alcazar of Seville (Spain) The Alcázar of Seville (Spanish "Reales Alcázares de Sevilla" or "Royal Alcazars of Seville", (Spanish pronunciation: [alˈkaθar])) is a royal palace in Seville, Spain, originally a Moorish fort. 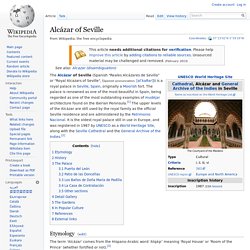 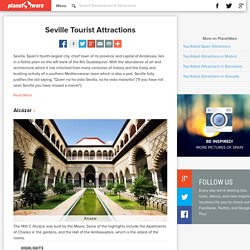 With the abundance of art and architecture which it has inherited from many centuries of history and the lively and bustling activity of a southern Mediterranean town which is also a port, Seville fully justifies the old saying, "Quien no ha visto Sevilla, no ha visto maravilla" ("If you have not seen Seville you have missed a marvel"). Seville was the birthplace of two famous painters, Diego Velázquez (1599-1660) and Bartolomé Esteban Murillo (1617-82). Meereen Arena. Osuna - locations prediction. Roman bridge of Córdoba. The Roman bridge of Córdoba is a bridge in the Historic centre of Córdoba, Andalusia, southern Spain, built in the early 1st century BC across the Guadalquivir river. 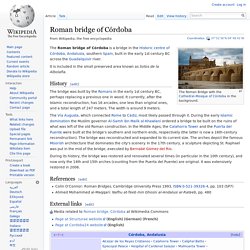 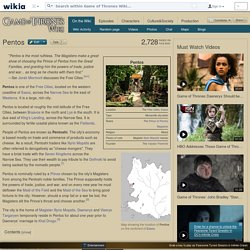 Game of Thrones had done a good job of making sure Essos and the Free Cities across the Narrow Sea stay fresh in viewer’s minds, but lately that focus, when not on the cities around Slaver’s Bay, has been in Braavos, home of the Iron Bank as well as Arya’s friend Jaqen H’ghar. 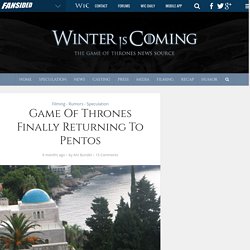 But as more characters make the crossing away from Westeros, the map of Essos will start to become as wide as its western counterpart. To that end, it looks like the show will be returning to where we originally began in Essos back in Season 1: Pentos, the Free City on the Bay, and home of Illyrio Mopatis. Los Siete Reinos has a few pictures they claim are part of the return to Illyrio’s, this time by new Westerosi exiles. (Update: the pics were posted earlier at Watchers On The Wall). More pics, followed by noted speculation and spoilers, below…. This is footage from Villa Sheherezade, a luxury hotel in Dubrovnik, which sources claim is where Illyrio’s house will be filmed this coming season. Šibenik Cathedral. The Cathedral of St. 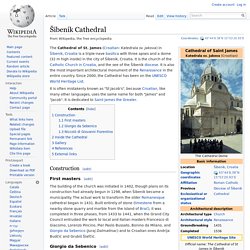 James (Croatian: Katedrala sv. Jakova) in Šibenik, Croatia is a triple-nave basilica with three apses and a dome (32 m high inside) in the city of Šibenik, Croatia. It is the church of the Catholic Church in Croatia, and the see of the Šibenik diocese. It is also the most important architectural monument of the Renaissance in the entire country. Since 2000, the Cathedral has been on the UNESCO World Heritage List. It is often mistakenly known as "St Jacob's", because Croatian, like many other languages, uses the same name for both "James" and "Jacob". Construction[edit] First masters[edit]

Stradun (street) There are signs that an exciting and much anticipated scene from ADWD is now being filmed in Dubrovnik, Croatia. 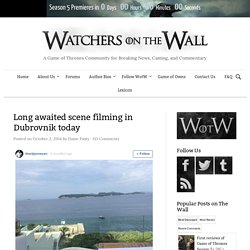 The Mountain, played by Thor Bjornsson (aka, the 2014 Strongest Man in the World) posted a picture of Dubrovnik this morning. In addition Seek New Travel is indicating that Lena Headey and Diana Rigg have been sighted and that security on the location has been cranked up to 11. But never fear, the intrepid fans of GoT always find a way – meaning there are also fan photos and videos floating around out there. 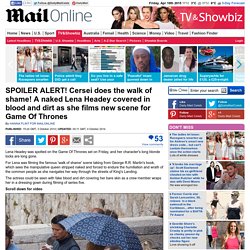 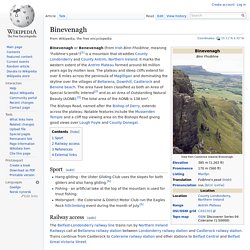 It marks the western extent of the Antrim Plateau formed around 60 million years ago by molten lava. The plateau and steep cliffs extend for over 6 miles across the peninsula of Magilligan and dominating the skyline over the villages of Bellarena, Downhill, Castlerock and Benone beach. The area have been classified as both an Area of Special Scientific Interest[2] and as an Area of Outstanding Natural Beauty (AONB).[3] The total area of the AONB is 138 km². The Bishops Road, named after the Bishop of Derry, extends across the plateau. Notable features include the Mussenden Temple and a cliff top viewing area on the Bishops Road giving good views over Lough Foyle and County Donegal. Sport[edit] Railway access[edit] References[edit] External links[edit] By Bella Brennan for MailOnline and Jennifer Pearson Published: 19:19 GMT, 23 September 2014 | Updated: 19:52 GMT, 23 September 2014 Earlier in the month the Game Of Thrones cast and crew resumed filming for season five in Dubrovnik, Croatia. 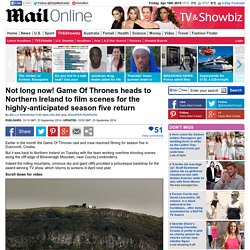 But it was back to Northern Ireland on Tuesday with the team working overtime shooting scenes along the cliff edge of Binevenagh Mountain, near County Londonderry. Indeed the rolling mountains, ominous sky and giant cliffs provided a picturesque backdrop for the award-winning TV show, which returns to screens in April next year.

Scroll down for video Hard at work! Stunning scenery: The ominous sky and tall mountains made for an idyllic backdrop According to locals great measures have been taken to ensure no spoilers are leaked with road closures on Leighery Road. Meanwhile in June the long-awaited season four finale of HBO's Game Of Thrones aried and delivered more action-packed fight scenes and angry dragons that won't be tamed. Enlarge 01 of 18 By Ciaran Barnes – 09 March 2015 Republican terrorists planned to leave a bomb next to a catering unit at the Paint Hall Titanic Studios where former cops, who were working on the set of the hit HBO show, were gathering for meals.

Sunday Life has seen security documents that reveal the conspiracy was foiled after a tip-off from an informant. Details were passed by an agent to an ex-police officer, who immediately contacted DUP East Antrim MP Sammy Wilson. The politician then informed PSNI chiefs who quickly put in a place a sophisticated operation to protect personnel at the site. Mr Wilson declined to comment when approached by this newspaper, but we can confirm that the threat was so serious PSNI Deputy Chief Constable Drew Harris was briefed.

The terrorists were tipped off that a number of ex-security force personnel had been working on the site where hit TV show was being filmed at the time. By Tim Pelan The Painthall of the former Harland and Wolff shipyard in Belfast’s Queen’s Island is the immense construction where workers once painted component parts of the mighty ships that followed such majestic liners as the Olympic and the Titanic. Out of the ashes of the industrial past, a new booming industry is gathering remarkable pace. Now they are filmmaking, not shipbuilding, within this unprepossessing building. Set on an eight-acre site five minutes from central Belfast, the Painthall, run by Northern Ireland Screen, contains four 16,000sq ft “cells”.