News, sport and opinion from the Guardian's global edition 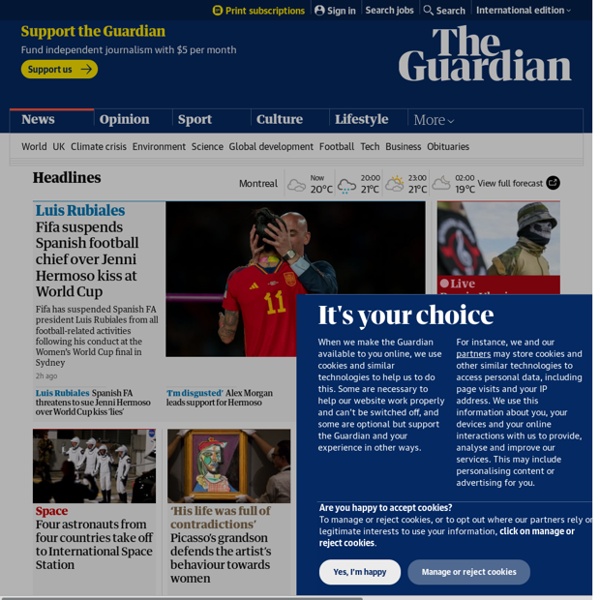 Related:  more to do during lockdown • Anglais • Presse

Jacinda Ardern and ministers take pay cut in solidarity with those hit by Covid-19 New Zealand’s prime minister has said she and other ministers will take a 20% pay cut lasting six months to show solidarity with those affected by the coronavirus outbreak, as the death toll continues to rise. Jacinda Ardern said it was important the government’s most highly paid politicians show “leadership and solidarity” with workers on the frontline and those who had lost their livelihoods. Ardern, government ministers and public service chief executives will take the cut for six months, effective immediately. The pay cut will reduce Ardern’s salary by $47,104. Cabinet ministers would take a cut of NZ$26,900 each, while deputy prime minister Winston Peters’ salary would be cut by $33,473. Dr Ashley Bloomfield, the director-general of health who has led the elimination response to the crisis, confirmed he would “definitely” take a pay cut too, as would opposition leader Simon Bridges.

Behemoth, bully, thief: how the English language is taking over the planet On 16 May, a lawyer named Aaron Schlossberg was in a New York cafe when he heard several members of staff speaking Spanish. He reacted with immediate fury, threatening to call US Immigration and Customs Enforcement and telling one employee: “Your staff is speaking Spanish to customers when they should be speaking English … This is America.” A video of the incident quickly went viral, drawing widespread scorn. The Yelp page for his law firm was flooded with one-star reviews, and Schlossberg was soon confronted with a “fiesta” protest in front of his Manhattan apartment building, which included a crowd-funded taco truck and mariachi band to serenade him on the way to work.

The Japan times Japan’s postwar pacifism will face a critical challenge this year that could drastically change the course of this country forever: the July Upper House election. Right-leaning parties, most notably the ruling Liberal Democratic Party led by Prime Minister Shinzo Abe, will try to capture more than two-thirds of the 242-seat chamber in the election, and thus have the seats required to initiate a national referendum to revise the war-renouncing Constitution. But which parties currently advocate constitutional revision? And how many seats are those parties likely to win in the election? The following are questions and answers on the numbers in the election and the prospects for the political battle over the Constitution.

Home BBC News Home Top Stories Trump to drop Iran deal, Macron says France's leader admits he may have failed to persuade his US counterpart to stick to the 2015 accord. Related content Video Shakespeare, pub quizzes and rainbows: the upside of lockdown We are living in unprecedented times and across the country people are coming together in unprecedented ways – whether it’s through the power of social media, art or Shakespeare. Virtual pub quiz accidentally goes viral and raises £90,000 for NHS Unable to attend his usual pub quiz after the coronavirus lockdown came into effect, Jay Flynn decided to organise a virtual quiz with his friends through a Facebook event – when he checked back a couple of days later, over 30,000 people had signed up. “I’m not very good at social media and I’d set it public by mistake,” he explained.

happy English is a West Germanic language that was first spoken in early medieval England and is now a global lingua franca. Named after the Angles, one of the Germanic tribes that migrated to the area of Britain that would later take their name, England, both names ultimately deriving from the Anglia peninsula in the Baltic Sea. It is closely related to the Frisian languages, but its vocabulary has been significantly influenced by other Germanic languages, particularly Norse (a North Germanic language), as well as by Latin and French.[6] Challenging Abe’s Japan The new issue of Jacobin, centering on development and the Global South, is out now. To celebrate its release, new subscriptions start at only $14.95. Since the earthquakes and a nuclear meltdown in Fukushima hit eastern Japan in March 2011, fissures have opened up across the surface of the Japanese archipelago — and across the surface of Japanese society. Contemporary Japan is freighted with the triple weight of historical memory, natural disaster, and austerity — a situation sustained and compounded by the regime of Shinzō Abe, the most conservative prime minister the country has seen since World War II. But there are signs that this unstable status quo is producing its own revolts and generating its own forces of resistance at the core of Japanese society. What explains this seemingly sudden explosion?