How false news can spread 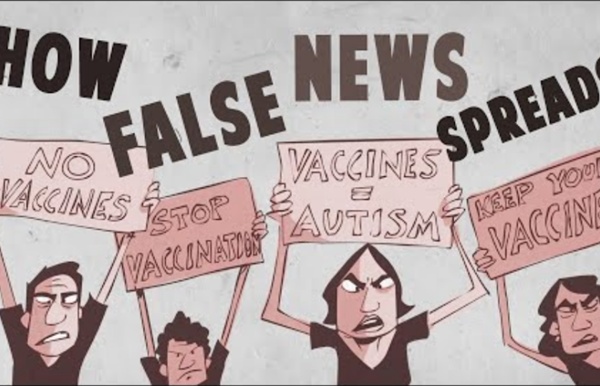 The information war is real, and we’re losing it A University of Washington professor started studying social networks to help people respond to disasters. But she got dragged down a rabbit hole of twitter-boosted conspiracy theories, and ended up mapping our political moment. It started with the Boston marathon bombing, four years ago. How to tell if you’re talking to a bot Twitter recently took drastic action as part of an effort to slow the spread of misinformation through its platform, shutting down more than two million automated accounts, or bots. But Twitter shuttered only the most egregious, and obvious, offenders. You can expect the tricksters to up their game when it comes to disguising fake users as real ones. It’s important not to be swayed by fake accounts or waste your time arguing with them, and identifying bots in a Twitter thread has become a strange version of the Turing test. Accusing posters of being bots has even become an oddly satisfying way to insult their intelligence. Advances in machine learning hint at how bots could become more humanlike.

YALSA Teen Literacies Toolkit Download the print version (PDF) or view the web version. Created by the Literacies Toolkit Resource Retreat Participants August 2017 About the Kit In this toolkit, we use the “fake news” phenomenon as an approach to addressing multiple literacies. Essential Apps for the Physical and Digital K-12 Classroom As educators face uncertainties this fall, it helps to focus on a few things that are certain. The modern classroom is more than a physical room—it’s also a digital space for learning and collaboration. As I look at the fall, I'm certain that no matter what happens, my students and I will need to master our digital classroom.

The Fake-News Fad: Let it Fade Have you heard the news? We have a new four-letter word featuring an “F” and a “K” in our lexicon: It is F-A-K-E. The 2016 Presidential election campaign made fake news one of the hottest topics in—ahem—the news. Shortly after President Trump’s inauguration, “alternative facts” stole the limelight for a brief period, but the fascination with fake news persists.

The (almost) complete history of 'fake news' Image copyright Alamy In record time, the phrase morphed from a description of a social media phenomenon into a journalistic cliche and an angry political slur. How did the term "fake news" evolve - and what's next in the world of disinformation? It was mid-2016, and Buzzfeed's media editor, Craig Silverman, noticed a funny stream of completely made-up stories that seemed to originate from one small Eastern European town. Not all scientific studies are created equal - David H. "A popular study from the 1970s that helps sell millions of dollars' worth of fish oil supplements worldwide is deeply flawed, according to a new study being published in the Canadian Journal of Cardiology. The original study, by Danish physicians H.O. Bang and D.J.

The urgent need for media literacy in an age of annihilation From fictitious organizations posting polarizing messages on Facebook to robustly researched news stories being labelled “fake,” the pervasive power and importance of the media are clear. And yet what is most concerning is not that fictitious stories are being shared as “real” and well-researched stories are labelled “fake.” Rather, the biggest problem is the lack of stories about how to thoughtfully address the situation not only through media regulation but also through education. By focusing on media challenges one at a time as they arise, an opportunity is being missed to address the media’s messages and power systemically. Instead, in something akin to a “whack-a-mole” game, problems with social media are treated as isolated issues that keep popping up.

Fake news and the future of journalism “Every public has its own universe of discourse and…humanly speaking, a fact is only a fact in some universe of discourse.” Writing those words three quarters of a century before the Oxford Dictionaries named “post-truth” the 2016 word of the year, Robert Park — a former newspaper journalist and one of the founders of the Chicago School of sociology — understood fake news to be an intrinsic element of any information ecology. Long before Mark Zuckerberg started to be treated as a rapacious business man, noted real and fictitious publishers such as William Randolph Hearst and Charles Foster Kane aimed to exploit the commercial potential of fake news, as did others who predated and succeeded them. On top of intentional attempts to distort or misinform, many unintentional mistakes caught by the public — and a suspicion that there might exist more unidentified ones — have further reinforced a certain stance of skepticism among media audiences over the inherent veracity of the news report.

How biased is your news source? You probably won’t agree with this chart Are we even aware of our biases anymore? If you look at this chart and are convinced your “extreme” source belongs in the middle, you just might be part of the problem plaguing America today. “In the past, national evening news programs, local evening news programs, and the front pages of print newspapers were dominated by fact-reporting stories,” says the chart’s creator, patent attorney Vanessa Otero. “Now, however, many sources people consider to be ‘news sources’ are actually dominated by analysis and opinion pieces.” She released the first version of the chart back in 2016, and she’s updated it several times since. Over the past year, it’s gone viral, with thousands of educators at both the high school and college levels using the compelling visual.

How to Spot Fake News: Lesson Plan for Grades 9-12 Concerns about the proliferation of "fake news" on social media surfaced as early as 2014 as adults and students increased their use of social media platforms for gaining information about current events. This lesson asks students to think critically by analyzing a news story and satire of the same event in order to explore how each can lead to different interpretation. Estimated Time: Two 45-minute class periods (extension assignments if desired) The Complete Guide To Twitter Hashtags For Education What is a hashtag? A word or phrase preceded by a “#.” How do hashtags work?