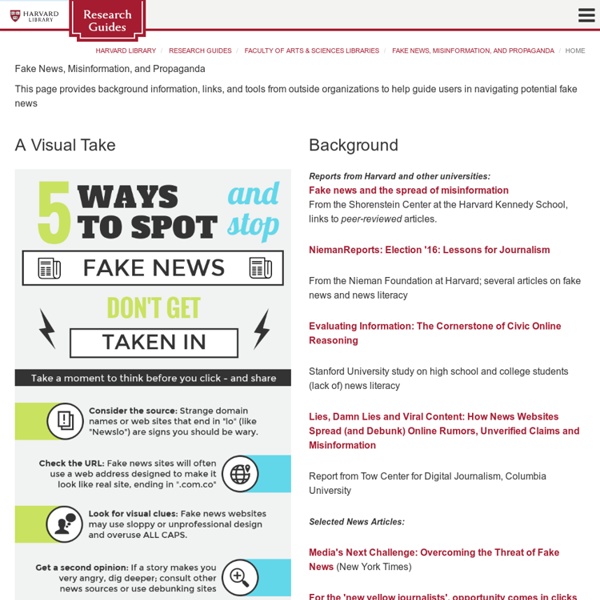 How to choose your news - Damon Brown How the media landscape has changed Media visionary Clay Shirky gave a TED Talk on how the media landscape has changed. “The moment we’re living through, the moment our historical generation is living through, is the largest increase in expressive capability in human history.” In other words, the amount of information we are capable of capturing is unprecedented. As a result, we need new techniques to filter through the information and need to work much harder than previous generation to better understand our world. Watch Clay Shirky’s fascinating media discussion on TED-Ed.

'Boys On The Bus': 40 Years Later, Many Are Girls Reporters surround Sens. George McGovern (left) and Hubert Humphrey after a Democratic presidential debate in 1972. George Brich/AP hide caption toggle caption George Brich/AP The Definitive List of 176 Fake News Sites on Facebook Fake news is unavoidable. While the idea of “fake news” was born out of the very real instances of fake news stories helping sway the election in favor of now-President Donald Trump, it has since been co-opted by Trump’s administration to be used as a weapon to sow doubt in legitimate media stories that they find unappealing. But real fake news—not the kind Trump likes to point out on Twitter virtually every day—is pervasive. And if you care about reading truthful stories, you need to be on high alert. Facebook, a primary driver of traffic to publications, came under fire late last year for allowing the promotion of fake news sites that deal in conspiracy theories rather than facts. Some Facebook employees even reportedly revolted and took matters into their own hands before the company took steps to reduce fake news.

Covering the White House: “Who Ya Gonna Believe?” - The New Yorker Radio Hour The media’s relationship with a President has never been more contentious than in this Administration. Journalists are struggling to keep up with hard-to-believe news and what Kellyanne Conway described as the “alternative facts,” also called lies, by official sources. Ben Smith, the editor-in-chief of BuzzFeed, walks David Remnick through his decision to publish an unverified dossier that alleges Donald Trump’s secret ties to Russia. Critics argued that BuzzFeed’s “decide for yourself” attitude toward publication undermines the public’s trust in the media at this precarious moment. Stony Brook Center for News Literacy The full News Literacy course, developed at Stony Brook University, organizes the material into 8 concepts that are spread amongst our 14 week course that take students from the first information revolution of Johannes Gutenberg's printing press to the Digital Age of Mark Zuckerberg's Facebook. Each lesson stands alone or can easily be integrated into your program. Below, find a summary of each of those lessons, and a link to the most updated version of the teaching materials for each from our professors at Stony Brook University. Each of the following Course Packs include PowerPoint presentations, associated media, lecture notes, and recitation materials.

How To Spot Fake News Critical thinking is a key skill in media and information literacy, and the mission of libraries is to educate and advocate its importance. Discussions about fake news has led to a new focus on media literacy more broadly, and the role of libraries and other education institutions in providing this. When Oxford Dictionaries announced post-truth was Word of the Year 2016, we as librarians realise action is needed to educate and advocate for critical thinking – a crucial skill when navigating the information society. IFLA has made this infographic with eight simple steps (based on FactCheck.org’s 2016 article How to Spot Fake News) to discover the verifiability of a given news-piece in front of you. Download, print, translate, and share – at home, at your library, in your local community, and on social media networks. The more we crowdsource our wisdom, the wiser the world becomes.

Students Reject 'Fake News' To Write Footnoted, Neutral Wikipedia Entries : NPR Ed Fake news has been, well, in the news a lot lately. But for the world's largest crowdsourced encyclopedia, it's nothing new. "Wikipedia has been dealing with fake news since it started 16 years ago," notes LiAnna Davis, deputy director of the Wiki Education Foundation.

#alternativefacts Propaganda (noun): Information that is often exaggerated or false and spread for the purpose of benefiting or promoting a specific individual or cause. Fake news is, quite simply, news (“material reported in a newspaper or news periodical or on a newscast”) that is fake (“false, counterfeit”) - #alternativefacts Spin Journalism (noun): News and information that is manipulated or slanted to affect its interpretation and influence public opinion. Opinion (noun): A belief or judgment that rests on grounds insufficient to produce complete certainty.

A Guide to Fake News Websites Satire is a venerable form of social commentary that uses humor to ridicule human vices and follies. The Internet is rife with it, especially news satire, or fake news, in which fictionalized accounts of current events are presented in mock-journalistic style to lampoon politicians, celebrities, and social mores. Satire is only effective if people recognize it as such, however, and therein lies a major pitfall of publishing fake news on the Internet. Users tend to skim texts instead of reading them, missing important clues and disclaimers. The mechanics of social sharing obscure the origin and aim of viral content, increasing the likelihood that fiction will be mistaken for, or purposely misrepresented as, fact.

Episode 63: Late-Night Icon David Letterman and Songwriter Jason Isbell Our privacy promise The New Yorker's Strongbox is designed to let you communicate with our writers and editors with greater anonymity and security than afforded by conventional e-mail. When you visit or use our public Strongbox server at The New Yorker and our parent company, Condé Nast, will not record your I.P. address or information about your browser, computer, or operating system, nor will we embed third-party content or deliver cookies to your browser. Strongbox servers are under the physical control of The New Yorker and Condé Nast. Strongbox is designed to be accessed only through a “hidden service” on the Tor anonymity network, which is set up to conceal both your online and physical location from us and to offer full end-to-end encryption for your communications with us. This provides a higher level of security and anonymity in your communication with us than afforded by standard e-mail or unencrypted Web forms.