The Honest Truth about Fake News 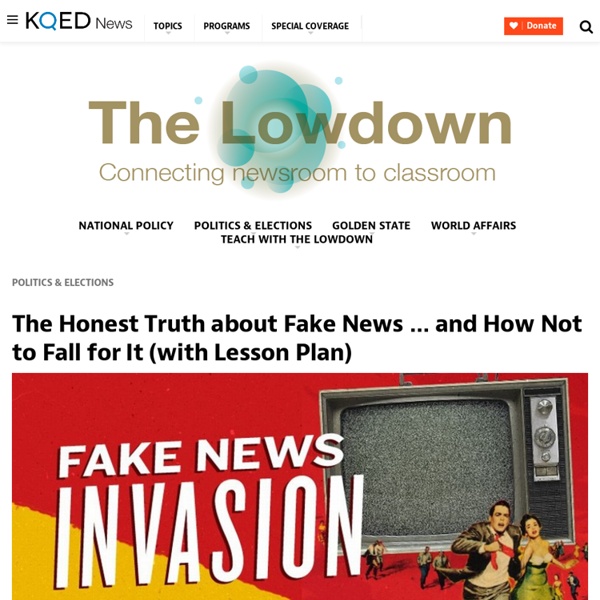 Did you hear that Pope Francis endorsed Donald Trump for president? Or that Hillary Clinton sold weapons to ISIS? Crazy, right? And … 100 percent false. But if you were one of the millions of people drawn to a bogus headline in your Facebook feed — or other social media platform of choice — and found yourself reading an article on what seemed like a legitimate news site (something like, say, The Political Insider, which “reported” the Clinton-ISIS story), then why wouldn’t you believe it? I mean, people you supposedly trust shared it with you and it ranked high in the Google search. Welcome to the world of “fake news.” Digital deception It comes as little surprise that the web is chock full of commercial click-bait hoaxes: get-rich-quick schemes, free Caribbean cruises, erectile dysfunction treatments … you name it. But as it turns out, the internet is also teeming with bogus information sites that masquerade as real news. Fake news, real profit, serious consequences Fake news is nothing new

How to choose your news How the media landscape has changed Media visionary Clay Shirky gave a TED Talk on how the media landscape has changed. “The moment we’re living through, the moment our historical generation is living through, is the largest increase in expressive capability in human history.” In other words, the amount of information we are capable of capturing is unprecedented. Here’s a handy cheat sheet of false and misleading “news” sites Earlier this month, the California department of health released guidelines warning residents to avoid putting mobile phones up to their heads. “Keep your phone away from your body,” the state health department writes. “Although the science is still evolving, some laboratory experiments and human health studies have suggested the possibility” that typical long-term cell phone use could be linked to “brain cancer and tumors of the acoustic nerve,” “lower sperm counts,” and “effects on learning and memory.” Mobile phones emit radiation, which is measured in radio-frequency (RF) energy. In the manual that comes pre-installed on your iPhone, Apple explicitly tells you to use a hands-free option like speakerphone or headphones while talking in order to “reduce exposure to RF energy.” The manual also notes that cell phones are currently tested for radiation assuming the devices would be kept at least 5 mm (0.2 in) away from the body while being carried.

Lesson Plan: How to Spot Fake News The problem of fake news came to a dizzying head in 2016 when a man fired a shot in a family pizzeria as he “self-investigated” a false report of a child abuse ring led by top democrats. A BuzzFeed report confirmed that fake news stories, such as the one that claimed Hillary Clinton sold arms to ISIS, were actually viewed more times than articles from established and legitimate news sources. Did fake news have an impact on the election? 5 ways to teach kids about Fake News Following up from the honor of being selected in Huffington Posts Top 12 Global Education Blogs of 2014/2015 I have been chosen again in this amazing group and for 2016/2017 will be contributing to Huffington Post’s Education blog once a month. This month we look to answer the following highly controversial question “How to we teach young people the rigorous critical thinking and research skills to distinguish news from propaganda? How do we ensure the next generation is one which communicates civically, values honesty, and recognizes reality?” – here is my response: Written together with Marialice Curran (@mbfxc), Founder and CEO of the DigCit Institute. Read more about the amazing work Marialice does around the world at www.mbfxc.com

Fake News Is Here: Help Students Detect It We highly recommend that teachers explore the New York Times Learning Network article (1/19/17) sharing many lesson ideas and resources (including this post): Evaluating Sources in a ‘Post-Truth’ World: Ideas for Teaching and Learning About Fake News. By Frank W. Baker “Dewey Defeats Truman” read the large-type headline on the front page of The Chicago Daily Tribune for the issue published the night of the 1948 presidential election. The headline was wrong: Harry Truman HAD won. The paper went to press before the final votes were counted. Google, democracy and the truth about internet search Here’s what you don’t want to do late on a Sunday night. You do not want to type seven letters into Google. That’s all I did. I typed: “a-r-e”. And then “j-e-w-s”.

Is technology smart enough to fix the fake news frenzy? The debate about “fake news” and the “post-truth” society we now supposedly inhabit has become the epistemological version of a feeding frenzy: so much heat, so little light. Two things about it are particularly infuriating. The first is the implicit assumption that “truth” is somehow a straightforward thing and our problem is that we just can’t be bothered any more to find it. We're climate researchers and our work was turned into fake news Science is slow. It rests on painstaking research with accumulating evidence. This makes for an inherently uneasy relationship with the modern media age, especially once issues are politicised.

Ultimate Guide to Fake News: 27 of the Worst Fake News Sources If you spent any manner of time on the Internet in 2016, you probably noticed the term “fake news” being thrown around. It seems that the events of 2016 helped fuel an epidemic of the writing, posting, and sharing of articles posing as factual news releases. In reality, they were nothing more than clickbait attempts at generating revenue through the spreading of nearly unbelievable stories that captivated the emotions of many. It’s never fun when you read something awe-inspiring online and then find out later that you were tricked into believing something entirely untrue. It’s also embarrassing when you share the latest "breaking news" – showing your friends that you're one of the first people in the know – and then that news ends up being fake.

The (almost) complete history of 'fake news' Media playback is unsupported on your device In record time, the phrase morphed from a description of a social media phenomenon into a journalistic cliche and an angry political slur. How did the term "fake news" evolve - and what's next in the world of disinformation?