Fake News Or Real? How To Self-Check The News And Get The Facts : All Tech Considered 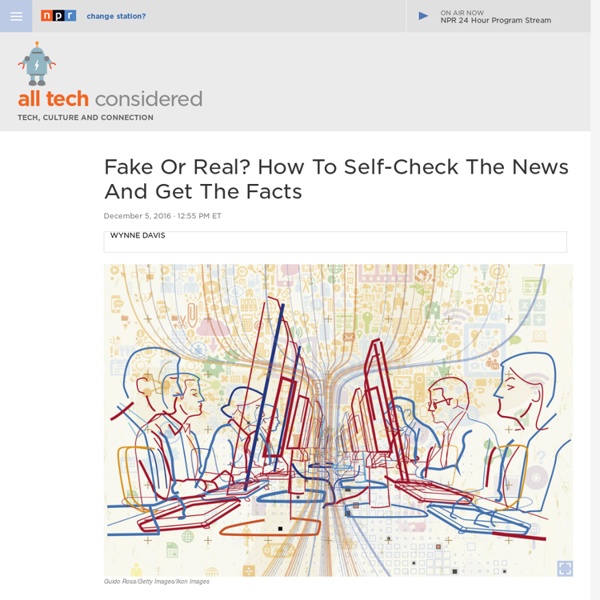 Guido Rosa/Getty Images/Ikon Images Fake news stories can have real-life consequences. On Sunday, police said a man with a rifle who claimed to be "self-investigating" a baseless online conspiracy theory entered a Washington, D.C., pizzeria and fired the weapon inside the restaurant. So, yes, fake news is a big problem. These stories have gotten a lot of attention, with headlines claiming Pope Francis endorsed Donald Trump in November's election and sites like American News sharing misleading stories or taking quotes out of context. And when sites like DC Gazette share stories about people who allegedly investigated the Clinton family being found dead, the stories go viral and some people believe them. Stopping the proliferation of fake news isn't just the responsibility of the platforms used to spread it. The idea is that people should have a fundamental sense of media literacy. Both Mantzarlis and Zimdars agreed there are a few best practices people can use when reading articles online.

How to Spot Fake News Fake news is nothing new. But bogus stories can reach more people more quickly via social media than what good old-fashioned viral emails could accomplish in years past. Concern about the phenomenon led Facebook and Google to announce that they’ll crack down on fake news sites, restricting their ability to garner ad revenue. Perhaps that could dissipate the amount of malarkey online, though news consumers themselves are the best defense against the spread of misinformation. Not all of the misinformation being passed along online is complete fiction, though some of it is. Snopes.com has been exposing false viral claims since the mid 1990s, whether that’s fabricated messages, distortions containing bits of truth and everything in between.

Save The Pacific Northwest Tree Octopus Help Save The ENDANGERED From EXTINCTION! The Pacific Northwest Tree Octopus Rare photo of the elusive tree octopus Fake news. It's complicated. - First Draft News This article is available also in Deutsch, Español, Français and العربية By now we’ve all agreed the term “fake news” is unhelpful, but without an alternative, we’re left awkwardly using air quotes whenever we utter the phrase. The reason we’re struggling with a replacement is because this is about more than news, it’s about the entire information ecosystem.

Don’t Believe Everything You Hear or Read Mars Peopled by One Vast Thinking Vegetable! Salt Lake Tribune, October 13, 1912 In the most recent “Right to the Source” column in NSTA’s magazine The Science Teacher, Michael Apfeldorf discusses reactions in the early 20th century to reports of life on Mars. He explains that as early as 1894, scientists noted that conditions on Mars would not support life, but wild theories persisted in popular media. That reminded us of the Library’s many April Fools’ Day posts featuring primary sources that should not be taken at face value. After Comet Ping Pong and Pizzagate, teachers tackle fake news History teacher Chris Dier was in the middle of a lesson last week at Chalmette High School in Chalmette, La., when a student made a befuddling inquiry: “He raised his hand and asked if I knew about Hillary Clinton using pizza places to traffic people.” About a thousand miles away at Wilson High School in Northwest Washington, distressed students in teacher Eden McCauslin’s history and government classes asked why a North Carolina man armed with an assault rifle had appeared at their local pizza shop, Comet Ping Pong, telling police that he wanted to free child sex slaves he believed to be harbored there, a false narrative conspiracy theorists have pushed on the Internet. [Pizzagate: From rumor, to hashtag, to gunfire in D.C.] Hoaxes, fake news and conspiracy theories have abounded on the Web, spreading with increasing speed and intensity during the recent presidential election cycle. As the Comet Ping Pong incident displayed, such false accounts can inspire very real consequences. local

The Book Chook: Help Kids Detect Fake News by Susan Stephenson, www.thebookchook.com “Fake news” is a term that has exploded in popularity recently. It is often used to describe articles and memes that have been deliberately fabricated to manipulate opinion or misinform. Who Stands Between Fake News and Students? Educators Every week, Dave Stuart hands out a current news article to his world history students so they can digest and evaluate the credibility of the information and its sources. One day this fall, Stuart, now in his tenth year at Cedar Springs High School in Michigan, distributed a couple of stories about the 2016 presidential candidates. In the middle of a uniquely controversial and divisive campaign, it was perhaps inevitable that during the discussion some students would dredge up information that didn’t appear in the articles their teacher had provided.

How To Spot Fake News Critical thinking is a key skill in media and information literacy, and the mission of libraries is to educate and advocate its importance. Discussions about fake news has led to a new focus on media literacy more broadly, and the role of libraries and other education institutions in providing this. When Oxford Dictionaries announced post-truth was Word of the Year 2016, we as librarians realise action is needed to educate and advocate for critical thinking – a crucial skill when navigating the information society. IFLA has made this infographic with eight simple steps (based on FactCheck.org’s 2016 article How to Spot Fake News) to discover the verifiability of a given news-piece in front of you. Download, print, translate, and share – at home, at your library, in your local community, and on social media networks.

Boilerplate’s Origins Paul came up with the concept for Boilerplate years before the robot appeared in our books. Initially, he thought about using it in a graphic novel. That evolved into the idea of telling the robot’s story in a more “realistic” way, illustrated by doctored photographs and set against world history as a backdrop. In the year 2000, which for so long sounded like the future but is now in the past, Paul decided to post some robot stories on our website. Not, contrary to some accounts, as a book pitch—he did it just for fun. He built a model robot, photographed it, digitally inserted it into vintage photos, and posted short stories on our old website.