Developer.com: Your Home for Java and Open Source Development Knowledge 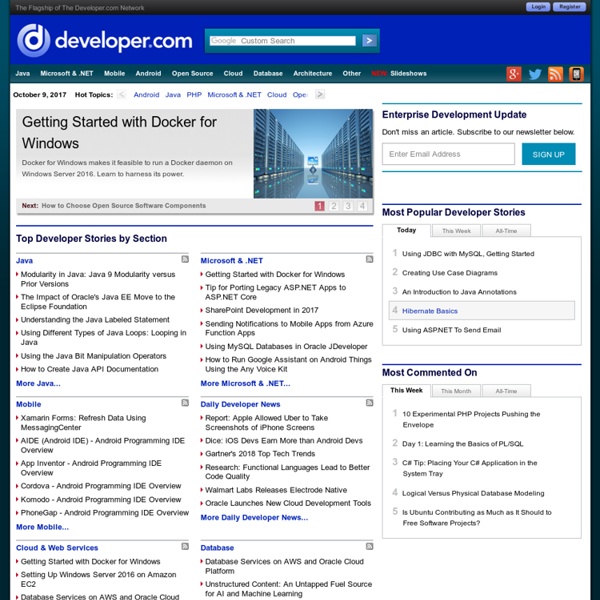 Panel maker cartel hit with hefty price fixing fines - Samsung and others feel Korean authorities wrath Some of the biggest players in the panel business have been found guilty of price fixing, with fines being handed to Samsung, LG Display and others by South Korean authorities. The Korean Fair Trade Commission has landed the firms, which also include AU Optronics and Chimei Innolux, with fines totalling $175 million. Though this figure is likely to come down once factors such as cooperation in the investigation into pricefixing are taken into account, it is significant ruling against the firms which account for around 80 percent of the world’s LCD panels. According to the FTC the panel makers had colluded on minimum prices, pricing policies, timing of price increases and a ban on cash rebates between 2001 and 2006. It was found that around 200 secret meetings took place over the course of six years to keep prices artificially high, and to confer on sales strategies. This was bad news for customers as the cartel carried out meetings that they were fully aware contravened Korean laws.

Martin Fowler uk proxy, unblock facebook, surf blocked Q&A with Fedora Project Leader Jared Smith on Fedora 16 and Beyond Today's the big day for the Fedora Project. After six months of hard work (give or take a few days for schedule slips) the Fedora 16 release is out the door. To get the "behind the scenes" look at this release, we touched base with Fedora Project Leader Jared Smith. Jared Smith If you're curious about all the nooks and crannies in the Fedora 16 release, check out the really detailed release notes on the Fedora Project docs site. But we also wanted to talk Fedora development, upcoming features, and challenges. Linux.com: Every Fedora release cycle its challenges — what in the F16 release cycle was the biggest hurdle? Jared Smith: There were a number of hurdles. Linux.com: What's new in Fedora 16 for end users? Jared Smith: For end users, the biggest visible difference is likely to be the GNOME 3.2 desktop. Linux.com: Fedora tends to debut features that wind up in Red Hat Enterprise Linux when they've matured. Linux.com: Where does Fedora stand with ARM development?

Intel opens new research centre in Israel - Making up for the lack of Fab After Intel stunned its chums in Israel by not taking up its offer to extend its fab operations in the Promised Land and look at Ireland instead, it was thought that the outfit had given up on the region. Now it seems that Chipzilla will open a new Israel research institute which will cooperate with several academic institutes towards research into computational intelligence. According to the Israeli press, the institute will begin operations in early 2012 and will be managed jointly by researchers from Intel and various academic institutes. It will look at topics that need computerised systems and the power of analysis and understanding resembling the capabilities of the human brain. Apparently Intel wants an infrastructure for what makes intelligent thinking. The cunning plan is to make computers process data from sensors and convert it into sensible information. Intel operates four R&D centres in Israel in Haifa, Petah Tikva, Jerusalem and Yakum.

Avatar.Pho.to - make an avatar online for free. Create animated avatars from your photos with cool photo effects. Chaîne de Bloomberg Bloomberg Television gives you an inside look at the luxury brands and trends attracting consumers everywhere from Wall Street to Silicon Valley to St. Tropez. Get the latest news about luxury real estate and travel destinations like New York, Miami, Los Angeles, San Francisco, London, Paris, Hong Kong, Shanghai, Berlin, Moscow, Singapore and more. Bloomberg TV gives you an inside look at how to travel there in style, with the newest innovations in aviation and private jets. Microsoft’s attack on Brazilian national sovereignty: Wikileaks, Microsoft, ODF and OpenXML | void life(void) A few days ago we were all surprised by a document leaked at CableGate, exchanged between the US embassy in Brazil and the American Government in 2007. According to this cable, Microsoft made serious accusations against the Brazilian government, and despite of the attempt to play the ’silly Microsoft’ at the meeting, they indirectly asked for an intervention of the American Government to halt the spread of ODF in Brazil, to win the Brazilian support for the approval of OpenXML in ISO, to halt the partnership between the Brazilian technical committee and other committees discussing the international standard at that time, to reduce the influence of Brazil in the international debate on OpenXML, and also to accuse the Brazilian Ministry of Foreign Affairs and the Brazilian Presidency’s Civil House of being anti-Americans. Worse than that, they also suggested that ODF is an anti-American standard! Finally, they try to insinuate that the ODF is an anti-American standard.