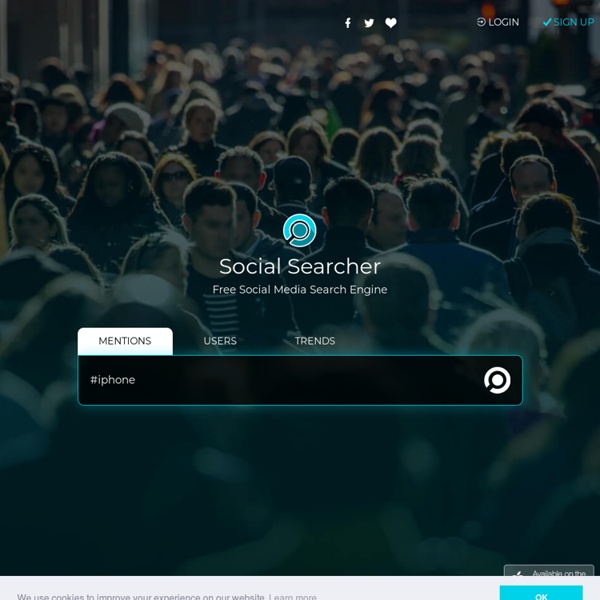 *The one word reporters should add to Twitter searches that you probably haven’t considered I’m a senior staff editor at The New York Times, reporting for our Express Team. Before that I was a staff editor on our social media desk for two years. Please forgive the gimmicky headline. I promise the word is coming, and if I gave it away now you wouldn’t be able to play along. 20 Websites To Free EBooks We understand that reading is the simplest way for human to derive and constructing meaning in order to gain a particular knowledge from a source. This tendency has been digitized when books evolve into digital media equivalent – E-Books. It would be nice if we’re able to download free e-book and take it with us.

Free Screenshot App Marketing Tool & Templates How do I record my iOS app? Please click here for instructions on how to record your iOS app. How do I record my Android app? Commentary: Facebook's Algorithm vs. Democracy Over the last several years, Facebook has been participating—unintentionally—in the erosion of democracy. The social network may feel like a modern town square, but thanks to its tangle of algorithms, it’s nothing like the public forums of the past. The company determines, according to its interests and those of its shareholders, what we see and learn on its social network. The result has been a loss of focus on critical national issues, an erosion of civil disagreement, and a threat to democracy itself.

10 Ways To Search Google For Information THAT 96% Of People DON'T Know About It’s been a while since Google became our best friend, helping us find whatever knowledge we crave for – from easy pancake recipes to the deepest philosophies and scientific theories about life. It seems that Google indeed has the answer for everything nowadays. But how many times have you managed to find that one page you were looking for in an instant?

Advanced Twitter Search Commands By Tracy Z. Maleeff Most people—and not only information professionals—are familiar with Twitter. The social media platform, originally an outlet for individual expression, is becoming a breaking news and information-sharing platform. However, information professionals underutilize and undervalue Twitter as a research tool, although they may use it to follow what’s happening in real time at library conferences. Twitter offers users a medium through which to send messages of no greater than 140 characters—at least as of now. Top 6 Underground Search Engines You Never Knew About Advertisement I love Google, Bing and Yahoo just as much as the next Internet user, but sometimes you really want to dig down into a particular subject. In order to do that, you really need access to those underground search engines that may not be quite as well known, but they dig much more deeply into specialized areas of the Internet than the general search engines are capable of. In many cases, these search engines are tapped into what is currently termed the “invisible web,” which is the information available on the Internet that standard search engines don’t have access to, because they are buried behind query forms or directory requests. The following 6 underground search engines that I chose are not porn sites, illegal piracy sites or anything else that could get you in trouble with the law, or with your significant other.

Say goodbye to Google: 14 alternative search engines Well it’s been a big week for search, I think we can all agree. If you’re a regular Google user (65% of you globally) then you’ll have noticed some changes, both good and bad. I won’t debate the merits of these improvements, we’ve done that already here: Google kills Right Hand Side Ads and here: Google launches Accelerated Mobile Pages, but there’s a definite feeling of vexation that appears to be coming to a head. Deep breath… As the paid search space increases in ‘top-heaviness’, as organic results get pushed further off the first SERP, as the Knowledge Graph scrapes more and more publisher content and continues to make it pointless to click through to a website, and as our longstanding feelings of unfairness over Google’s monopoly and tax balance become more acute, now more than ever we feel there should be another, viable search engine alternative. There was a point not that long ago when you could easily divide people between those that used Google, Yahoo, Ask Jeeves and AltaVista.

Commentary: It’s Facebook’s algorithm vs. democracy, and so far the algorithm is winning — NOVA Next Over the last several years, Facebook has been participating—unintentionally—in the erosion of democracy. The social network may feel like a modern town square, but thanks to its tangle of algorithms, it’s nothing like the public forums of the past. The company determines, according to its interests and those of its shareholders, what we see and learn on its social network. The result has been a loss of focus on critical national issues, an erosion of civil disagreement, and a threat to democracy itself. Facebook is just one part—though a large part—of the Big Data economy, one built on math-powered applications that are based on choices made by fallible human beings. Many of the algorithms built for the Big Data economy contain mistakes that can undermine solutions to the problems they hope to solve.

How to Find Anything Online: Become an Internet Research Expert Einstein once said, “The secret to creativity is knowing how to hide your sources.” The same could be said of intelligence. What they don’t tell you is that the “smart” people of the world are, in most cases, just better at researching and learning things than everyone else. But researching is a learned skill, not something you’re born with.