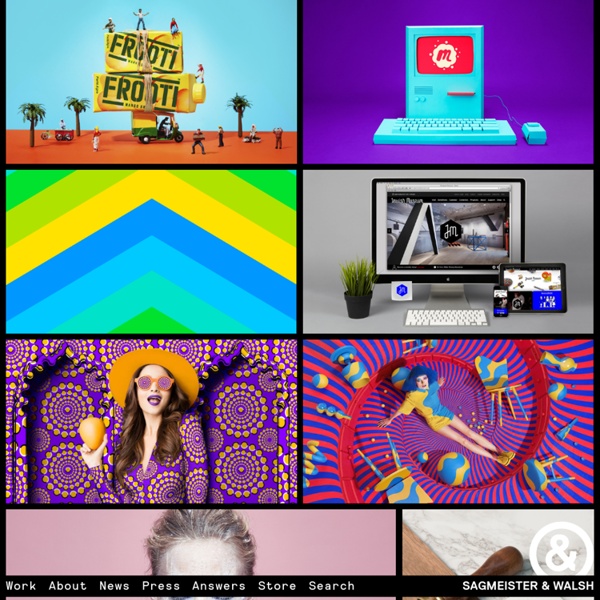 sagmeisterwalsh We created a small steam room in the storefront of Deitch Projects on Grand Street in New York's Soho district that kept the windows permanently fogged up. We invited an entire array of New York designers to come and write any of our maxims (such as: assuming is stifling or worrying solves nothing) into the steamed up windows. Everybody (including such icons as Milton Glaser and Massimo Vigneli) agreed to take part.New York designers who participated: Richard The, Joe Shouldice, Anna Wehrli, Milton Glaser, Massimo Vignelli, Bob Gill, Steven Guarnaccia, Roy Rub, Seth Labenz, Nicholas Blechman, Keith Godard, Jan Wilker, B. Disciplines: Environmental

About - Artillery design motion graphics studio Artillery is an award winning motion graphics & film studio. We specialise in pushing the creative boundaries across many disciplines from branding, design and direction, to animation and motion graphics. Our strengths lie within a process of working with our quality in-house talents and a core of external specialists which means our clients benefit from getting top end skills and results for each and every job. We integrate very carefully with you and your brief, giving you great ideas or nurturing and growing the ones you already have. Clients;

Design Studio Look Addict Identity Wake Up in Every Cup Illustration 50 Selected Logos Deyan Sudjic on the Ground Zero memorial When Maya Lin won the competition to design America's national memorial to its Vietnam war dead 20 years ago, nobody could have foreseen that this painfully young architecture student from Yale was, for better or worse, going to usher us all into a whole new era of monument-making. Even now with New York struggling to decide how best to honour the memory of the victims of the World Trade Centre attacks, she is proving to be a decisive voice. The black granite walls, free of eagles or insignia, that she proposed to cut into the grass of Washington's Mall were a decisive break with the way things used to be done.

25 websites that use minimalism beautifully 'Less is more' is a principle that today's online designers are increasingly coming to appreciate. Minimalism benefits websites in the shape of faster loading times and better compatibility between screen sizes. What's more, a simple UI design is attuned to mobile browsing, without harming the desktop experience. The minimalist philosophy centres on the idea that you must design around the content.

stills — Electric Art Electric Art is a Sydney based, globally recognised creative production specialist leading the way in Creative Retouching & 3D, Motion, Interactive & Augmented Reality. Founded in 1993, over the years we've worked with some of the biggest brands, ad agencies & photographers around the world. With today’s proliferation of new image mediums & the shift to more web-based work & animation, we now find ourselves managing whole projects. We output assets spanning traditional print, web, animation & interactive. In short, we love to take on challenges & occupy brand new spaces. Váscolo - WORKS New! CTC Network Logo IDs Motionlab All Work Skip to main content All Work Ladies & Gentlemen Compositing V-ray Render Layers in Photoshop In this tutorial Ahmed Fathi takes a look at how to composite together V-ray render layers using blending-modes and masks in Photoshop. Once completed, this process allows you to change or tweak any aspect of your image in seconds without having to re-render a thing! Ahmed also covers a few extra post production techniques such as Chromatic Aberration and Depth Of Field, as well as how to emulate a Cross-processed look. Republished Tutorial