Arrival - Acoustic Signatures: The Sound Design. 'Game of Thrones' Sound Editor - Tim Kimmel Interview. What Game of Thrones pulls off visually each week rivals anything you might see at a movie theater, and in tonight's episode, "The Dance of Dragons," we got some fire-breathing action. 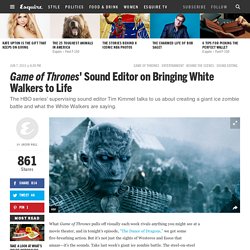 But it's not just the sights of Westeros and Essos that amaze—it's the sounds. Take last week's giant ice zombie battle. The steel-on-steel clashing of a swordfight. The scream of an undead horde. THX Soundtrack! Ann Kroeber Special: A Pioneering Sound Woman. Editor’s note: This article is written by Karol Urban, CAS. 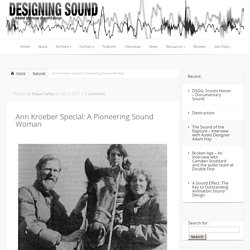 Designing Sound did little to contribute to this interview beyond bringing two highly skilled women together to talk about working in sound. We thank Karol for bringing her expertise and perspective to this article. Karol Urban: What do you think it is about you or your life experiences that has driven you to become a sound designer and recordist?

Ann Kroeber: I started off in sound very much by accident. I had a dad who was very strict and Germanic and he wouldn’t even allow me to turn on the stereo. So, it was when I was working at the United Nations. I really wanted to work at the UN. Anyway, at the end of my assignment, I was trying to find another way to stay there in another capacity perhaps. He said, “Yeah, you could go out with some crews and do some recording.” I didn’t even try the tape recorder until I went out. I got so excited that I forgot about the rules and I just used my instincts and my ear. Oh no. Yes. Tribeca: Here's Why the Coen Brothers' Films Always Sound. By Shipra Harbola Gupta | Indiewire April 24, 2015 at 9:07PM Joel and Ethan Coen's go-to composer Carter Burwell and sound recordist Skip Lievsay sat down with Glenn Kiser, the Director of The Dolby Institute, to discuss their respective roles in the brothers' cinematic universe. 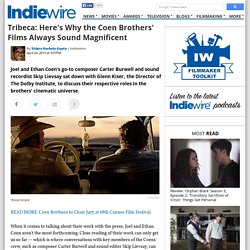 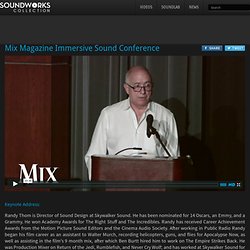 He has been nominated for 14 Oscars, an Emmy, and a Grammy. He won Academy Awards for The Right Stuff and The Incredibles. Master Class by Resul Pookutty on Sound Design. Tonebenders – episode twenty one – ann kroeber. Tonebenders / Episode Twenty One Podcast: Play in new window | Download. 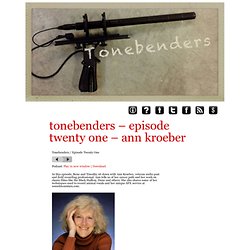 An Interview with John Roesch. Designing Sound: Would you like to introduce yourself a little bit? 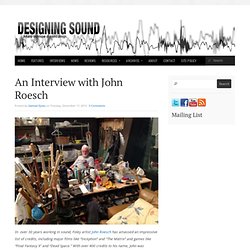 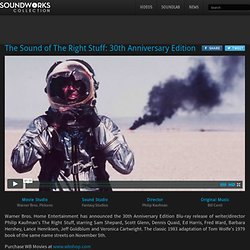 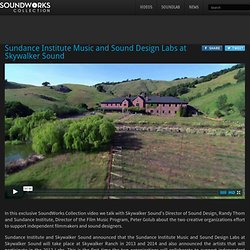 Sundance Institute and Skywalker Sound announced that the Sundance Institute Music and Sound Design Labs at Skywalker Sound will take place at Skywalker Ranch in 2013 and 2014 and also announced the artists that will participate in the 2013 Labs. This is the first time the two organizations will collaborate to support independent filmmakers and film composers and marks a significant expansion of the Institute's existing Composers Labs to include sound design. The Institute has hosted its Composers Labs at Sundance Resort for fiction feature films since 1999 and documentaries since 2005, allowing composers and independent filmmakers to collaboratively explore the process of writing music for film. HISS and a ROAR 3rd birthday: interview with Tim Prebble. From today Tim launches a sale for HISS and a ROAR, offering a massive 50% discount for first week and 33% for second week. 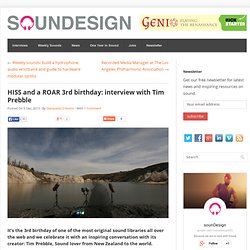 Use the discount code: MEOW. Good luck! Hi Tim, thanks for taking the time to talk to me. It’s the 2nd time we meet here: you were our first interview in english. It’s the birthday of HISS and a ROAR, I guess you have something to say about this amazing project. How Can Composers and Sound Designers Better Collaborate in Film? Sundance Institute and Skywalker Sound Have an Answer. Skywalker Sound Through a new partnership, Sundance Institute and Skywalker Sound want to change the noisy conversation about music and sound design in film. 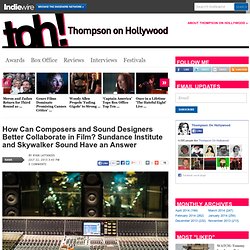 Each year through their longstanding Composers Labs, Sundance invites young, gifted musicians who want to work in film composition to an intensive program facilitated by industry-established advisors (read the list of this year's composers and filmmakers here). So what's different this year? Enter Skywalker Sound. Back in June, Sundance Institute relocated their longstanding, now newly redefined Composers Labs to Skywalker Ranch, George Lucas' secluded site of filmmaking genius in Marin County, CA. "Skywalker Sound has been enormously generous with the independent film community," said Sundance Institute executive director Keri Putnam in a phone interview, where she spoke to me from the open splendor of the Northern California ranch. USA TODAY. An introduction to Alvin Lucier – and his impact on the sound of Se7en. CNET News - From phasers to warp, the sound design of 'Star Trek' SoundWorks Collection.

When we talk about the blurry lines that exist between sound design and music, it’s important to remember that we don’t work in a vacuum. Media is collaborative. The more effectively we work with our counterparts, the greater a project’s potential becomes. So, I asked Randy Thom to discuss the ins and outs building a working relationship the music department.

DS: I know you’ve had the opportunity to work with certain composers on multiple projects, but I think, if you don’t mind, we’ll discuss that a little later in the conversation. I’d like to start out talking a bit about those projects, in general, where there’s been returning staff. RT: Well, I think it helps if the sound designer and the composer make a push, or lobby on each project, to coordinate their efforts as much as possible. DS: You used the word “push.” Sundance 2013: The Sound of Your Story. SoundWorks Collection. Ang Lee's "Life of Pi" was a famously difficult movie to pull off, a philosophical and spiritual journey featuring a young protagonist (don't work with kids) stranded on the open sea (don't work on water) with his only companion, a Bengal tiger named Richard Parker (don't work with animals).

Throw in a beloved bestselling book whose devoted fans would be comparing the adaptation to the novel, extensive special effects that included a menagerie of largely CG animals, and Lee's decision to shoot in 3D for the first time, and only the truest of true believers would have dared suggest that the movie would end up an international hit with grosses approaching $450 million, and a critical favorite with 11 Oscar nominations, including Best Picture and both sound categories. What was your basic approach to the sound mix on "Life of Pi?

" Doug Hemphill: It was all based on the tacit understanding that the sound reflected [the character] Pi's inner life and the arc of the story. Hemphill: Very. Exclusive Interview: Bryan Jerden on Trailer Sound Design. For quite a few years, sound design for trailers has become increasingly creative and interesting. For blockbusters in Hollywood, an imaginative trailer campaign seems to be more and more important and sound is quite often utilized in inspired and inspiring ways. One of the top sound designers of Hollywood trailers is Bryan Jerden who has worked on prominent movie trailers such as Prometheus, The Dark Knight Rises, Harry Potter, Rise of the Planet of the Apes and Inception, among many others. Bryan has also done a large amount of game trailers including titles like Hitman, Syndicate and Dragons Dogma. In this interview, he talks about his background, creative methods, the interplay between music and sound and why silence is such an important tool for sound designers.

Designing Sound: How did you get involved in doing sound design for trailers? Bryan Jerden: My work in the trailer world came as result from working for Tim Gedemer who is now the owner of Source Sound Inc. 8 Tips for Making Your Film Sound Great from the Industry's Top Sound Designers and Execs. Glenn Kiser (Former Vice President and General Manager of Skywalker Sound); Ben Burtt (Lincoln, Star Wars, Wall•E, Indiana Jones, Star Trek); Randy Thom (Flight, How to Train Your Dragon, Cast Away, Apocalypse Now); Erik Aadahl (Argo, Tree of Life, Transformers: Dark of the Moon); Will Files (Cloverfield, Star Trek Intro Darkness, Take Shelter); Phil Benson - Executive in Charge of Skywalker Sound Last week at the Sundance Film Festival, Dolby announced the launch of its “Dolby Institute” at a panel entitled “The Sound of Your Story” on Jan. 20.

Details of the Institute were few at the panel, so Indiewire caught up with Dolby after the Festival for more. Slated for a spring 2013 launch, the Institute will support artists “at film festivals, in universities and conservatories” first with sound, and eventually with other aspects of filmmaking. The Institute plans to branch the effort out into electronic and emerging platforms. 1. 2. 3. From Raindrops to Robots to Old Ticking Clocks - movieScope Magazine. Technical Building, Skywalker Sound From Peter Pan to War Horse and Mission: Impossible – Ghost Protocol to Lincoln, Gary Rydstrom, sound designer and re-recording mixer at Skywalker Sound, has worked on a plethora of modern classics. Here he talks about his long-term collaboration with Steven Spielberg, and how inspiration can come from the most unlikely of places.

If at any point in the past 25 years you have become fascinated with films and filmmaking the chances are that, somewhere along the way, you’ve paid attention to the work of Gary Rydstrom. Having worked on films as diverse as Terminator 2: Judgement Day (1991)¾for which he received one of his two Academy Awards for Best Sound, the other being Saving Private Ryan (1998)¾Jurassic Park (1993), Titanic (1997) and Punch Drunk Love (2002), Rydstrom has a vast amount of experience in creating memorable soundscapes across all genres.

Gary Rydstrom He admits, however, that it wasn’t all hard work.