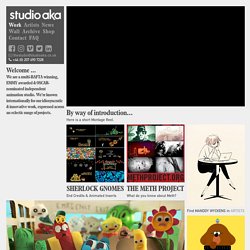 We are a multi-BAFTA winning, EMMY awarded & OSCAR-nominated independent animation studio. We're known internationally for our idiosyncratic & innovative work, expressed across an eclectic range of projects. <div class='colourbox warning' style='z-index:9999999999;'>For a better experience on our site and to view movies, enable JavaScript in your browser</div><br /> This video file cannot be played.

By way of introduction... Here is a short Montage Reel. End Credits & Animated Inserts The Amazing World Of Gumball: THE CRINGE. “This is it; the beginning of our repressed memories. Find MANDDY WYCKENS in ARTISTS ALTErED CArBON... 'I'm in pieces, bits and pieces...' ... & the WIRED Badge. Time After Time... Our Award Winning film for online retail store OTTO... Find MARCUS ARMITAGE in ARTISTS An EMMY for DUGGEE! Arrriba! No, there's no limits in this Hyundai campaign. Animation Studio & Video Production in London. Vallée Duhamel – High class lo-fi. Work - Mach. What keeps us busy. 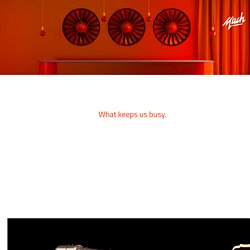 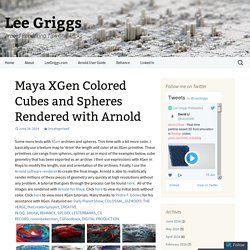 This time with a bit more color. I basically use a texture map to ‘drive’ the length and color of an XGen primitive. These primitives can range from spheres, splines or as in most of the examples below, cube geometry that has been exported as an archive. I then use expressions with XGen in Maya to modify the length, size and orientation of the archives. Finally, I use the Arnold software renderer to create the final image. Its nice to see that my work has inspired other artists to also have a go. Found / Work. Showreel : Bolder Creative. Kobe HTM · Shane Griffin · Sunday Afternoon. FIELD x Muse. TRONCO. Tendril. Important Looking Pirates. Visual Assembly — VA. Concepts for Splinter Cell user interfaces that work in combination with Microsofts Kinect. 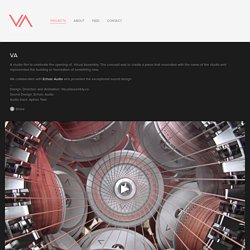 Concept 1Tabs The concept is based on a tabbed carousel design that can be manipulated in both 2D and 3D space.To navigate, tabs can rotate around the central column with a swipingmotion.All the tabs can animate in size, colour, depth and transparency. As shown, the tabs are currently displaying a map of Africa. Any relevant tab can then be pushed, pulled, swiped or pressed to reveal sub groups displaying more relevant information. These sub groups can then fan out creating multiple cylindrical levels of the carousel. Tabs can also animate to sound input.For example a phone recording can be fed into the device and the tabs can react in the same way a graphic equaliser would.

Concept 2Columns This concept is based on columns that can be navigated vertically. You Scroll up and down activating digital platforms pertaining to information that is needed. Machineast. PORTFOLIO – Ink and Giants. The Six & Five Studio. Váscolo - WORKS. New! 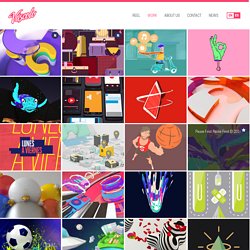 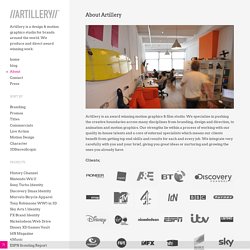 We specialise in pushing the creative boundaries across many disciplines from branding, design and direction, to animation and motion graphics. Our strengths lie within a process of working with our quality in-house talents and a core of external specialists which means our clients benefit from getting top end skills and results for each and every job.

We integrate very carefully with you and your brief, giving you great ideas or nurturing and growing the ones you already have. Clients; Since Artillery’s inception in 2003, the studio’s reputation as a force to be reckoned with continues to grow, winning work and forging new relationships in the Broadcast, Corporate and Advertising industries. Andrew Williams, Director of Creative Advertising, Nickelodeon. – “Once again, Artillery responded to the briefs, with passion, energy and some great ideas – everything you want from a creative agency”. Awards; The Thing TV - Production Company in Buenos Aires, Argentina. Restless. HippieHouse Studio. LUMBRE. 2013. 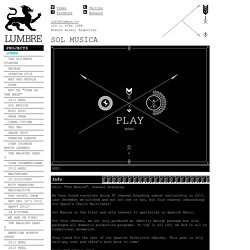 "SOL Música". Channel branding. We have found ourselves doing TV channel branding almost exclusively in 2013. Last December we pitched and won not one or two, but four channel rebrandings for Spain’s Chello Multicanal! Sol Música is the first and only channel to specialize in Spanish Music. For this channel, we not only produced an identity design package but also packaged all domestic production programs.