The Golden Ratio: Design's Biggest Myth. In the world of art, architecture, and design, the golden ratio has earned a tremendous reputation. 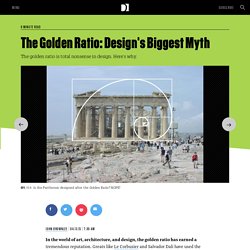 Greats like Le Corbusier and Salvador Dalí have used the number in their work. Playsuits, Day Dresses and 1950s. Alfred Shaheen - Shaheen History. Ka ‘Elele - The Messenger - Journal of the Bishop Museum. Completing a stencil in the Pua Lani Pareau design for a Shaheen silk screen, 1957. 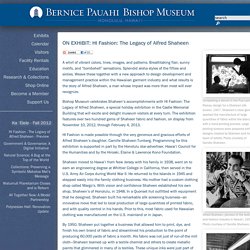 Shaheen’s clear genius sparked the manufacture of large quantities of fabric within the Islands with a hand-printing process. Large printing screens were prepared with designs created by Shaheen and his team of artists. Alfred Shaheen - Surf 'n Sand Handprints. 1940s - Vintage Sewing Patterns. 1950s - Vintage Sewing Patterns. Claire McCardell. After I got back from L.A., I meant to spend some time testing methods for constructing this Claire McCardell dress, from an early 50s pattern by Spadea: I intended to sew it up back in August for my sister, who is the Artistic Director of the Martha Graham Dance Company, to wear to an event at the “Dance & Fashion” exhibit, (now running through January 3rd, 2015, at the Museum at FIT in New York). 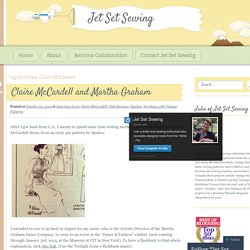 To have a flashback to that whole explanation, click this link. (Cue the Twilight Zone-y flashback music) I thought Claire McCardell was a good choice for this event, because McCardell and Martha Graham are often mentioned together in books and articles as being similar in their pared-down artistic style. They did meet on at least one occasion, when they both received the Women’s Press Club award in 1950, a very big deal back then.

So, I chose a mid-weight black New Zealand merino knit that I got this spring from The Fabric Store in L.A. Shopping for Sewing Supplies at the Hardware Store. Last month I messaged the amazing Heather of House. of A La Mode to see if she wanted to shop for sewing supplies with me. 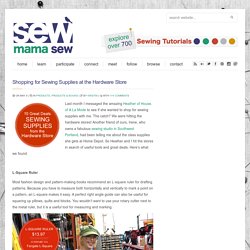 The catch? We were hitting the hardware stores! Another friend of ours, Irene, who owns a fabulous sewing studio in Southwest Portland, had been telling me about the class supplies she gets at Home Depot. So Heather and I hit the stores in search of useful tools and great deals. Here’s what we found. L-Square Ruler Most fashion design and pattern-making books recommend an L-square ruler for drafting patterns. Claire McCardell. Saved from the ‘70s. After reading the re-issue of Claire McCardell’s book What Shall I Wear, I determined that I needed to make myself a version of a “pop-over” dress. 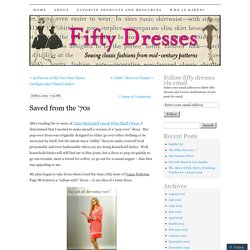 Her pop-over dress was originally designed to either go over other clothing or be worn just by itself, but the intent was a “utility” dress to make yourself look presentable and even fashionable when you are doing household duties. Well, household duties will still find me in blue jeans, but a dress to pop on quickly to go run errands, meet a friend for coffee, or go out for a casual supper – that idea was appealing to me.

My plan began to take form when I read the June/July issue of Vogue Patterns. Page 86 features a “caftan-style” dress – or my idea of a tunic dress. Fuzzylizzie's Fashion & Travel: Vintage Style. Comparing Details as an Aid to Dating Vintage Clothing. Collecting sportswear has a particular challenge in that it does not always follow the fashion of the era. 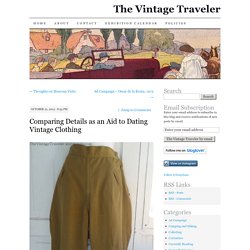 This is especially true in something like riding breeches that were made for a particular purpose, and thus had to be functional. Sometimes the collector has to look beyond fashion to come up with a reasonable date for an object. I have three pairs of riding breeches and jodhpurs. In order to put them in their correct time period, I have to rely on the details and construction techniques. I’m not an expert in the history of riding pants, but using what I do know about fabrics, construction, and fashion, I was able to put a date on each pair. The oldest pair I have is the pair above. These pants close using buttons on both sides of the hips. The insides of the knees is reinforced with an extra layer of twill fabric. To keep the pants legs from riding up, there is lacing on the outside of each leg. 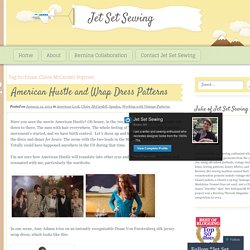 Oh honey, in the 70s, I was there. The knit dresses cut down to there. The men with hair everywhere. The whole feeling of “Vietnam’s over, the feminist movement’s started, and we have birth control. Let’s dress up and have a party!” I’m not sure how American Hustle will translate into other eras and cultures, but everything in it resonated with me, particularly the wardrobe. In one scene, Amy Adams tries on an instantly recognizable Diane Von Furstenberg silk jersey wrap dress, which looks like this: DVF’s wrap dress design is now celebrating it’s 40th anniversary. 1950s - Vintage Sewing Patterns.