LogMeIn - Remote Access and Desktop Control Software for Your Computer 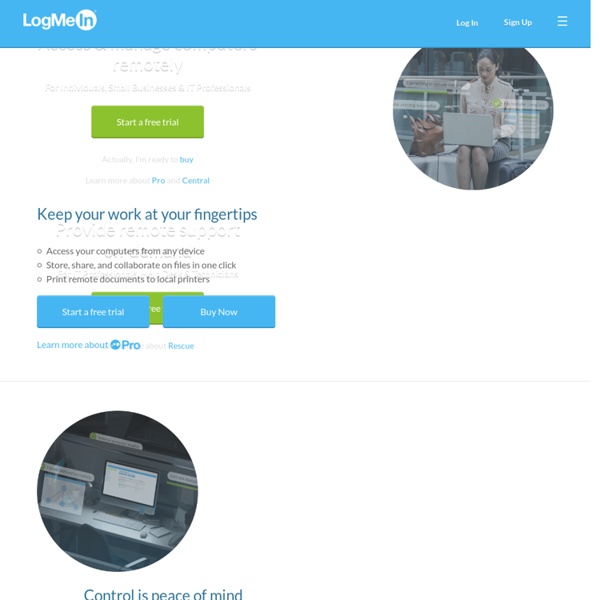 Scanning the Internet with Nmap (Defcon 16) Tutorial Scanning The Internet With Nmap (Defcon 16) Description: How would you like to scan millions of hosts on the Internet and catalog all the interesting insights? This is exactly what Fyodor, the author of Nmap or Network Mapper did last summer. Thankfully, he then went on to share his finding with the community at Defcon 16 in his talk titled "Nmap: Scanning the Internet". Interestingly, as Fyodor notes in his talk that scanning such a large set of IP addresses did help him in uncovering many bugs in Nmap and also forced him to make enhancements and add new features to make the scanner really fast. The slides for the presentation are available here and a high resolution video can be downloaded here.

Medical Speech Pathology To improve the strength of exhalatory muscles for breathing, improve voluntary cough, and movement of the hyolaryngeal complex. Patients with decreased exhalatory muscle strength, poor cough, or decreased movement of the hyolaryngeal complex. EMST and you 1. John the Ripper password cracker John the Ripper is free and Open Source software, distributed primarily in source code form. If you would rather use a commercial product tailored for your specific operating system, please consider John the Ripper Pro, which is distributed primarily in the form of "native" packages for the target operating systems and in general is meant to be easier to install and use while delivering optimal performance. This version integrates lots of contributed patches adding GPU support (OpenCL and CUDA), support for a hundred of additional hash and cipher types (including popular ones such as NTLM, raw MD5, etc., and even things such as encrypted OpenSSH private keys, ZIP and RAR archives, PDF files, etc.), as well as some optimizations and features. Unfortunately, its overall quality is lower than the official version's. Requires OpenSSL. There are unofficial binary builds (by John the Ripper user community members) for Windows, Linux, Solaris, and Mac OS X.

Complete Guide to Networking Windows 7 with XP and Vista Since there are three versions of Windows out in the field these days, chances are you need to share data between them. Today we show how to get each version to be share files and printers with one another. In a perfect world, getting your computers with different Microsoft operating systems to network would be as easy as clicking a button.

PsExec Introduction Utilities like Telnet and remote control programs like Symantec's PC Anywhere let you execute programs on remote systems, but they can be a pain to set up and require that you install client software on the remote systems that you wish to access. PsExec is a light-weight telnet-replacement that lets you execute processes on other systems, complete with full interactivity for console applications, without having to manually install client software. Swallow Stronger-Swallow Safer: Contributions by Dr. JoAnne Robbins and the Swallow Solutions Team Oromotor exercises have been used widely as a treatment modality in the practice of speech pathology for many decades.1 However only in recent years has oropharyngeal strengthening therapy been applied to swallowing rehabilitation.2-5 Age-related loss of skeletal muscle and strength, the condition known as sarcopenia, has been known for decades to affect striated limb musculature. More recently, work by JoAnne Robbins, PhD and others indicates that striated head and neck muscles also are affected by sarcopenia, where it manifests as changes in muscle fiber density, tension, strength, and contraction in facial, masticatory, and lingual musculature. These changes are primary contributors to dysphagia.

Privacy tools You are being watched. It has become a fact that private and state sponsored organizations are spying on us. privacytools.io is here to give you the knowledge and tools to defend yourself against global mass surveillance. Over the last 16 months, as I've debated this issue around the world, every single time somebody has said to me, "I don't really worry about invasions of privacy because I don't have anything to hide." I always say the same thing to them.

Kindle DX as E Ink computer monitor Warning Note that in some jurisdictions, it may actually be illegal to jailbreak your tablet (but not a phone!). These directions are current as of March 2012 and worked well for me. They may not work for you, and might even destroy your Kindle. At the very least, they definitely void your warranty. Proceed at your own risk (and joy).

Computer acting funny? It may be infected with a virus! One great thing about computers is that they often warn us when something is wrong. Sometimes they suddenly slow down to a crawl, other times they start to freeze up or even crash for what seems to be no reason at all. Most of the time though, there is a reason why our computers start to act funny. One of those reasons is due to malware and viruses. SwallowStrong Device - Patients with Swallowing Disorders The SwallowStrong device is now available! The SwallowStrong device comprises an oral mouthpiece connected to a notebook computer. The oral component of this device is a pliable mouthpiece that incorporates sensors to measure pressure at four distinct locations on the tongue.