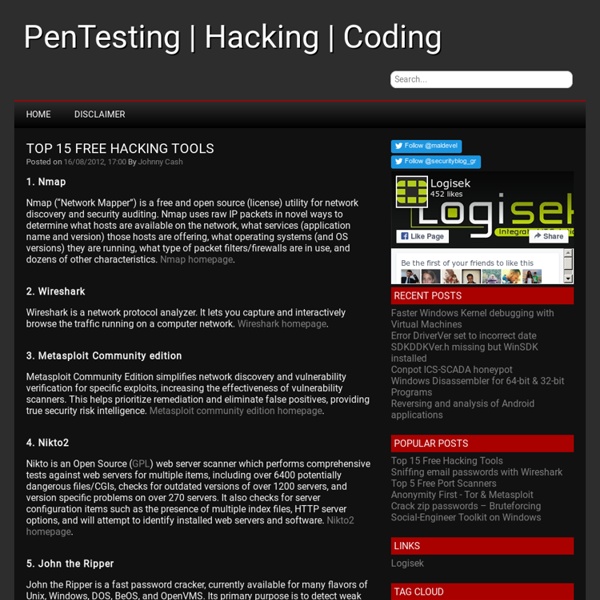 1. Nmap Nmap (“Network Mapper”) is a free and open source (license) utility for network discovery and security auditing. Nmap uses raw IP packets in novel ways to determine what hosts are available on the network, what services (application name and version) those hosts are offering, what operating systems (and OS versions) they are running, what type of packet filters/firewalls are in use, and dozens of other characteristics. Nmap homepage. 2. Wireshark is a network protocol analyzer. 3. Metasploit Community Edition simplifies network discovery and vulnerability verification for specific exploits, increasing the effectiveness of vulnerability scanners. 4. Nikto is an Open Source (GPL) web server scanner which performs comprehensive tests against web servers for multiple items, including over 6400 potentially dangerous files/CGIs, checks for outdated versions of over 1200 servers, and version specific problems on over 270 servers. 5. 6. ettercap 7. 8. 9. 10. w3af 11. hping 12. burpsuite 13.

How To Become A Hacker Copyright © 2001 Eric S. Raymond As editor of the Jargon File and author of a few other well-known documents of similar nature, I often get email requests from enthusiastic network newbies asking (in effect) "how can I learn to be a wizardly hacker?". Learn Ethical Hacking Online - HackingLoops There’s a seemingly endless number of free open-source tools for penetration testing, and most of them seem to gravitate around the Kali Linux distribution. But with so many free tools, it’s easy to miss out on some of the best ones. So today we’re going to take a closer look at Armitage, define what it is, and define how it works.

The glider: an Appropriate Hacker Emblem The Linux folks have their penguin and the BSDers their daemon. Perl's got a camel, FSF fans have their gnu and OSI's got an open-source logo. What we haven't had, historically, is an emblem that represents the entire hacker community of which all these groups are parts. This is a proposal that we adopt one — the glider pattern from the Game of Life. About half the hackers this idea was alpha-tested on instantaneously said "Wow! Cool!" Cheat Sheets Download All (.zip) Wall Posters (36" x 24") Interior Gateway Protocols Design Patterns In software engineering, a design pattern is a general repeatable solution to a commonly occurring problem in software design. A design pattern isn't a finished design that can be transformed directly into code. It is a description or template for how to solve a problem that can be used in many different situations. Uses of Design Patterns Design patterns can speed up the development process by providing tested, proven development paradigms.

64 Things Every Geek Should Know - laptoplogic.com The term ‘geek’, once used to label a circus freak, has morphed in meaning over the years. What was once an unusual profession transferred into a word indicating social awkwardness. As time has gone on, the word has yet again morphed to indicate a new type of individual: someone who is obsessive over one (or more) particular subjects, whether it be science, photography, electronics, computers, media, or any other field. 80+ Best Free Hacking Tutorials Learning to become hacker is not as easy as learning to become a software developer. I realized this when I started looking for learning resources for simple hacking people do. Even to start doing the simplest hack on own, a hacker requires to have in depth knowledge of multiple topics. Some people recommend minimum knowledge of few programming languages like C, Python, HTML with Unix operating system concepts and networking knowledge is required to start learning hacking techniques.