How to View Passwords Hidden Under Asterisks [Video] 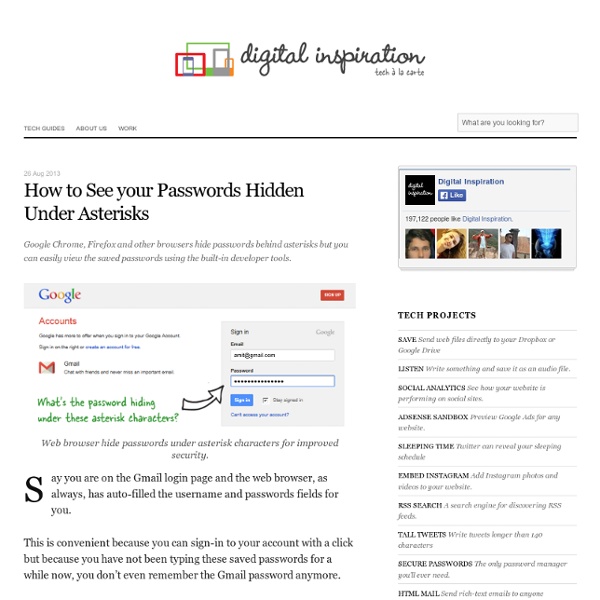 Google Chrome, Firefox and other browsers hide passwords behind asterisks but you can easily view the saved passwords using the built-in developer tools. Web browser hide passwords under asterisk characters for improved security. Say you are on the Gmail login page and the web browser, as always, has auto-filled the username and passwords fields for you. This is convenient because you can sign-in to your account with a click but because you have not been typing these saved passwords for a while now, you don’t even remember the Gmail password anymore. All web browsers, for security reasons, mask the password fields in login forms behind asterisk characters thus making it impossible for passersby to see your secret string. There’s however an easy workaround that will let you convert those asterisks into the actual password and you don’t need any external utilities or bookmarklets for this. Right-click the password field and then choose “Inspect Element.”

5 Terrifying Smartphone Hacks You Won't Believe Are Possible Sometimes we fail to appreciate the fact that today, right now, we're living in a sci-fi universe. The smartphone is a miracle of mathematics and engineering genius, converting a little over 4 ounces of inert matter into a Star Trek-level wondercomputer. But the downside of storing your entire world inside an ass-pocket-dwelling supercomputer is that there are always those who are itching to turn that technology against you in ways you'd never expect, like ... Bobbyjoyner added: 25 Killer Combos for Google's Site: Operator There’s an app for everything – the problem is that we’re so busy chasing the newest shiny toy that we rarely stop to learn to use simple tools well. As a technical SEO, one of the tools I seem to never stop finding new uses for is the site: operator. I recently devoted a few slides to it in my BlueGlassX presentation, but I realized that those 5 minutes were just a tiny slice of all of the uses I’ve found over the years.

Sabu bless America Video Anonymous “Fuck Sabu”.Sabu was arrested in June 2011 and identified as Hector Xavier Monsegur. Sabu helped FBI stop over 300 cyber attacks. Hector Xavier Monsegur, known as “Sabu”, helped the FBI send his friends to prison and stop some 300 cyber attacks over the past three years, according to court documents filed by prosecutors. Film Library Film Education - Follow us on: Twitter, Facebook RSS Skip to main content Home > Resources > Film Library Simple Steps to Hack a Smartphone What kind of information do you have on your business card? Company name? Check. Your name and title? Check.

19 Hidden Chrome Features That Will Make Your Life Easier Click To View Slideshow» Chrome has a buttload of hidden little tricks that you may not know about. Browsers have evolved far beyond their original mission of providing one-way windows into the world wide webosphere. Indeed, as more services migrate to the cloud, browsers only reinforce their new role as multi-function boxes of digital magic.