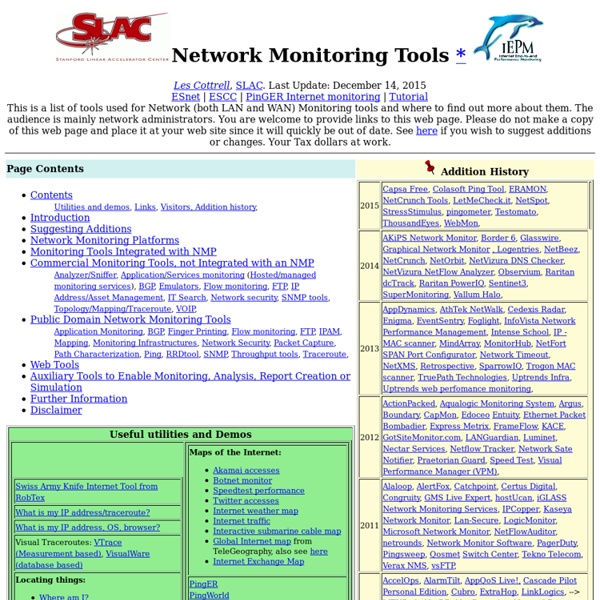 Les Cottrell, SLAC. Last Update: December 14, 2015 ESnet | ESCC | PinGER Internet monitoring | Tutorial This is a list of tools used for Network (both LAN and WAN) Monitoring tools and where to find out more about them. The audience is mainly network administrators. You are welcome to provide links to this web page. Please do not make a copy of this web page and place it at your web site since it will quickly be out of date. Introduction [Contents] We welcome corrections such as identifying broken links (especially if you can provide an alternate/update), since over the years companies are absorbed by others, disappear, split up, change their web site etc. Suggesting Additions/Corrections etc. This is a volunteer, unfunded effort. Commercial Monitoring Tools, not integrated with an NMP [Contents] Public Domain or Free Network Monitoring Tools [Contents] Related:  Network/Security

Wireless Tips – Does Your Wireless Router Keep Disconnecting or Dropping the Connection? I’ve had a Netgear wireless router for about a year now and it’s been pretty good until a couple of weeks back all of sudden my wireless connection kept dropping or I could not connect to the router unless I restarted the router! It was a royal pain in the butt, but because I’m lazy I didn’t get around to fixing it earlier! If you’re in the same situation, here’s what you can do to fix the problem! The issue is usually caused by one of two things: the driver for your wireless card or the firmware version on your router (basically the driver for the router). First, you’ll need to go to the web site for the manufacturer of your computer: Dell, HP, Toshiba, etc and go to their support or driver downloads page. Dell – HP – Toshiba – Sony –

Internet Research, Anti-Phishing and PCI Security Services | Netcraft How to Crack a Wi-Fi Network. | Arrow Webzine 1.Back Track Today we’re going to run down, step-by-step, how to crack a Wi-Fi network with WEP security turned on. Dozens of tutorials on how to crack WEP are already all over the internet using this method. Seriously—Google it. This ain’t what you’d call “news.” But what is surprising is that someone like me, with minimal networking experience, can get this done with free software and a cheap Wi-Fi adapter. Unless you’re a computer security and networking ninja, chances are you don’t have all the tools on hand to get this job done. * A compatible wireless adapter—This is the biggest requirement. * A BackTrack 3 Live CD. * A nearby WEP-enabled Wi-Fi network. * Patience with the command line. To crack WEP, you’ll need to launch Konsole, BackTrack’s built-in command line. First run the following to get a list of your network interfaces: The only one I’ve got there is labeled ra0. Now, run the following four commands. {*style:<i>airmon-ng stop (interface) ifconfig (interface) down </i>*} 3.

How to Hide Files in JPEG Pictures If you’re looking to hide files on your PC hard drive, you may have read about ways to encrypt folders or change the attributes on a file so that they cannot be accessed by prying eyes. However, a lot of times hiding files or folders in that way requires that you install some sort of software on your computer, which could then be spotted by someone else. I’ve actually written quite a few articles on how you can hide files and folders in Windows XP and Vista before, but here I’m going to show you a new way to hide files that is very counter-intuitive and therefore pretty safe! Using a simple trick in Windows, you can actually hide a file inside of the JPG picture file! You can actually hide any type of file inside of an image file, including txt, exe, mp3, avi, or whatever else. Hide File in Picture In order to accomplish this task, you will need to have either WinZip or WinRAR installed on your computer. Create a folder on your hard drive, i.e. Now here’s the fun part! And that’s it!

64 Things Every Geek Should Know « Caintech.co.uk If you consider yourself a geek, or aspire to the honor of geekhood, here’s an essential checklist of must-have geek skills. The term ‘geek’, once used to label a circus freak, has morphed in meaning over the years. What was once an unusual profession transferred into a word indicating social awkwardness. As time has gone on, the word has yet again morphed to indicate a new type of individual: someone who is obsessive over one (or more) particular subjects, whether it be science, photography, electronics, computers, media, or any other field. A techie geek is usually one who knows a little about everything, and is thus the person family and friends turn to whenever they have a question. USB – Universal Serial BusGPU – Graphics Processing UnitCPU – Central Processing UnitSATA – Serial ATAHTML – Hyper-text Markup LanguageHTTP – Hypertext Transfer ProtocolFTP – File Transfer ProtocolP2P – Peer-to-peer sharing (See 2. 1. 3. Here’s what one looks like: 4. 5.

What You Need to Know About the Java Exploit On Thursday, the world learned that attackers were breaking into computers using a previously undocumented security hole in Java, a program that is installed on hundreds of millions of computers worldwide. This post aims to answer some of the most frequently asked questions about the vulnerability, and to outline simple steps that users can take to protect themselves. Update, Jan. 13, 8:14 p.m. ET: Oracle just released a patch to fix this vulnerability. Read more here. Q: What is Java, anyway? Q: So what is all the fuss about? Q: Yikes. Q: How do I know if I have Java installed, and if so, which version? Either way, it’s important not to get too hung up on which versions are affected, as this could become a moving target. Q: A site I use often requires the Java plugin to be enabled. Q: I am using a Mac, so I should be okay, right? Q: I don’t browse random sites or visit dodgy porn sites, so I shouldn’t have to worry about this, correct? Q: Okay, I think I’m covered on Java.

The World's First Free Cisco Lab - Firewall.cx Cisco Networking, Security VPN, Routing & VoIP CCME Portal, Linux Tutorials Hot Wire Your Car From Wired How-To Wiki Nine times out of ten, the term "hot-wire" summons images of car theft. Of course, anyone who's been stranded in a hostile environment without their car keys knows better. Here's the trick to getting your vehicle moving again. This article is a wiki. What you'll need Proof of ownership of the vehicle Slotted screwdriver Wire stripper Insulated gloves Try the screwdriver It's not pretty, but a screwdriver can save you some trouble. If you're considering hot-wiring your car, chances are you're already in dire straits. No such luck? Remove the ignition cover Be careful not to do permanent damage when removing the cover. Before continuing, be sure to exercise extreme caution. The first step is to gain access to the wiring. Identify the battery and starter wires Consult your vehicle's manual to get the correct wire color code. You'll typically see three pairs of wires running into the back of the cylinder. Here's where it gets tricky. Strip and connect the power wires

Open Source Applications « Arrow Webzine GIMP – The GNU Image Manipulation Program is a Photoshop replacement that doesn’t have “quite” as much functionality but it’s excellent for free. It comes installed by default on many Linux distros and is also available in Windows. Worth a look. Inkscape – Inkscape is an Open Source vector graphics editor, with capabilities similar to Illustrator, Freehand, CorelDraw, or Xara X using the W3C standard Scalable Vector Graphics (SVG) file format. Paint.net – A really good, lightweight alternative to Photoshop. XnView – XnView is software to view and convert graphic files, apparently really simple to use and supports more than 400 graphics formats. ImageMagick – A lesser known application but it offers the ability to “create, edit, and compose bitmap images. Irfanview – OpenOffice –