Tips on how to make a video news report 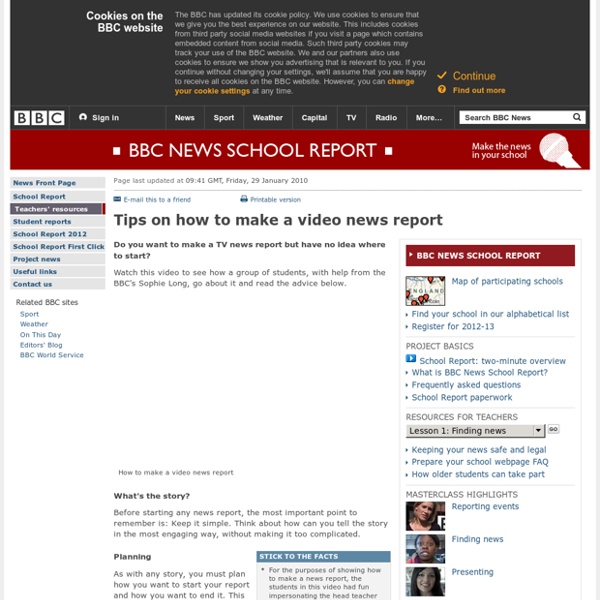 Do you want to make a TV news report but have no idea where to start? Watch this video to see how a group of students, with help from the BBC's Sophie Long, go about it and read the advice below. How to make a video news report What's the story? Before starting any news report, the most important point to remember is: Keep it simple. Think about how can you tell the story in the most engaging way, without making it too complicated. Planning As with any story, you must plan how you want to start your report and how you want to end it. When planning your report, you will need to consider the five Ws. What - What is the story? Why - Why is the story important to your audience? Who - Who is involved? Where - Where is the story happening, and where is the best place to film? When - Has the story already happened, or is it about to happen? By planning each of these points in detail, you'll know exactly what you need to film, where and when. Filming A basic TV news report is made up of five parts:

US Presidential Election ⋆ Intermediate, Themes Background 2016 presidential candidates Basic details of each candidate’s backgroundWhere the Candidates Stand on 2016’s Biggest IssuesWhat happens when … and how The important dates, Feb-Nov, listed and explained2016 Primary Results and Calendar Quickview of the results so far by NYTimes Warm-up What do kids want in a president? (1:20) Kids talk about what kind of person they think the next president should be like.“Slow Jam the News” with President Obama (7:05) Jimmy Fallon and President Obama slow jam the news, discussing Obama’s legacy, accomplishments and thoughts on the 2016 election.44 Presidents A rap song made after Obama became presidentCouch Commander (4:45) What will Obama do after his presidency?

The Seven Best Video Website for ELT Students - Kieran Donaghy As part of the launch of the website I’m organising a prize draw for my new book Film in Action. Everybody who subscribes to the website in the months of February and March will be entered into the draw. The Internet now offers students the opportunity to improve their lexical, listening and speaking skills through watching short film clips, videos and short films.

The Primary Differences Among Major International English Dialects The British Empire hasn’t been in existence for almost three-quarters of a century. At the peak of its might, it covered close to a quarter of the world’s land area and ruled a fifth of its population. But the empire changed, transformed, and passed as all things pass. When the territories Britain had conquered gained freedom, there was one thing that remained as evidence of how grand the empire once was—the English language. It’s the second most common language in the world in terms of the number of native speakers; it’s the most widely spoken language of all when you include people who use it as a second language.

How to Improve Your English Pronunciation to Talk Like a Native “What?” “Can you say that again?” How many times do you hear this when you’re speaking? Even if your vocabulary and English grammar are perfect, it can still be difficult for people to understand you because of your pronunciation. Matilda lessons Matilda is one of Roald Dahl's best-known stories. The story of the little girl with a big brain and mysterious magical powers, her kind teacher Miss Honey and her formidable Headmistress Miss Trunchbull has entertained parents and children alike for generations since it was first published in 1988. If you're feeling inspired to explore some of the themes from the story in your own classroom, our selection of lesson plans invites students to develop various skills through wordplay, drama and many other methods. Download the lesson plans using the panel on the right, and take a look at our other educational resources and ways to have fun with your class, from Dahlicious Dress Up Day to Puffin Virtually Live. You can also plan a trip to the Roald Dahl Museum for your class - find out more here.