Mercurydentalfillings.jpg (JPEG Image, 1944x1656 pixels) - Scaled (38%) New Concerns Arise for Children’s Dental XRays. December 06, 2010 | 33,769 views Share Children and adolescents are particularly vulnerable to radiation, which has led doctors to start a national campaign to protect them by reducing their exposure to diagnostic radiation.

But there is at least one place where the message has not taken hold -- the dental office. Most dentists continue to use outmoded X-ray film that requires higher amounts of radiation. In addition, orthodontists are embracing a new scanning device that emits significantly more radiation than other methods. The New York Times reports: "... How root canals lead to a diseased body and what you can do to about it. 9 Natural Ways To Treat Periodontal Disease.

Periodontal disease is an inflammatory condition of the gums and support structures in the mouth. 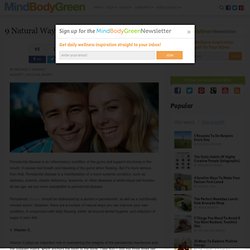 It causes bad breath and bleeding of the gums when flossing. But it's more serious than that. Periodontal disease is a manifestation of a more systemic condition, such as diabetes, anemia, vitamin deficiency, leukemia, or other diseases of white blood cell function. As we age, we are more susceptible to periodontal disease. Periodontal disease should be addressed by a dentist or periodontist, as well as a nutritionally minded doctor. 1. Vitamin C plays an important role in maintaining the integrity of the periodontal membrane and the collagen matrix, which anchors the tooth to the bone. 2.

Vitamin A deficiency predisposes a person to periodontal disease. 3. Zinc's importance in treating periodontal disease cannot be overstated. 4. These two nutrients function in tandem and seem to deter periodontal disease by counteracting the effects of free radicals, which are extremely damaging to gums. 5 Non-Toxic Ways To Whiten Your Teeth. Until recently, I'd always believed that the only way to a sparkling smile was with toxic chemicals and laser beams. 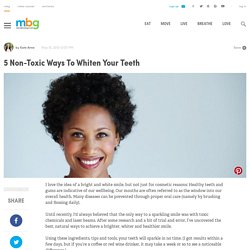 After some research and a bit of trial and error, I’ve uncovered the best, natural ways to achieve a brighter, whiter and healthier smile. Using these ingredients, tips and tools, your teeth will sparkle in no time. (I got results within a few days, but if you’re a coffee or red wine drinker, it may take a week or so to see a noticeable difference.) Coconut Oil Might Combat Tooth Decay. By Dr. 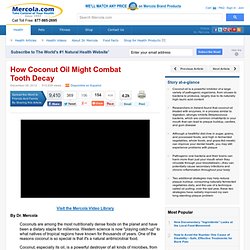 Mercola Coconuts are among the most nutritionally dense foods on the planet and have been a dietary staple for millennia. Western science is now "playing catch-up" to what natives of tropical regions have known for thousands of years. One of the reasons coconut is so special is that it's a natural antimicrobial food. Coconut, especially its oil, is a powerful destroyer of all kinds of microbes, from viruses to bacteria to protozoa, many of which harm human health. "Incorporating enzyme-modified coconut oil into dental hygiene products would be an attractive alternative to chemical additives, particularly as it works at relatively low concentrations. The work also contributes to our understanding of antibacterial activity in the human gut, which helps maintain the balanced flora necessary for a strong immune system. "Our data suggests that products of human digestion show antimicrobial activity.

The Many Health Benefits of Coconut Oil In the 1900s, Dr. Did You Know? Mercury Fillings and Immune System. Most Common Sources of Mercury Exposure. The Single Most Effective Ayurvedic Practice for Your Mouth. Do you ever wish you could brighten those pearly whites without chemicals? 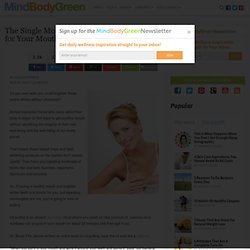 Almost everyone I know who cares about their body is eager to find ways to get positive results without sacrificing the integrity of their own well-being and the well-being of our lovely planet. That means those bleach trays and teeth whitening products on the market don't exactly qualify. They have you ingesting boatloads of toxins like coal tars, fluorides, aspartame, aluminum and benzene. So, if having a healthy mouth and brighter, whiter teeth is a priority for you, but ingesting carcinogens are not, you're going to love oil pulling. Oil pulling is an ancient Ayurvedic ritual where you swish oil (like coconut oil, sesame oil or sunflower oil) around in your mouth for about 20 minutes and then spit it out. Dr. "When you put it in your mouth and work it around your teeth and gums it “pulls” out bacteria and other debris.

When done daily this practice is incredibly effective for: Secrets Your Dentist Doesnt Want You To Know. September 19, 2009 | 166,103 views Share Here are the secrets your dentist may not want you to know -- but you need to know to get the best care possible: Secret #1: Your dentist may not be as educated as you think. 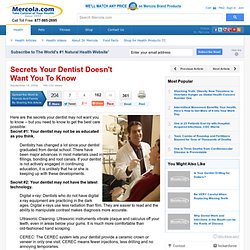 Dentistry has changed a lot since your dentist graduated from dental school. There have been major advances in most materials used in fillings, bonding and root canals. Secret #2: Your dentist may not have the latest technology. Digital x-ray: Dentists who do not have digital x-ray equipment are practicing in the dark ages. Secret #3: Your dentist may be using mercury.