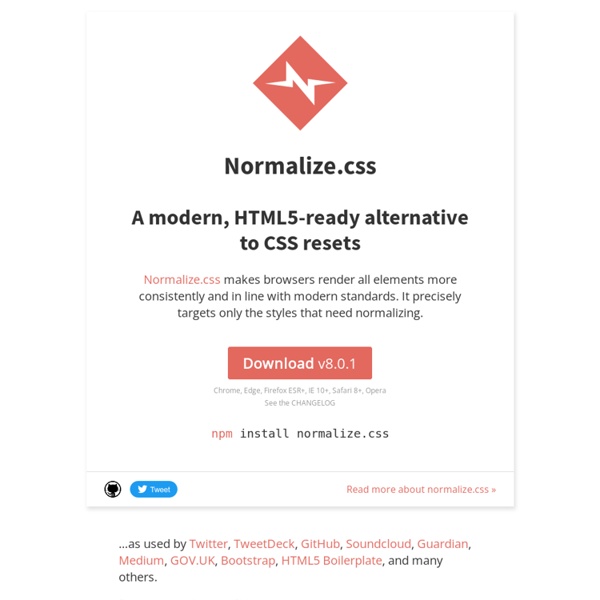 8 Things Newbie Web Designers Should Know About SEO Even the most SEO obsessed web site owners still want a site that looks good. Design aesthetics play a huge role in the success or failure of any site. Elements of design can impact conversions, credibility, and engagement. But some designs can also limit a web site’s search engine accessibility. Popular Nordic Ruby Conference El Sendero del Cacao Full Frontal 2011 CSS Tools: Reset CSS The goal of a reset stylesheet is to reduce browser inconsistencies in things like default line heights, margins and font sizes of headings, and so on. The general reasoning behind this was discussed in a May 2007 post, if you're interested. Reset styles quite often appear in CSS frameworks, and the original "meyerweb reset" found its way into Blueprint, among others. The reset styles given here are intentionally very generic.

CSS 3D Clouds An experiment on creating volumetric 3d-like clouds with CSS3 3D Transforms and a bit of Javascript. Check out the tutorial here! Move the mouse to rotate around and mouse wheel to zoom in and out. Hit space to generate a new cloud. Works on Firefox (faster if Nightly), Chrome and Safari. holmes.css - CSS Markup Detective What does it do? The holmes.css file will display either an error (red outline), a warning (yellow outline), or a deprecated style (dark grey outline) for flags such as: Missing required attributes on tags, such as name attributes on inputs (lots of these) Potentially improvable markup, such as links with href="#" Deprecated and Non-W3C Elements - see W3C.org's article on obselete tags Non-W3C Attributes - as above, just the most important ones since there are MANY Thanks to Anthony Mann, holmes now displays an informative error message when you hover over the element. Support for :after/::after on images is non-existent however in most browsers.

Sobees Launches iPad App NewsMix, A Socially Curated Digital Magazine Sobees has made a business of creating innovative social media clients, particularly focusing on bringing Twitter, Facebook and social search to the a variety of platforms. Today, the developer is getting into the news business with the launch of NewsMix, an iPad app which presents news and content shared by your social circle in a magazine format on the device. The app, which costs $2.99 in the App Store, allows you to create and mix a digital magazine composed of content shared in your Twitter, Facebook and RSS feeds (Google Reader and feed search). The app will categorize content in a magazine or show news in a separate timeline format for Facebook and Twitter.

Screenshots - CSS-Tricks Gallery Illustration by Erica Sirotich Loading... *May or may not contain any actual "CSS" or "Tricks". CSS Reset Note: The files "reset.css" and "reset-context.css" are deprecated, use "cssreset.css" and "cssreset-context.css" instead. The foundational CSS Reset removes the inconsistent styling of HTML elements provided by browsers. This creates a dependably flat foundation to build upon. BonBon - Sweet CSS3 Buttons There was a goal: Create CSS buttons that are sexy looking, really flexible, but with the most minimalistic markup as possible. And voila.. here they are, the BonBon Buttons. Named after the French word for "Candy".

CSS Stress Testing and Performance Profiling / Andy Edinborough Now let me explain: I have been losing my sanity over the oddest issue. The project I’m working on right now has a fairly complex stylesheet. Performance for the site is absolutely critical. I’ve done my best to squeeze and optimize every line I can. In all browsers, it runs like a champion. Except IE9.

5 Good Things To Use As Pinned Tabs In Your Browser The Big Three web browsers all now have pinning ability. IE9 can pin to the taskbar, Mozilla Firefox 5 can pin as "app tabs" and Chrome can pin tabs as well. I’m going to skip IE9 here because its pinning ability is limited to the Windows taskbar and not in-browser; even though it can pin, I want to concentrate on in-browser stuff only. An example of pinned tabs looks like this: transform The CSS transform property allows you to visually manipulate element, literally transforming their appearance. or with proper prefixes: There are several different transform functions each that applies a different visual effect. Note that the actual space on the page that the element occupies remains the same as before transition. Rotate