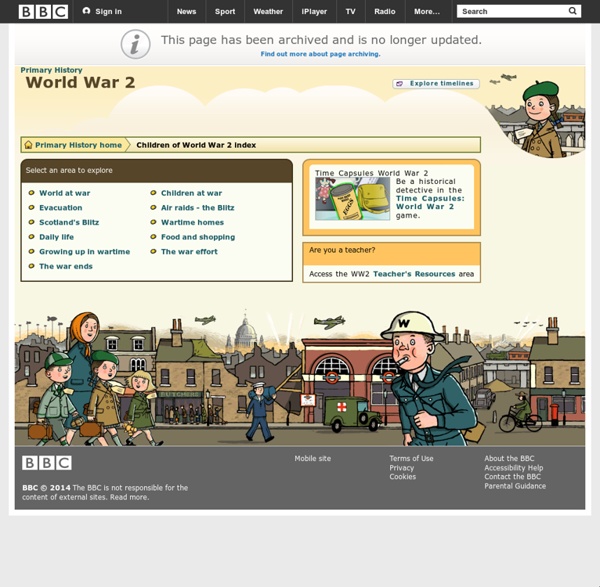 Second World War 1939 - 1945 Our records cover the entire conflict from Churchill's desk downwards. Read the PM's signed orders and top level diplomacy with Roosevelt and Stalin alongside reports from all theatres of war and every aspect of the situation on the Home Front - from what was shown in the nation's cinemas to recipes for British kitchens. World War 2 Chronology - Historic UK War between the so-called Axis powers of Germany, Italy and Japan on one side and Britain, the Commonwealth, France, the USA, the USSR, and China (the Allied powers) on the other. A truly world war, it was fought throughout Europe, Russia, North Africa, and across the Atlantic and Pacific seaboards. It is estimated that some 55 million lives were lost in total, including 20 million Russians and in excess of 6 million Jews killed in the holocaust. The origins of the war are attributed to Germany’s reluctance to accept the geographic frontiers previously agreed at the ‘Treaty of Versailles’ following World War I, and to the aggressive foreign policy of the then German Chancellor, Adolf Hitler. Returning from Munich in 1938 with the above agreement bearing both his and Adolf Hitler’s signatures, Neville Chamberlain believed he had secured peace: ‘I believe it is peace for our time’. Celebrations for VJ Day, 1945

Top 10 Teen Magazines and Complete List of 22 Teen Magazines from the US and the UK Seventeen is a magazine that covers the issues that matter to teenage girls. Offering a wide-variety of content, from quizzes and romance advice, to beauty tips and fashion, Seventeen is among the most popular teen magazines. A teen version of the elegant fashion magazine, Teen Vogue discusses topics like prom, dating, style, celebrities, and other concepts popular with fashionable teenage girls. Teen Ink magazine is truly unique, because it is not only for teenagers, but it's written by teens as well. With the help of English teachers throughout the country, Teen Ink collects the best fiction and non-fiction from teenage authors and publishes it in their magazine. If you have a Boy Scout in your life, this is the magazine for them.

The Battle of Stalingrad The Battle of Stalingrad is considered by many historians to have been the turning point in World War Two in Europe. The battle at Stalingrad bled the German army dry in Russia and after this defeat, the Germany Army was in full retreat. One of the ironies of the war, is that the German Sixth Army need not have got entangled in Stanlingrad. Army Groups A and B were well on their way to the Caucasus in south-west Russia, when Hitler ordered an attack on Stalingrad. From a strategic point of view it would have been unwise to have left a major city unconquered in your rear as you advanced.

The Blitz The Blitz was a German bombing campaign against Britain in 1940 and 1941, during the Second World War. The term was first used by the British press and is the German word for 'lightning'.[4] The Germans conducted mass air attacks against industrial targets, towns, and cities, beginning with raids on London towards the end of the Battle of Britain in 1940, a battle for daylight air superiority between the Luftwaffe and the Royal Air Force over the United Kingdom. By September 1940, the Luftwaffe had failed and the German air fleets (Luftflotten) were ordered to attack London, to draw RAF Fighter Command into a battle of annihilation.[5][6] Adolf Hitler and Reichsmarschall Hermann Göring, commander-in-chief of the Luftwaffe, ordered the new policy on 6 September 1940. From 7 September 1940, London was systematically bombed by the Luftwaffe for 56 out of the following 57 days and nights.[7] Most notable was a large daylight attack against London on 15 September. Background[edit]

World War II: Home Front World War II, or "The Good War" as it has often been called, ushered in new opportunity, new prosperity, and an entirely new lifestyle for many Americans. Wartime mobilization pulled the American economy out of depression by employing millions and invigorating the nation as a whole. "The Good War," however, didn't provide the remedy for many social problems, and in some cases rapid population movement, concern over national security, and wartime rhetoric only exacerbated racial, ethnic, and class-based tensions at home. The Official Guide to New York City top attractions by nycgo.com staff Central Park. Photo: Julienne Schaer • Times Square. Photo: Marley White Battle of Stalingrad - World War II The Russians hailed it a “contemporary Cannae,” and the Germans condemned it as a Rattenkrieg (Rat War). Both descriptions were fitting. In the Battle of Stalingrad, Soviet forces surrounded and crushed an entire German army under General Friedrich Paulus, emulating Hannibal’s encirclement and destruction of a Roman army under Aemilius Paulus in 216 B.C. For both sides, Stalingrad became a desperate ordeal of rodentlike scurrying from hole to hole. This monumental battle is justly considered a turning point in the war on the Eastern Front and one of the most crucial engagements of World War II.

Rationing in Britain during World War 2 During World War II all sorts of essential and non-essential foods were rationed, as well as clothing, furniture and petrol. To make the British weak, the Germans tried to cut off supplies of food and other goods. German submarines attacked many of the ships that brought food to Britain. Before the war, Britain imported 55 million tons of food, a month after the war had started this figure had dropped to 12 million. The Ration Book became the key to survival for nearly every household in Britain. Every member of the public was issued with a ration book.