20 Furniture Marvels For The Futuristic Home 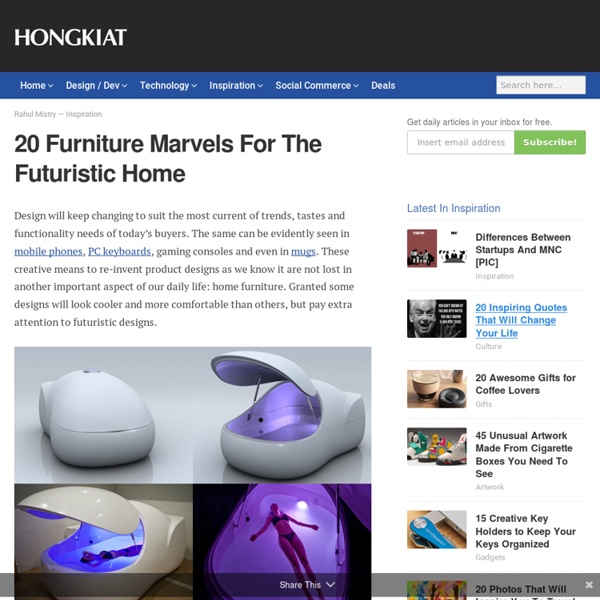 Design will keep changing to suit the most current of trends, tastes and functionality needs of today’s buyers. The same can be evidently seen in mobile phones, PC keyboards, gaming consoles and even in mugs. These creative means to re-invent product designs as we know it are not lost in another important aspect of our daily life: home furniture. Granted some designs will look cooler and more comfortable than others, but pay extra attention to futuristic designs. This is why I’d like to highlight some futuristic designs in furniture that could possible grace our homes in the not-so-distant future. For some lucky home and office owners, the future is already here. Read Also: Cool Futuristic/Concept Gadgets That Really Inspire Z. Concoon Bed Wasserbetten has taken design to new intergalactic heights and touched the rings of Saturn with this amazing bed using innovative technology, and incorporating a Yacht design. Innermost Asteroid Lamp Kure Family Dining Table Hi-Can High Fidelity Canopy

Customer Assistant - Part Time - Rogerstone Return to Search Results Job Introduction Tesco: Rogerstone Contract Type: Permanent British drugs survey 2014: drug use is rising in the UK – but we're not addicted Usage More than 15 million Britons, nearly one in three of the adult population, have taken illegal drugs and the proportion of the nation who have ever taken drugs is increasing over time; when the Observer last conducted research into national drug usage and attitudes in 2008, 27% of the population had taken illegal drugs. That figure has now increased to 31%. Last time round we noted that, while men were more likely than women to take drugs, the gender gap appeared to be closing, based on a comparison between 2008 and 2002 data. That process is now complete, with both sexes equally likely to have taken drugs.

Plugged-In Over Preppy: Teenagers Favor Tech Over Clothes Photo For some teenagers, wearing last season’s jeans will always be unthinkable. But a growing number consider texting on a dated smartphone even worse. For teenage apparel retailers, that screen-obsessed teenager poses a big threat in the still-important back-to-school sales season. Immersive Cocoon // Step Into The Future Directed & 3D CG by Oliver Zeller, Video Courtesy of I-Cocoon The world of interfaces continues to evolve and surprise us. We still think of it as something we can hold, fold and place in our bag to carry anywhere. What if you can be part of an intuitive and holistic experience where your interface is not reduced to a mouse-click or a two dimensional tablet screen. Welcome to the Immersive Cocoon, a surround display dome with sophisticated motion sensor technology that inspired the technology depicted in 'Minority Report'.

Post-viral fatigue syndrome Classification[edit] In the WHO's ICD-10, PVFS is listed as sub-category at G93.3 under category G93 'other disorders of the brain'.[2] Listed under PVFS is benign myalgic encephalomyelitis.[3] The term chronic fatigue syndrome (CFS) is also direct to sub-category G93.3 in the tabular list and alphabetic index of the ICD-10.[2][4] Post-viral syndromes may also include: post-polio syndrome and possibly chronic mononucleosis or other severe chronic viral infections. Healing trip: how psychedelic drugs could help treat depression Next year, if all goes to plan, a dozen patients with clinical depression will be invited to a UK laboratory and given psilocybin – the psychedelic ingredient found in magic mushrooms. Over the next four or five hours, many of these volunteers will experience dream-like euphoria as colours, smells and sounds become more intense, perception of time distorts and their sense of self dissolves. Some may feel a surge of electricity through their bodies, sudden clarity of thought or hilarity.

Phones need 'bed mode' to protect sleep Image copyright Thinkstock Smartphones, tablets and e-readers should have an automatic "bedtime mode" that stops them disrupting people's sleep, says a leading doctor. Prof Paul Gringras argued the setting should filter out the blue light that delays the body clock and keeps people awake later into the evening. The doctor, from Evelina Children's Hospital in London, said every new model was "bluer and brighter". He said manufacturers needed to show more "responsibility". As it gets darker in the evening, the body starts to produce the sleep hormone melatonin - which helps people nod off.

Smart glass 2 Microsoft has posted an awesome new concept video with some ubercool new interfaces that could be here in five to ten years, estimates Kurt DelBene, President, Microsoft Office Division. That sounds a bit conservative. “All of the ideas in the video are based on real technology,” he said. “Some of the capabilities, such as speech recognition, real time collaboration, and data visualization, already exist today. Others are not yet available in specific products, but represent active research and development happening at Microsoft and other companies.” The European Voluntary Service (EVS) Lots of students want to spend their year abroad volunteering, but are put off by the costs – how on earth can you live abroad for a year with no money? I felt the same way, until I found out the European Voluntary Service. I’ve just graduated with a degree in French and Russian, and I’m currently doing a year-long voluntary project in Samara, Russia, working for an international youth exchange charity called Lastochki. Other volunteers I know here are working in kindergartens, hospitals and with disabled people.