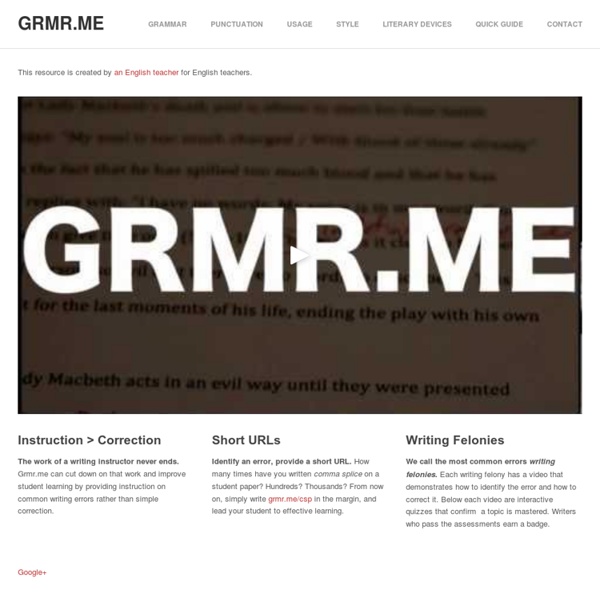 Picture Book Activities What a delightful, whimsical book! The Leaf Man uses the shapes and colours of different leaves as inspiration for its illustrations. The story explores where the mythical ‘Leaf Man’ goes, whenever the wind blows. Texting’s Effect on Grammar is Debated MONDAY AUGUST 13, 2012, 9:26 AM BY ELYSE TORIBIO STAFF WRITER www.northjersey.com If the average American teen sends a staggering 3,000 text messages a month, you can be sure that there are more than a few letters, commas and apostrophes missing. But taking a lax approach on grammar and spelling on mobile phones can have a lasting effect on schoolwork: A new study has found that students who had recently sent or received a text message performed considerably worse on a grammar exam than those who had not. The study, of 228 children ages 10-14 by the Pennsylvania State University’s Media Effects Research Laboratory, shows that this phenomenon is no LOL matter.

7 Creative Student Design Projects to Try with Canva There’s plenty of compelling evidence supporting the notion that visual-based learning is tied to better retention and recollection of new information as well as measurable success for students in the classroom. A study by 3M Corporation yielded astounding results indicating that 90% of information transmitted to the brain is visual, and visuals are processed 60,000 times faster in the brain than text. The rapid growth of edtech has resulted in a slew of amazing apps, but one that has taken hold for educators everywhere is Canva. Speld Training Courses 27th& 28th September 2014 The Langham – Central Auckland Be sure to keep this weekend free for our exciting national conference. This year the special focus is working memory – critical to children and adults with learning disabilities. The conference will be a unique opportunity to meet and hear from a range of experts in the field:

Great Infographics for Language Teachers Part 2 Part One : ( Click HERE to access this part ) Definite and indefinite articlesAll about AdjectivesPunctuation Passive VoiceWhen to use e.g and i.e Here is what the second part is aboutPart Two : ( Scroll down to read Part Two ) 1- How to Use Quotation Marks and Punctuation 2- Subjective I wish I were 3- Modal Verbs 4- Parallel Structure The Oatmeal - Comics This is a grammar comic about the proper usage of who versus whom. A look at the meaning of "flushing out an idea." This comic will LITERALLY make butterflies explode out of your underpants. A guide explaining when to use i.e. instead of e.g. A little bit ironic, dontcha think?

ed.ted At the heart of human communication is the question of how we create meaning. A basic consideration of this process asks what message is being communicated to whom. The transactional model helps us to visualize the many moving parts that comprise human interaction. This model demonstrates that communication is an ongoing process. We co-construct meaning together as we use feedback to exchange ideas. An important part of this process is the willingness to listen to what is being communicated. Specialised help for children with dyslexia pays dividends Published: 6:07AM Saturday August 16, 2014 Source: ONE News Compelling research shows learning outcomes for children with dyslexia can be vastly improved. Specialised, early intervention can significantly boost success at school for a child with dyslexia, a pilot study shows.