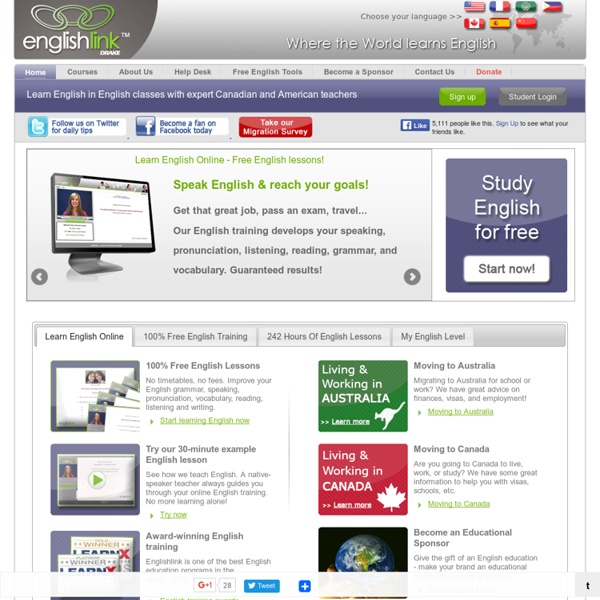 100% Free English Lessons No timetables, no fees. Improve your English grammar, speaking, pronunciation, vocabulary, reading, listening and writing. Start learning English now Try our 30-minute example English lesson See how we teach English. Try now Award-winning English training Englishlink is one of the best English education programs in the world...100% free for you! English training awards Moving to Australia Migrating to Australia for school or work? Moving to Australia Moving to Canada Are you going to Canada to live, work, or study? Moving to Canada Become an Educational Sponsor Give the gift of an English education - make your brand an educational sponsor nationally or globally. Promote your brand Related:  English speaking countries

Kidipede - History for Kids Free Online Grammar Check, Spelling, and More | PaperRater UNIT 1: DISCOVER ENGLISH SPEAKING COUNTRIES - English with Rose In this unit we'll carry out four different activities in order to learn such general facts of the English Speaking country you're working on as: - Its location in the world map.- Its flag.- Its official language.- Its currency.- Its total area.- Its President or Prime Minister (amongst other data) 20 Common Grammar Mistakes I’ve edited a monthly magazine for more than six years, and it’s a job that’s come with more frustration than reward. If there’s one thing I am grateful for — and it sure isn’t the pay — it’s that my work has allowed endless time to hone my craft to Louis Skolnick levels of grammar geekery. As someone who slings red ink for a living, let me tell you: grammar is an ultra-micro component in the larger picture; it lies somewhere in the final steps of the editing trail; and as such it’s an overrated quasi-irrelevancy in the creative process, perpetuated into importance primarily by bitter nerds who accumulate tweed jackets and crippling inferiority complexes. But experience has also taught me that readers, for better or worse, will approach your work with a jaundiced eye and an itch to judge. Who and Whom This one opens a big can of worms. Which and That This is one of the most common mistakes out there, and understandably so. Lay and Lie This is the crown jewel of all grammatical errors. Moot

Introduction to English-speaking Countries (Lesson Outlines) Foreign teachers at Chinese universities are sometimes asked to teach a course with a name such as "A General Survey of English-speaking Countries", or "An Introduction to English-speaking Countries", or similar. I taught this course for a semester in 2003, and found the lesson preparation quite overwhelming. This was especially the case since I was given very little guidance and no clear objectives. I would like to make it clear that this is not an ideal teaching plan, and if I taught the course again I would certainly make some alterations. The course was for second-year English majors. Lessons were given in a multi-media lecture theatre, with two classes (more than 60 students) attending at the same time. Each week, I asked the students to read a section of the textbook and answer some questions. I prohibited both copying from the textbook and copying from other students. The Powerpoint presentations listed below are by no means complete lesson plans.

40+ Tips for Grammar and Punctuation After all these years you finally have the courage and opportunity to write the email announcing that you and you alone have single handedly saved the company from utter disaster. You’re excited, you type it, you spell check it, and you hit send.Everything is great except that your gold star memo has dangling modifiers, double negatives and run-on sentences colliding with each other. Now I am no grammar whiz but I know a good resource when I see it. Purdue University maintains an purdue.edu/" target="_blank">online writing lab and I spent some time digging through it. Learn and enjoy! • A or An? • Adjective or Adverb? • Adjectives with Countable and Uncountable Nouns • Using Articles ( A/An/The ): with 2 exercises and answer keys Nouns • A Little Help with Capitals • Count and NonCount Nouns (with Plurals, Articles, and Quantity Words): with 2 exercises and answer keys • Count and NonCount Nouns (with Articles and Adjectives): with exercise and answer key Prepositions Pronouns • Pronoun Case Commas

English Speaking Countries www.EFLSensei.com Knowledge of English Speaking Countries (or Introduction to English Speaking Countries) is a common course for second-year Education majors in China. Jump to Lesson Plans It is an academic course focusing on geographical and historical facts, and the political, economic, and social systems of English-speaking countries. Chinese English teachers often teach this course, but occasionally native English teachers are asked to teach the course. There are two textbooks that are usually assigned with the course that are published in China, The Society and Culture of Major English-Speaking Countries. Book 1 is mainly about the UK and Book 2 is mainly about the US. The syllabus for this course was designed for a class of 20 – 30 students. See the Downloads section for the Course Outline. See also:

Free English Grammar Lessons and Tests Access VG1: Extra text: English in Jamaica The story of how English came to Jamaica is closely connected to one of the most shameful chapters in the history of the British Empire: the slave trade. The British conquered Jamaica from Spain in 1692 and the island soon became a producer of sugar. Harvesting sugar cane requires a lot of manpower, more than the British could supply themselves. The local population was no use – they had already been wiped out. The solution was found over the ocean in West Africa. For over 200 years thousands of slaves were brought over the Atlantic to toil under the beating sun in Jamaican sugar plantations. The slaves were taken from different areas and spoke different languages. Today Standard English is the official language of the island and in most formal settings – in government administration and schools, for example – while Jamaican English is used in the home and on the street.

The twelve tense system in English - an overview Not everyone agrees on what comprises a tense. It is common to talk about present, past and future tenses, but some people think a tense must involve inflection (or morphological change), that is a change in the form of the verb itself, as in Latin and many European languages, so they recognise only two tenses - past and present. On the other hand, one early grammar book talked of six tenses. In EFL/ESL we usually work on the basis that a tense combines a time (present, past or future) with an aspect (simple, continuous, perfect simple or perfect continuous). This gives us twelve active tenses. Although I will be talking a bit about individual tenses, my main aim here is to show how, in this way of looking at things, all twelve tenses fit into a neat, easy to understand scheme. What are tenses Some dictionaries define tenses as simply being about time: Others add a bit more: Introductory notes The five verb forms in English English has five verb forms. the infinitive1st formthe imperative

Synonyms which are really needed List of Synonmys A collection of important synonyms grouped in categories: for teachers, writers and students of English alike. Important Synonyms - Popular words to use instead Common Synonyms — sorted by Category These lists also contain examples for the most common 100 words or so; however, the intention is not to replace a thesaurus. Within the categories the sorting is alphabetical. Exact Synonyms According to one definition (attributed to Leibniz) two expressions are synonymous if the substitution of one for the other does not change the "truth value" of a sentence in which the substitution is made. In practice, some words are called synonyms, just because they are used to describe the same "fact" in different parts of the world. English is rich in synonyms because during the centuries it adopted a variety of foreign languages - most notably French, German and Latin. Now, what does this mean? Popular Synonyms Lists (also Antonyms) Synomizer » Synonyms and Antonyms in 5 Languages

7 Proposed Explanations for the Loch Ness Monster Let’s discuss the Loch Ness phenomenon. Does a mysterious beast really patrol one of Scotland’s deepest lakes? Or do any of these less fanciful explanations hold water? 1. Many Nessie witnesses have mentioned large, crocodile-like scutes (hardened plates) sitting atop the animal’s spine. 2. When a mighty Scottish pine dies and flops into the loch, it quickly becomes water-logged and sinks. 3. Some amazing eels live in and near the British Isles. Conger eels can exceed 10 feet in length and sometimes take gruesome bites out of unsuspecting divers. 4. On choppy days, lakes regularly distort the reflections of various objects (hills, trees, etc.) upon their surfaces. 5. When you’re looking at a floating object from some distance away, ascertaining its size can be difficult. 6. A fault line rests directly beneath Loch Ness, producing small tremors that release vast columns of bubbles. 7. Could Nessie’s head really be a trunk? All images courtesy of iStock.