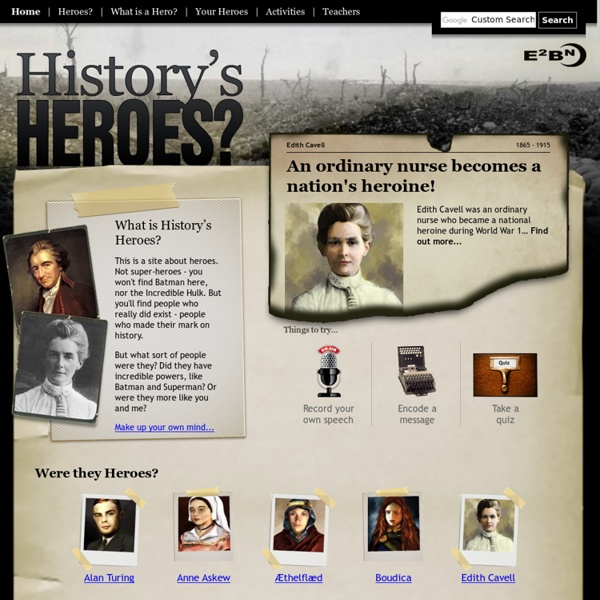 This is Me – Grade 7 Unit – The Canswedian English Teacher I was so lucky this year, in that my Grade 7s walked into my English class bright eyed and bushy tailed – ready to go. One boy put up his hand on the first day and declared, “I want to learn English, because I want to go to California.” From what I’ve been told, this is the middle-class Swedish dream. You do you little man – you do you. The Heroine and the Holocaust - Teachers - History's HEROES from E2BN This teaching idea is designed for use at KS 3 history. Why use this unit? Often, a good way into a topic is via one small section of it. This teaching idea provides just such an opportunity. In a terrible war, Poland's experience of World War 2 was uniquely terrible - a quarter of its population perished.

8 of World's Most Inspirational People - Oddee.com (inspirational people, inspiring people...) Inspirational people: living proofs that people can overcome anything. Eight inspiring people who defied their destiny. Nick Vujicic: a man with no limbs who teaches people how to get up Nick Vujicic was born in Melbourne, Australia with the rare Tetra-amelia disorder: limbless, missing both arms at shoulder level, and having one small foot with two toes protruding from his left thigh. History of Thanksgiving – Videos & Activities Highlights Thanksgiving Happy Thanksgiving! Encourage students to reflect on all they're thankful for this November 24. Teenage Problems Anonymous asked: my best friend just admited that she's a lesbian and she's in a relationship with another girl. she's my bestest friend and i dont know how to react. now its always really awkward :/ help? look, i’ve very clearly stated that i have a separate blog for advice. a separate blog. okay. i’m a nice person, so i’ll answer this anyways. basically, it’s only awkward if you make it awkward. she is still your best friend either way. the fact that she is attracted to girls doesn’t change her personality or what made you friends before. it’s not like you were friends with her specifically because you thought she was straight. it shouldn’t matter. you also need to look at it from her perspective.

Hero Subunit 3: Three Paragraph Essay on a Personal Hero – The Canswedian Eng... Subunit 3: Three paragraph essay on a personal hero. Ask the students to think about their personal hero, or someone they look up to. It could be a family member, singer, someone from history, whoever…It is mindblowing how many will say they don’t know. If they don’t have one – they can research. I showed a few people The White Helmets from Syria for example. One girl thought about her grandmother who was battling cancer.

Holocaust Memorial Day: remembering horror of Auschwitz 70 years on The site was also the death place for many people who did not fit into the Nazis' view of their world. Poles, lesbians, homosexuals and the disabled were amongst those also killed here. Over one and a half million people were killed at Auschwitz, including women and children The infamous sign, made by a prisoner, was erected by the Nazis after the Auschwitz barracks were converted into a labour camp to house Polish resistance fighters in 1940. Everyday heroes - 4 more inspiring true stories of bravery ~ Living Inspired 1. Sacrificing his life to save a stranger's Robert Cook, a 22-year-old skydiving instructor, was on a plane with 21-year-old Kimberley Dear. She was about to make her first ever skydive, and he was her instructor.

1 in 10 Native American deaths alcohol related - Health - Addictions WASHINGTON — Almost 12 percent of the deaths among Native Americans and Alaska Natives are alcohol-related — more than three times the percentage in the general population, a new federal report says. The report released Thursday by the federal Centers for Disease Control and Prevention, found 11.7 percent of deaths among Native Americans and Alaska Natives between 2001 and 2005 were alcohol-related, compared with 3.3 percent for the U.S. as a whole. Dwayne Jarman, a CDC epidemiologist who works for the Indian Health Service and is one of the study's authors, said it is the first national survey that measures Native American deaths due to alcohol. It should be a "call to action" for federal, state, local and tribal governments, he said. The researchers obtained their statistics by analyzing death certificates over the four-year period.

The man who cycled from India to Europe for love Image copyright PK Mahanandia Indian artist PK Mahanandia met Charlotte Von Schedvin on a winter evening in Delhi in 1975 when she asked him to draw her portrait. What eventually followed was an epic bicycle journey from India to Europe - all for love. The Heroes Unit: Subunit 2 – Modern Day Heroes – The Canswedian English Teacher Subunit 2: Modern day Heroes The purpose with this assignment is forcing students to get outside of their own backyards and hopefully get a little inspiration. There are so many role models out there that students are not aware of. The next step in this heroes unit is talking about present day heroes. I have four biographies I use: Malala, Aung San Sun Kyi, Mandela and Terry Fox. They are modern day badasses in my opinion.

The Christmas truce The Christmas Truce of 1914 is widely seen as one of the very few uplifting moments in the futility of the First World War. In this lesson, students will learn about the truce through listening to a podcast of the stories of soldiers who experienced it. After listening to this podcast, students will focus on the speakers’ use of narrative tenses and will go on to write a diary entry from the perspective of a WWI soldier. At Christmas 1914, there were a series of unofficial truces in no-man’s land. soldiers met between the trenches, talked, exchanged souvenirs and even played football. This is a photo of soldiers from the Royal Warwickshire Regiment talking happily with men from the 134th Saxon Regiment on Boxing Day. © IWM (HU 35801)

Everyday heroes - 3 inspiring true stories of bravery ~ Living Inspired 1. Hero jumps in front of a train to save a stranger At around one o'clock on January 2nd, 2007, 50-year old construction worker Wesley Autrey was waiting for a subway train with his two daughters, aged 4 and 6. All of a sudden, he noticed a man - 20-year old Cameron Hollopeter, collapse into a seizure and fall to the ground. Wesley immediately ran over to help him, alongside two women. With their help, Cameron could stand up again, but he couldn't fully regain his balance and was stumbling around.

Effects of European Colonization: Christopher Columbus and Native Americans The earliest explorers in the Western Hemisphere left a legacy that would shape the development of the Americas permanently. No matter what they came looking for, Europeans left behind death, horses, and metal. Explore our library of over 10,000 lessons Click "next lesson" whenever you finish a lesson and quiz.