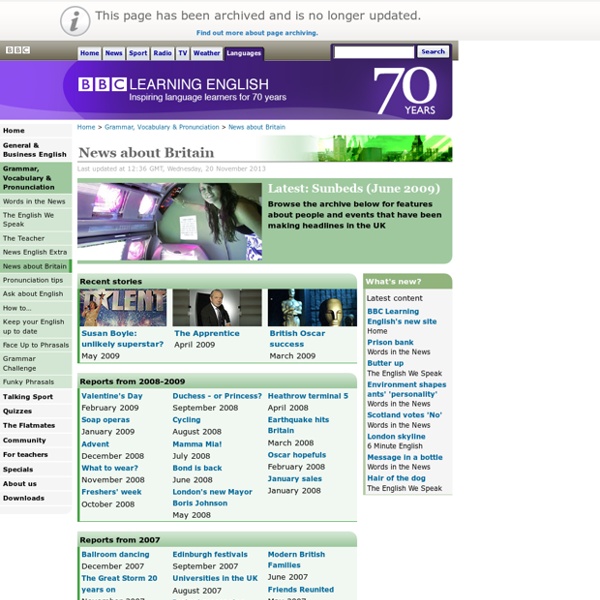 Related:  Words in the News

Weird museums | TeachingEnglish | British Council | BBC In this lesson students practise word building in preparation for part 3 of the Use of English test in the FCE exam. Through a series of activities students will become more aware of word ‘families’, enabling them to do the Use of English (part 3) more successfully. Topic: Weird museums - word building for FCE Use of English part 3 Level: B2 Aims: To remind students how to form new words from a ‘stem’ word.To familiarise students with part 3 of the Use of English test of the FCE exam.To extend students’ vocabulary by practising forming new words from stem words. Plan components Lesson plan: download Worksheets (1A, 1B, 2A+2B): downloadNote to teachers: cut worksheet 2A+2B in half in order to give the first half to students in group A and the second half to students in group B. By Katherine Bilsborough The plans and worksheets are downloadable and in pdf format - right click on the attachment and save it on your computer. Copyright - please read

Learning English - Words in the News - Corner shop or art gallery? Английский язык онлайн -> Native English BBC Learning English - Learning English Benefit fraud in the United Kingdom Benefit fraud is a form of welfare fraud as found within the system of government benefits paid to individuals by the welfare state in the United Kingdom. Definition of benefit fraud[edit] The Department for Work and Pensions (DWP) define benefit fraud as when someone obtains state benefit they are not entitled to or deliberately fails to report a change in their personal circumstances. The DWP claim that fraudulent benefit claims amounted to around £900 million in 2008–09.[1] The most common form of benefit fraud is when a person receives benefits, but continues or begins employment. In 2002, the DWP launched a 'Targeting Benefit Thieves' advertising campaign to spread their message that benefit fraud carried a criminal sanction. Examples of alleged benefit fraud[edit] In recent years the term benefit fraud has been used by the DWP to encompass a wider range of behaviours, beyond simultaneously claiming unemployment benefit whilst working in the informal labour market. Penalties[edit]

BBC Learning English - Learning English LearnEnglishTeens Rights Activists Criticize Trial of 17 Reporters in Turkey A trial of 17 journalists opened this week at a courthouse in Istanbul. The writers and media workers are accused of involvement in the failed attempt last July to overthrow Turkey’s government. The defendants face long jail sentences, of up to life in prison, if they are found guilty. The first hours of the trial on Monday were spent reading from more than 200 pages of charges. Journalists deny wrongdoing Government lawyers say the journalists are followers of the Turkish Islamic religious leader Fethullah Gulen. Much of the evidence noted by government lawyers did not deal with the journalists’ activities, but with their suspected ties to the clergyman. Gulen has denied involvement in the attempted coup. Nazli Ilicak writes a newspaper column. Ilicak and the brothers Mehmet Altan and Ahmet Altan are among the most famous writers and journalists facing charges. All 17 reporters have been detained for months. Rights groups voice strong concerns Emma Sinclair Webb is a researcher with the U.S.

Shakespeare - Hamlet | LearnEnglish Teens | British Council Hamlet, the Prince of Denmark, has come back from university to find that his father, the old king, is dead. His mother has married his father’s brother, Claudius, who is now king of Denmark. Hamlet is shocked that his mother has married so soon after his father’s death, and angry that she has married Claudius. Soon, a ghost is seen walking on the castle walls. The ghost looks like Hamlet’s father, the dead king. Hamlet can’t believe that his mother would marry the man who murdered her husband. A group of travelling actors arrives in town. Hamlet’s plan works. This of course means that Hamlet has killed the father of his girlfriend Ophelia. At the end of the play, all of the royal household of Denmark are dead.

LearnEnglish | British Council This online level test will give you an approximate indication of your English proficiency level. You can use the result to help you find content on our website that is appropriate for your English language ability. About the online level test 25 multiple-choice questions 10–20 minutes This test is designed to assess your understanding of English grammar, vocabulary and phrasing. Each question is in the format of multiple choice and you will have a choice of three possible answers. You will be required to read each question carefully and select the answer that you think is correct. Instructions Test your English language skills by choosing the correct answer, then decide how sure you are that your answer is correct. It is very important to be honest about how sure you are. You will not be able to return to the previous question once you have submitted your answer and moved on, so make sure that you are completely satisfied with the answer you choose before you submit it. Results

Related:
Related:  Words in the News