Dropbox Buys Mailbox, an App With Some Buzz - Digits. Where does Microsoft make money? (Updated 2012) - Tanner Helland (dot) Com. THIS INFORMATION IS OUTDATED. 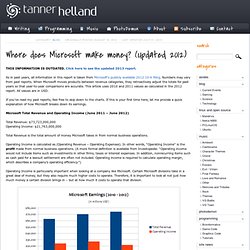 Click here to see the updated 2013 report. As in past years, all information in this report is taken from Microsoft’s publicly available 2012 10-K filing. Numbers may vary from past reports. When Microsoft moves products between revenue categories, they retroactively adjust the totals for past years so that year-to-year comparisons are accurate. This article uses 2010 and 2011 values as calculated in the 2012 report. How to Start a Startup. March 2005 (This essay is derived from a talk at the Harvard Computer Society.) 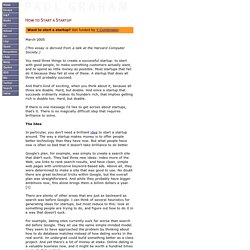 You need three things to create a successful startup: to start with good people, to make something customers actually want, and to spend as little money as possible. Most startups that fail do it because they fail at one of these. A startup that does all three will probably succeed. And that's kind of exciting, when you think about it, because all three are doable. The First Company To Build Your Identity Into Your Phone Wins The Next Decade. Editor’s note: Rebekah Cox is a product designer at Quora and previously a product design lead at Facebook. 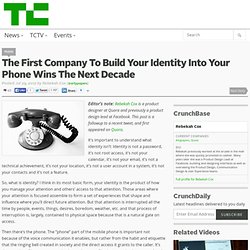 This post is a followup to a recent tweet, and first appeared on Quora. It’s important to understand what identity isn’t: Identity is not a password, it’s not root access, it’s not your calendar, it’s not your email, it’s not a technical achievement, it’s not your location, it’s not a user account in a system, it’s not your contacts and it’s not a feature. So, what is identity? I think in its most basic form, your identity is the product of how you manage your attention and others’ access to that attention. Those areas where your attention is focused assemble to form a set of experiences that shape and influence where you’ll direct future attention. Case study: evaluating the effect of email interruptions within the workplace. Has email become a distraction to the point that it causes a loss in productivity? If you review email as it arrives in your inbox, you are lowering your productivity. 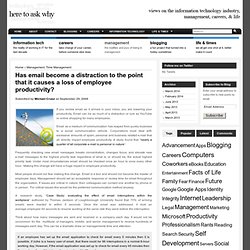 Email can be as much of a distraction or lure as YouTube or online shopping for many employees. Email as a medium of communication has leaped from purely business to a social communication vehicle. Corporations must deal with excessive amounts of spam, personal and business related e-mail that all directly impact employee productivity. A study found that ”nearly a quarter of all corporate e-mail is personal in nature“. Frequently checking new email messages breaks concentration, changes focus, and elevate new e-mail messages to the highest priority task regardless of what is, or should be, the actual highest priority task. Most people should not fear making this change. Email Top Distraction for Workers. Workers face lots of distractions over the course of a normal workday, but none is bigger than answering emails, a new survey has found. 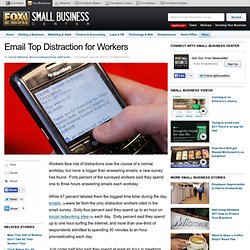 Forty percent of the surveyed workers said they spend one to three hours answering emails each workday. While 47 percent labeled them the biggest time killer during the day, emails were far from the only distraction workers cited in the small survey. Sixty-four percent said they spend up to an hour on social networking sites. Researchers Find Email Creates Stress and Distraction. Email creates stress and distracts us from other tasks. 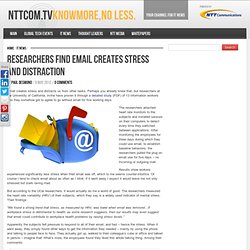 Perhaps you already knew that, but researchers at the University of California, Irvine have proven it through a detailed study (PDF) of 13 information workers who they somehow got to agree to go without email for five working days. The researchers attached heart rate monitors to the subjects and installed sensors on their computers to detect every time they switched between applications. After monitoring the employees for three days during which they could use email, to establish baseline behaviors, the researchers pulled the plug on email use for five days – no incoming or outgoing mail.

Results show workers experienced significantly less stress when their email was off, which to me seems counter-intuitive. Managing Distraction: How and Why to Ignore Your Inbox. Posted on behalf of Katherine Ellison, a Pulitzer-Prize winning investigative journalist, author, writing consultant and former foreign correspondent. 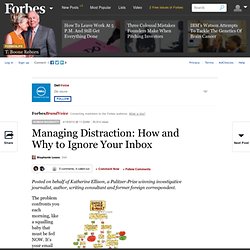 The problem confronts you each morning, like a squalling baby that must be fed NOW. It’s your email inbox, loaded with capital letters and exclamation marks and missives marked “URGENT.” Unlike with that baby, however, you’ll need to ignore even some of the most hysterically worded if you want to stay gainfully employed. I’ve been paying particular attention to just these sorts of distractions for the past seven years, ever since my son, then nine, was diagnosed with ADHD.

Like millions of other modern parents, I realized I shared his symptoms – a discovery that prompted me to study this increasingly common disorder for my book, “Buzz: A Year of Paying Attention.” Sara Canaday: The Surprising Career Disconnect in Today's Ultra-Connected Workplace. Web-based meetings with global teams. 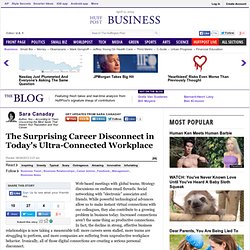 Strategy discussions on endless email threads. Social networking with "electronic" associates and friends. While powerful technological advances allow us to make instant virtual connections with our colleagues, they also contribute to a growing problem in business today. Increased connections aren't the same thing as productive connections. The true cost of eMail, and saving through Collaboration.

Triangle StartUp Factory. Fluent.io - Keep your email flowing. Why No One Has Tamed Email. Bio: Gentry Underwood is a software designer and CEO of Orchestra, which recently announced work on a mobile email app called Mailbox. 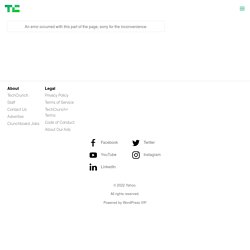 You can find him on Twitter at @gentry. Everyone complains about email. We’re awash in the stuff. We feel inundated. Overwhelmed. Here’s What Happened At Fluent. Fluent is shutting down, or so you may have heard. 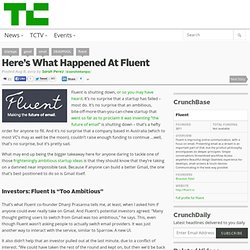 It’s no surprise that a startup has failed – most do. It’s no surprise that an ambitious, bite-off-more-than-you-can-chew startup that went so far as to proclaim it was inventing “the future of email” is shutting down – that’s a hefty order for anyone to fill. How Apple and Amazon Security Flaws Led to My Epic Hacking. In the space of one hour, my entire digital life was destroyed. First my Google account was taken over, then deleted. Next my Twitter account was compromised, and used as a platform to broadcast racist and homophobic messages.

First-Time Startup Entrepreneurs: Stop Fucking Around. Editor’s note: Paul Stamatiou is Co-founder of Picplum, a Y Combinator-backed photo printing service, where he obsesses over both design and development. He also co-founded Notifo (YC W10) and Skribit. Follow him on his blog, PaulStamatiou.com, and on Twitter: @Stammy. Reminisce with me for a bit. Do you remember the first time you got an Internet connection? Be A Bitch On Email, Or Be Email’s Bitch. I’ve long hated email. As someone with upwards of 5,000 unread messages at any given time, taking a quick moment to check email is like pushing hot pokers into my eyes. It makes me feel irresponsible and rude every time I see that massive number in bold, yet if I were to diligently read through each email I’m sent, I would write zero TechCrunch articles per day. I would complete nothing but the communication and coordination for future, real tasks.

This is thanks in large part to the actual content of messages. Sure, some startups are really great at the concise pitch, sending over three or four lines on their company and perhaps a screengrab, and asking if I want to know more. Email has replaced the old postal system in almost every case. And this isn’t just about me and my inbox full of pitches.

A 2011 study shows that most employees spend half of their time at work on email. Maybe wining and dining a client or an in-person meeting is the right time for schmoozing. Hey Jordan. Click. Facebook Better Get Mobile Quick. 102M People Accessed Solely From Mobile In June, Up 23% Since March. There’s a staggering new statistic in Facebook’s 10-Q SEC document today: 102 million people accessed Facebook solely from mobile in June, a massive 23% increase over the 83 million mobile-only users in March. 18.7% of its 543 million monthly mobile users don’t even visit its desktop site. That means if it can’t make its mobile advertising generate a lot more money within the next year, revenue could plummet like its stock price, down 6.2% today to $21.71. Another dead-serious new stat is that Facebook only grew 10% to 168 million in the US this last year, compared to the global average of 29%.

There were bright spots in today’s 10-Q, essentially a deeper version of Facebook’s earnings report. Facebook only spent $24 million to acquire Tagtile, Glancee, Lightbox, and Karma. Employees bringing more apps to work: Telsyte - consumerisation of IT, Bring Your Own Apps (BYOA), Bring Your Own Device (BYOD) It’s not only mobile devices that employees want to bring to work, it's also applications where staff seek to use Dropbox, Skype, Evernote and a variety of other apps, according to Telsyte. Telsyte surveyed more than 800 CIOs and senior IT decision makers and found 28 per cent of Australian businesses allow bring your own application (BYOA). “However, the unsanctioned use of BYOA is expected to be significantly higher,” Telsyte senior analyst Rodney Gedda said. Demand for BYOA is exacerbated “as more people use personal devices that are often tightly integrated with mobile and Cloud apps,” he said.

Software as a service (Saas) and mobile devices are driving the number of apps people bring to work, said Gedda, and the Google Android and Apple iOS mobile operating systems in particular are driving adoption of apps. “It is inevitable people will use these apps for personal and business use,” Gedda said.