Buffett & Munger: How To Get Smarter 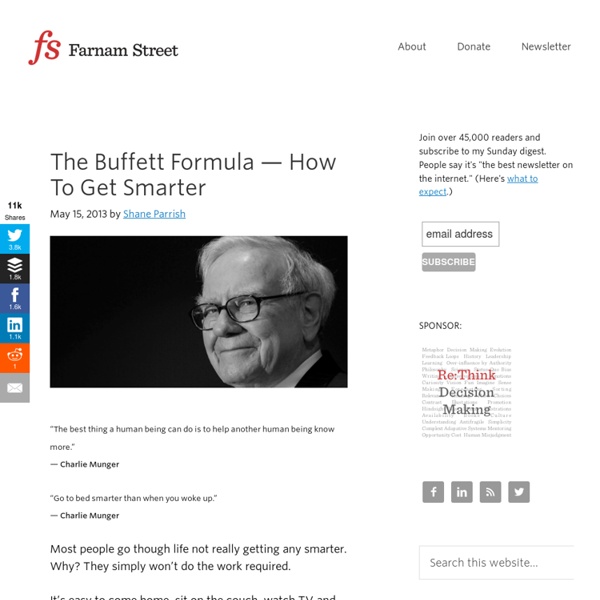 “The best thing a human being can do is to help another human being know more.” — Charlie Munger “Go to bed smarter than when you woke up.” — Charlie Munger Most people go though life not really getting any smarter. Why? It’s easy to come home, sit on the couch, watch TV and zone out until bed time rolls around. Sure you can go into the office the next day and discuss the details of last night’s episode of Mad Men or Game of Thrones. But you can acquire knowledge if you want it. In fact there is a simple formula, which if followed is almost certain to make you smarter over time. It involves a lot of hard work. We’ll call it the Buffett formula, named after Warren Buffett and his longtime business partner at Berkshire Hathaway, Charlie Munger. “I can see, he can hear. We can learn a lot from them. How to get smarter Read. Warren Buffett says, “I just sit in my office and read all day.” What does that mean? All of us can build our knowledge but most of us won’t put in the effort. Related:  Inspiration • nihalsaldanha

How Olympians Stay Motivated - Olga Khazan Mindfulness, self-talk, and an obscure chunk of the brain help elite athletes get through the training grind. Until the 1990s, Olympic figure skating included a segment called “compulsory figures,” in which athletes would slowly trace precise, intricate shapes into the ice, and judges would inspect the resulting swirls and loops to determine much of the skater’s overall score. These “figures” gave the sport its name, but they were gradually phased out because not even the most ardent skating fans would watch the tedious process on TV. Today's competitive figure skaters only do what their predecessors called the “free skating” portion—fast-paced programs set to music, packed with jumps and dance moves. When American figure skater Dorothy Hamill won gold in the ladies’ single competition in 1976, compulsory figures were the first event. They played a decisive role in whether the skater would medal. “The same thing, day in and day out,” she said. We can’t all be Olympic athletes. 1. 2. 3.

Getting Out Of The Comfort Zone We like training. It’s fun. We value it. Training is good for us. That’s why we do it. We like what we are doing and what it does for us. Expect when we aren’t actually getting most of these benefits. What I didn’t do was more. None of this is really training. I will admit, there are times in life when just treading water is tough enough. Ultimately, I’m responsible for the progress of my training. For most of us, the first time we step foot in the dojo we are pushing against more limits than we realize. Once we’ve taken that first step and trained for a while, the new danger is complacency. In a lot of things in life, a certain level of competency is sufficient. The key to this is to keep searching for that edge. I finally asked some people why they never trained with him and they all told me “He’s too good.” Over time though, my comfort zone increased. You have to go out past the edge of your comfort zone. Another clue is your mind. Don’t stay where you are.

Home | Daily Mail Online How to Make Wealth May 2004 (This essay was originally published in Hackers & Painters.) If you wanted to get rich, how would you do it? I think your best bet would be to start or join a startup. That's been a reliable way to get rich for hundreds of years. Startups usually involve technology, so much so that the phrase "high-tech startup" is almost redundant. Lots of people get rich knowing nothing more than that. The Proposition Economically, you can think of a startup as a way to compress your whole working life into a few years. Here is a brief sketch of the economic proposition. Like all back-of-the-envelope calculations, this one has a lot of wiggle room. If $3 million a year seems high, remember that we're talking about the limit case: the case where you not only have zero leisure time but indeed work so hard that you endanger your health. Startups are not magic. Millions, not Billions If $3 million a year seems high to some people, it will seem low to others. Money Is Not Wealth The Pie Fallacy Notes

Dance in a Year Family Business Center articles By Beverly Engel A meaningful apology is one that communicates what I call the three R's--regret, responsibility, and remedy. A statement of regret for having caused the inconvenience, hurt or damage. This includes an expression of empathy toward the other person, including an acknowledgement of the inconvenience, hurt, or damage that you caused the other person. Having empathy for the person you hurt or angered is the most important part of your apology. When you truly have empathy the other person will feel it. Regret, Responsibility and Remedy Unless all three of these elements are present, the other person will sense that something is missing in your apology and he or she will feel shortchanged somehow. The desire to apologize needs to come from the realization that you have hurt someone or caused them some difficulty in their life. Examples: "I am so sorry. For an apology to be effective it must be clear that you are accepting total responsibility for your actions or inaction. Remedy

Steampunk Art, custom metal art decoration like indoor lamps, clocks, bowls and outdoor garden lights etc. Notes Essays—Peter Thiel’s CS183: Startup—Stanford, Spring 2012 Peter Thiel's CS183: Startup - Class 10 Notes Essay Here is an essay version of my class notes from Class 10 of CS183: Startup. Errors and omissions are mine. Marc Andreessen, co-founder and general partner of the venture capital firm Andreessen Horowitz, joined this class as a guest speaker. Class 10 Notes Essay—After Web 2.0 I. It all started about 40 years ago with ARPANET. The Mosaic browser launched in 1993. “Web 1.0” and “2.0” are terms of art that can be sort of hard to pin down. Relative usage patterns have shifted quite a bit too. II. The Internet has felt a lot like the Wild West for last 20 years or so. Over the last 40 years, the world of stuff has been heavily regulated. Some big-picture Internet developments are on everyone’s radar. III. No one knows for sure when the future will arrive. Villemard's 1910 prediction of what schools would be like in 2000. Just a few decades ago, people were predicting chemical dinners and heating houses with radium. IV. V. And then it worked.

Oprah Winfrey: "Align Your Personality With Your Purpose and No One Can Touch You." Oprah Winfrey was so young when she started working as the late-night anchor on WLAC-TV in Nashville, Tenn., she still had an 11 p.m. curfew at home. Yet she was so successful at reciting the news on camera at age 19 that she quickly received an offer from a television station in Atlanta that would have quadrupled her salary, bumping it to $40,000. Her manager in Nashville tried to keep her: “You don’t know what you don’t know,” he told her. Winfrey stayed — not because she was afraid to take on a new challenge, she says, but because “I could feel inside myself … that he was absolutely right.” That included figuring out that she was better at chatting up ice cream vendors than covering murder and mayhem, knowing that she would not win a discrimination suit she considered filing early in her career to fend off a boss who was “drunk with power,” and realizing that, after 25 years, it was time to end her wildly popular daytime talk show and start her own network.