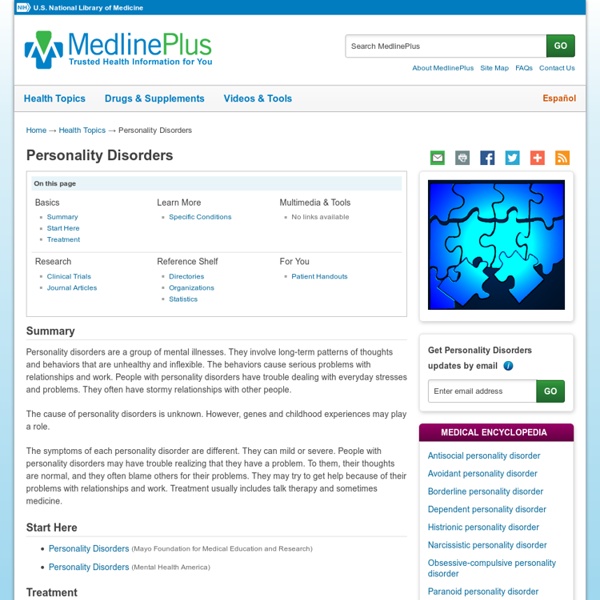 Psych Central - Personality Patterns Based upon the International Personality Item Pool (IPIP) Everybody is curious about their personality, so psychology to the rescue! Our personality test is similar to the Myers Briggs (MBTI) and the Jung personality tests, and is based upon an open-source set of personality testing items. These items are based upon scientific research and will provide results typical of a five-factor model of personality. This test consists of just 50 questions and takes about 7 minutes for most people to complete. First, let's get started with some basic demographic information about you... Reference: Goldberg, L.

Diagnostic and Statistical Manual of Mental Disorders, Fourth Edition (DSM-IV) | AllPsych Psychiatric Diagnoses are categorized by the Diagnostic and Statistical Manual of Mental Disorders, 4th. Edition. Better known as the DSM-IV, the manual is published by the American Psychiatric Association and covers all mental health disorders for both children and adults. It also lists known causes of these disorders, statistics in terms of gender, age at onset, and prognosis as well as some research concerning the optimal treatment approaches. Mental Health Professionals use this manual when working with patients in order to better understand their illness and potential treatment and to help 3rd party payers (e.g., insurance) understand the needs of the patient. The DSM IV is published by the American Psychiatric Association. The DSM uses a multiaxial or multidimensional approach to diagnosing because rarely do other factors in a person’s life not impact their mental health. Axis I: Clinical Syndromes Axis II: Developmental Disorders and Personality Disorders

Schizotypal personality disorder Schizotypal personality disorder is a personality disorder characterized by a need for social isolation, anxiety in social situations, odd behavior and thinking, and often unconventional beliefs. People with this disorder feel extreme discomfort with maintaining close relationships with people, and therefore they often do not. People who have this disorder may display peculiar manners of talking and dressing and often have difficulty in forming relationships. In some cases, they may react oddly in conversations, not respond or talk to themselves.[1] They frequently misinterpret situations as being strange or having unusual meaning for them; paranormal and superstitious beliefs are not uncommon. People with this disorder seek medical attention for things such as anxiety, depression, or other symptoms. Causes[edit] Genetic[edit] Social and environmental[edit] Robert Sapolsky has theorized that shamanism is practiced by schizotypal individuals.[11] Comorbidity[edit] Axis I[edit] Axis II[edit]

Schizoid personality disorder SPD is not the same as schizophrenia, although they share such similar characteristics as detachment and blunted affect. There is, moreover, increased prevalence of the disorder in families with schizophrenia.[2] Some psychologists argue that the definition of SPD is flawed due to cultural bias: "One reason schizoid people are pathologized is because they are comparatively rare. People in majorities tend to assume that their own psychology is normative and to equate difference with inferiority". Signs and symptoms[edit] People with SPD are often aloof, cold and indifferent, which causes interpersonal difficulty. Such images are believed to be important for a person's self-awareness and ability to assess the impact of their own actions in social situations. When the individual's personal space is violated, they feel suffocated and feel the need to free themselves and be independent. The 'secret schizoid'[edit] Avoidant attachment style[edit] Schizoid sexuality[edit] Diagnosis[edit] DSM[edit]

Somatic Symptom Disorder 1. Introduction In the chapter we present our model of treatment for somatic symptom disorder. We begin with a brief history of somatic symptom disorder followed by a discussion of theory and research on it. Physical symptoms with uncertain medical explanations are some of the most common presentations in primary care. Medicine has long recognized a group of patients with medically unexplained physical symptoms (MUPS) and excessive health concerns. It was not until 1980 and the publication of DSM-III that the terms somatization and somatoform were introduced for physical symptoms that were medically unexplained [4]. Both DSM-III-R [5] and DSM-IV [6] used similar diagnostic labels and criteria to those used in DSM-III for presentations predominated by MUPS. Somatic symptom disorder is a new diagnostic label proposed for DSM-5 [7]. Table 1. Proposed DSM-5 Diagnostic Criteria for Somatic Symptom Disorder 2. Patients with MUPS often engage in dysfunctional illness behavior. 3. 4. 4.1. 4.2.

Somatoform Disorders: Symptoms, Types, and Treatment Types and Symptoms of Somatoform Disorders continued... Conversion disorder. This condition strikes when people have neurological symptoms that can't be traced back to a medical cause. paralysis blindness hearing loss loss of sensation or numbness Stress usually makes symptoms of conversion disorder worse. Pain disorder. For example, they develop an unexplained, chronic headache after a stressful life event. Pain is the focus of the disorder. People with pain disorder frequently seek medical care. Somatoform disorder not otherwise specified. Conditions that fall into this category include pseudocyesis. Treatment of Somatoform Disorders Patients who experience unexplained physical symptoms often cling to the belief that their symptoms have an underlying physical cause, despite evidence to the contrary. A strong doctor-patient relationship is a key to getting help with somatoform disorders. The focus of treatment is on improving daily functioning, not on managing symptoms.