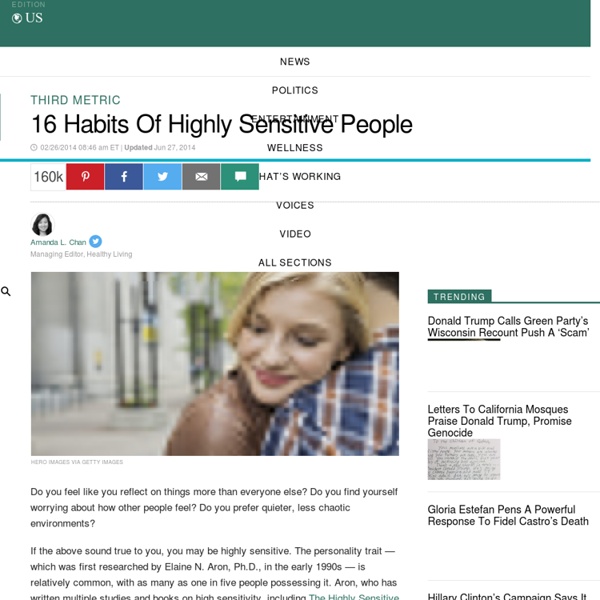 Do you feel like you reflect on things more than everyone else? Do you find yourself worrying about how other people feel? Do you prefer quieter, less chaotic environments? If the above sound true to you, you may be highly sensitive. The personality trait — which was first researched by Elaine N. Aron, Ph.D., in the early 1990s — is relatively common, with as many as one in five people possessing it. While recent interest in introversion — driven largely by high-profile publications on the subject, including Susan Cain’s book “Quiet,” — has brought more awareness to personality traits that value less stimulation and higher sensitivity, Aron notes that highly sensitive people still tend to be considered the “minority.” But “minority” doesn’t mean bad — in fact, being highly sensitive carries a multitude of positive characteristics. 1. One of the hallmark characteristics of highly sensitive people is the ability to feel more deeply than their less-sensitive peers. 2. 3. 4. 5. 6. 7. 8. 9.

2 of the Most Important Ways to Beat Depression Updated November 17, 2015. Inside the brain, an area known as the limbic system is vastly involved with some of the most fundamental processes of being human, including, motivation, learning, bonding, storing memories, sleep/wake cycles, libido—and emotion. Through our SPECT imaging work, we have found that when the deep limbic system is overactive, it lends itself to mood-related problems, especially depression. We’ve also observed that depressive symptoms can arise when the brain has low activity which can be caused by injury from events such as concussions, infection, a loss of oxygen and exposure to toxins.

15 Tips for the Highly Sensitive Parent - Megan Tietz "My nerves are just shot!" If I had a quarter for every time I heard my mother say this when I was growing up, I'd be pretty darn close to funding college educations for all four of my children. There were various versions of this phrase - including "you kids are getting on my last nerve!" ADHD and Exercise - Adult ADHD Daily Management Center Exercise is great for people with attention deficit hyperactivity disorder (ADHD). For starters, exercise increases the levels of brain chemicals called dopamine and serotonin, which are lower in people with ADHD. ADHD and Exercise: How it Helps

How A Machine Learned To Spot Depression : Planet Money I'm in a booth with a computer program called Ellie. She's on a screen in front of me. Ellie was designed to diagnose post-traumatic stress disorder and depression, and when I get into the booth she starts asking me questions — about my family, my feelings, my biggest regrets. Emotions seem really messy and hard for a machine to understand. But Skip Rizzo, a psychologist who helped design Ellie, thought otherwise.

Humanistic education Not to be confused with liberal arts education or classical education. See liberal arts . Humanistic education (also called person-centered education) is an approach to education based on the work of humanistic psychologists, most notably Abraham Maslow and Carl Rogers.[1][2] Carl Rogers has been called[by whom?] the "Father of Humanistic Psychology" and devoted much of his efforts toward applying the results of his psychological research to person-centered teaching where empathy, caring about students, and genuineness on the part of the learning facilitator were found to be the key traits of the most effective teachers[citation needed].

Are You Self-Blaming and Self-Critical? - Depression Resources, Education About Depression and Unipolar Depression Allan Schwartz, LCSW, Ph.D. was in private practice for more than thirty years. He is a Licensed Clinical Social Worker in the states...Read More When we stop and think about it, people can be extraordinarily self-critical. For example, I have worked with patients who entered psychotherapy because they were depressed over their divorces. These were not people recently divorced when it is understandable that their is a feeling of loss and mourning over the lost marriage but people who continued to struggle with the loss of the marriage years later.