Raining Lights [24Bits] Raining Lights by E-Mantra Acclaimed Goa Trance producer Emanuel Carpus (aka E-Mantra) returns for his fifth album with Altar records, with the brilliantly named “Raining Lights”, and what a beauty it is! 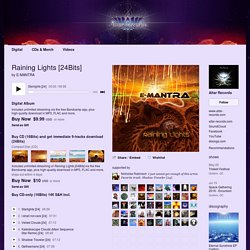 Hailing from Constanta, a port city on the Black Sea of Romania, E-Mantra is a seasoned veteran and prolific composer, with several releases on respected labels such as Suntrip and Altar, under a variety of aliases (E-Mantra, Emanuel Carpus, Neurosect, and Night Hex, to name a few). Early on in his career Emanuel was influenced by a wide variety of sounds, including acid, techno, and of course trance, but he’s primarily known for representing Goa Trance and Goachill / psychill / psybient (call it what you will). One of the things that makes his productions special is the emotional richness he brings to his craft, as well as his ability to create a sense of traveling into other worlds (both inner and outer). 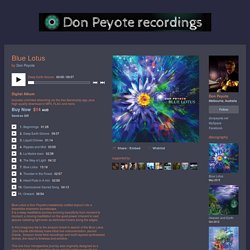 It is a deep meditative journey evolving beautifully from moment to moment, a moving meditation on the quiet power inherent in vast spaces radiating light even as darkness hovers along the edges. In this imaginary trip to the amazon forest in search of the Blue Lotus ,Don Peyote effortlessly fuses tribal live instrumentation ,sacred chants , Amazon forest field recordings and multi layered synthesised drones ,the result is timeless and emotive .

This one hour introspective journey was originally designed as a musical backdrop for modern rituals and for optimum results it is recommended to listen to this experiential composition in one session—preferably in a darkened meditative environment. releases 01 May 2015 All tracks produced by Don Peyote © Don Peyote recordings 2015. Raw Sugar (Valentines Day Mix) In celebration of Valentines Day, I put together a special mix of some of my songs from over the years. 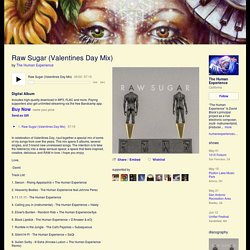 This mix spans 5 albums, several singles, and 3 brand new unreleased songs. The intention is to take the listener(s) into a deep sensual space; a space that feels inspired, creative, delicious, and RAW in love. I hope you enjoy. Love, [PREMIERE] Psydell - Re:Vision Mix by TheUntz.com. Vataff Project. ‘Maeoma ’ is the 4th album by ‘Vataff project’ the downtempo project of Victor Marinov a Bulgarian composer . 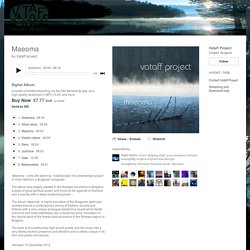 The album was largely created in the Rodopa mountains in Bulgaria a place of great spiritual power and home to the legends of Orpheus and a country with a deep mysterious power . The album ‘Maeoma’ is highly evocative of this Bulgarian spirit and centred around a contemporary mixing of tradition sounds and timbres with a very unique analogue electronica sound which twists and turns and flows effortlessly like a morphing sonic invocation of the natural spirit of the forests and mountains of the Rodopa region of Bulgaria. The work is of a particulally high sound quality and the music has a very strong esoteric presence and vibration and is utterly unique in its form and power and beauty . released 15 December 2012 Written and produced by Victor Marinov at "Port one" studio Sofia,Bulgaria. The following musicians appear on the album: Cover Photos Todor Kyurkchiev,Victor Marinov. Magic Sound Fabric - Dimension Shift. Medium.

Yaima - Gajumaru. Honey In The Heart. Honey In The Heart from The Divine Invasion by Bluetech video Includes unlimited streaming via the free Bandcamp app, plus high-quality download in MP3, FLAC and more. $1 USD or more Buy the Full Digital Album credits from The Divine Invasion, released 20 April 2009 tags tags: electronic Pāhoa license all rights reserved feeds feeds for this album, this artist. 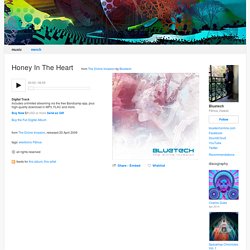 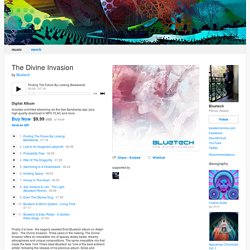 Three years in the making, The Divine Invasion offers an irresistible mix of spacey dubby beats, dreamy atmospheres and unique compositions. The same irresistible mix that made the New York Times label Bluetech as “one of the best ambient artists” following the release of his previous album- Sines and Singularities. In The Divine Invasion, Bluetech, a master of downtempo electronica, goes deeper and farther into new uncharted territories. From his distinct mellow oceanic ambience, emerge playful complex sound games and subtle yet sweeping currents of emotion, amalgamating into wordless songs.

Izzumm - Life Journey And Himalaya [Full EP] Quixotic & The Human Experience - From The Outside Looking In [Full Album] Mindex - Weasel. Ghost Bridge (Mr Projectile Remix) Conversations with Bees. Invisible Allies are explorers of the digital mysteries, documenters of forbidden histories and technoid inductees into the college of prismatic sound design. 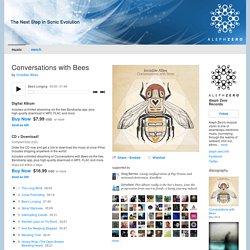 Collaborating through secret transmissions written in cyphers of bark and seeds, the musical collaboration of Bluetech and KiloWatts is decidedly unclassifiable in terms of genre, skipping school with warehouse dub theatrics, having an illicit romance with psychedelic production techniques and participating in a class riot against normality with techno, ambient, downtempo, breaks, and broken beatscapes. released 23 May 2014 Written and produced by Jamie Watts and Evan Bartholomew. Additional musicians: Meryl Joan, Flute on The Long Wind; Nils Bultmann, Violin on Bee's Longing; Jason Rinker, Tablas on Spiral Staircase; Dan Covan, Trumpet on And The Weeping Stopped; Sonja Drakulich, Vocals on Mending Time. Digital and analog mastering by Twerk @ Audible Oddities. www.audibleoddities.com Water falls, the sky, it weeps between us. 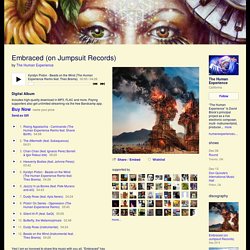 I am so honored to share this music with you all. "Embraced" has taken inspirations from so many people and places. Almost every song on this album has a collaborative musical element. This album is 12 song journey through sound that I will describe as world, downtempo, funky, sultry, sensual, heart-centered, juicy, yumminess. As I hope all of my albums will have a different (yet familiar) feel, "Embraced" is my first with this many varied collaborators. A little story about how I put together this album. I write around 30-40 songs per year. When David "The Polish Ambassador" Sugalski and I started toying with the idea of a Jumpsuit Records album. One of the most enjoyable parts about Jumpsuit is it feels like a family. The original title for the original selection of songs was "Surrender". Conversations With God. 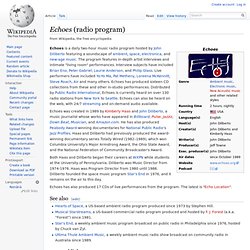 Diliberto was Music Director from 1974-1976. Haas was Program Director from 1980 until 1986. Diliberto founded the space music program Star's End in 1976, and it remains on the air to this day. Echoes has also produced 17 CDs of live performances from the program. The latest is "Echo Location".