Parents Against Mandatory Vaccines. US Vax Court Sees 400% Spike in Vaccine Injuries, Flu Shot Wins Top Honors for Biggest Payout. By The Mom Street JournalThe Business of Being a Natural Mom in the Modern World Vaccine injury cases are on the rise people, so if you’ve got your head in the sand and you haven’t been paying attention, it’s time to wake up. 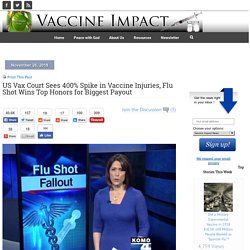 Here’s a little background for those of you just getting started. Ronnie Reagan… almost 30 years ago to the day, the 40th president of the United States signed away the rights of Americans to sue vaccine makers, replacing them with a law that forces families who have suffered vaccine injury or death to sue the U.S. government instead of a pharmaceutical company. As a result, special masters from the United States Special Claims Court, also known for our purposes as the vaccine court, are given full authority as judge with no jury to decide the fate of Americans who have had the unfortunate ‘luck’ to be stricken by a vaccine injury — which can range from chronic, mild symptoms to death. Media Blackout As Italian Court Rules Mercury and Aluminum in Vaccines Cause Autism. It has been more than five months since an Italian court in Milan awarded compensation to the family of a young boy who developed autism from a six-in-one hexavalent vaccine manufactured by corrupt British drug giant GlaxoSmithKline(GSK), and the U.S. media is still nowhere to be found in reporting on this breakthrough ruling. 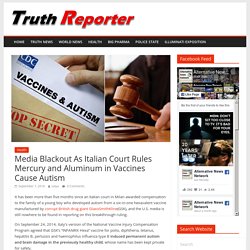 On September 24, 2014, Italy’s version of the National Vaccine Injury Compensation Program agreed that GSK’s “INFANRIX Hexa” vaccine for polio, diphtheria, tetanus, hepatitis B, pertussis and haemophilus influenza type B induced permanent autism and brain damage in the previously healthy child, whose name has been kept private for safety. When the Ministry rejected it, the family proceeded to file a lawsuit, which is no longer an option in the U.S. thanks to a Supreme Court ruling that exempts drug companies from legal liability when their products harm, permanently disfigure or kill people. Italian courts also found MMR vaccine causes autism Sources: Hashtag #VaccinesKill sur Twitter. Federal government releases financial settlement figures for vaccine injuries, shattering media’s false claim that vaccines never harm anyone. Even while the hopelessly dishonest, scientifically illiterate oldstream media continues lying to the public with the ridiculous narrative that “vaccines are safe” — read WashPost, The Atlantic, NYT or USA Today for a daily dose of vaccine holocaust denialism — the federal government has publicly released vaccine injury payout figures that prove vaccines routinely maim and kill children all across America. 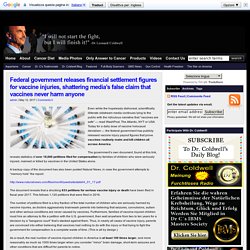 The government’s own document, found at this link, reveals statistics of over 18,000 petitions filed for compensation by families of children who were seriously injured, maimed or killed by vaccines in the United States alone. A backup copy of the document has also been posted Natural News, in case the government attempts to “memory hole” the report: The document reveals that a shocking 633 petitions for serious vaccine injury or death have been filed in fiscal year 2017. This follows 1,120 petitions that were filed in 2016. As reported by Waking Times: Parents Against Mandatory Vaccines. For the past several decades the number of vaccinations recommended (or required) by physicians, schools, colleges and employers has increased exponentially. 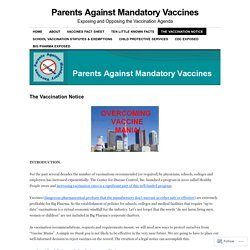 The Center for Disease Control, Inc. launched a program in 2010 called Healthy People 2020 and increasing vaccination rates is a significant part of this well funded program. Vaccines (dangerous pharmaceutical products that the manufactuers don’t warrant as either safe or effective) are extremely profitable for Big Pharma. So the establishment of policies for schools, colleges and medical facilities that require “up to date” vaccinations is a virtual economic windfall for the industry. Let’s not forget that the words “do not harm living men, women or children” are not included in Big Pharma’s corporate charters. As vaccination recommendations, requests and requirements mount, we will need new ways to protect ourselves from “Vaccine Mania”. 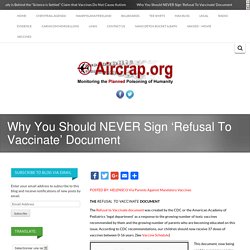 According to CDC recommendations, our children should now receive 37 doses of vaccines between 0-16 years. [See Vaccine Schedule] This document, now being used to overcome vaccine awareness, is the most diabolical strategy possible! It is unlikely that physicians have any idea what they are asking their patients to sign . . . or to sign away.

Family to Receive $1.5M+ in First-Ever Vaccine-Autism Court Award. The first court award in a vaccine-autism claim is a big one. 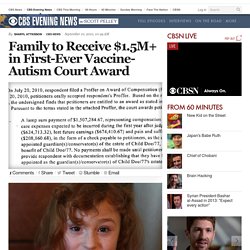 CBS News has learned the family of Hannah Poling will receive more than $1.5 million dollars for her life care; lost earnings; and pain and suffering for the first year alone. In addition to the first year, the family will receive more than $500,000 per year to pay for Hannah's care. Those familiar with the case believe the compensation could easily amount to $20 million over the child's lifetime. Alkyl Mercury-Induced Toxicity: Multiple Mechanisms of Action. Biologist Proves Measles Isn't A Virus, Wins Supreme Court Case Against Doctor. In a recent ruling, judges at the German Federal Supreme Court (BGH) confirmed that the measles viru... 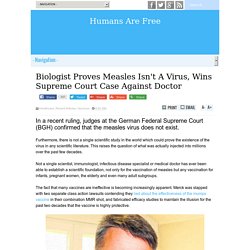 In a recent ruling, judges at the German Federal Supreme Court (BGH) confirmed that the measles virus does not exist. Furthermore, there is not a single scientific study in the world which could prove the existence of the virus in any scientific literature. This raises the question of what was actually injected into millions over the past few decades. Not a single scientist, immunologist, infectious disease specialist or medical doctor has ever been able to establish a scientific foundation, not only for the vaccination of measles but any vaccination for infants, pregnant women, the elderly and even many adult subgroups. The fact that many vaccines are ineffective is becoming increasingly apparent. Studies such as one published in the Human and Experimental Toxicology journal found a direct statistical correlation between higher vaccine doses and infant mortality rates. MMR Vaccine. Indian doctors sue Bill Gates for harming children with deadly 'humanitarian' vaccines.

(NaturalNews) If Monsanto, the most evil corporation in the world, were a person, his name would be Bill Gates. 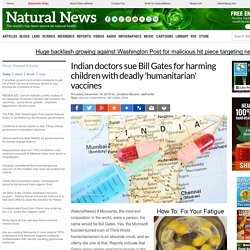 Yes, the Microsoft founder-turned-icon of Third World humanitarianism is an absolute crook, and an utterly vile one at that. Reports indicate that Gates' many crimes against humanity in the form of illegal vaccine testing on innocent children are finally being addressed in a new lawsuit filed by the Indian government, which seeks to stop this demon of death from killing any more babies. The Supreme Courts of India are currently conducting an extensive investigation into the Bill & Melinda Gates Foundation's devious actions abroad, which mainly involve testing deadly vaccines on poor, and oftentimes illiterate, children in developing nations without informed consent. According to Health Impact News, the case focuses specifically on illicit human experimentation that occurred with the two available vaccines for HPV, Cervarix (GlaxoSmithKline) and Gardasil (Merck & Co.). US Media Blackout: France Oppose Vaccines - “Transparency is the best medicine to treat unfounded scientific arguments.” — Marisol Touraine In response to growing skepticism in France about the safety and effectiveness of vaccines, the French Minister of Social Affairs and Health Marisol Touraine has called for a national debate this fall on the future of vaccination in that country.1 Touraine, who is concerned that there is greater suspicion and “even defiance” toward vaccines among the French people,2 seems intent on putting an end to what she seems to believe is a debate driven more by rumors than science. 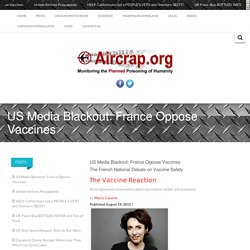 According to a recent presentation by European Ecology MEP (Member of the European Parliament) Michèle Rivasi, vaccine safety, “as a general rule, is being questioned” [in France].3 Rivasi went on to say: Between 2005 and 2010, the proportion of French people in favour or very in favour of vaccination dropped from 90% to 60% (2013 INPES Peretti-Watel health barometer). BREAKING: Author Of Mandatory Meningitis Vaccine Bill Caught Taking $420k From Big Pharma. State Senator Kemp Hannon, the author of the recently passed law that will require all seventh and twelfth graders in the state to get meningitis shots, has been caught taking large bribes from pharmaceutical and health companies. 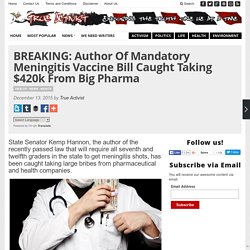 The whistleblowers, Stephen Krahling and Joan Wlochowski, claimed they witnessed “firsthand the improper testing and data falsification in which Merck engaged to artificially inflate the vaccine’s efficacy findings.” They charged that Merck used improper testing techniques; manipulated testing methodology; abandoned undesirable test results; falsified test data; and failed to adequately investigate and report the diminished efficacy of its mumps vaccine. Merck allegedly falsified the data to hide the fact that the mumps vaccine in the MMR shot has significantly declined in effectiveness.1. Courts quietly confirm MMR Vaccine causes Autism. After decades of passionate debate, parents probably missed the repeated admissions by drug companies and governments alike that vaccines do in fact cause autism.

For concerned parents seeking the truth, it’s worth remembering that the exact same people who own the world’s drug companies also own America’s news outlets. Finding propaganda-free information has been difficult, until now. Dr. Italian Court Rules MMR Vaccine Caused Autism: US Media Blacks Out Story. The debate over vaccines continues as an Italian court ruled in favor of the Bocca family who’s nine-year-old son became autistic after receiving the MMR (Measles/Mumps & Rubella) vaccine. David Kirby: Vaccine Court Awards Millions to Two Children With Autism. The federal Vaccine Injury Compensation Program, better known as "vaccine court," has just awarded millions of dollars to two children with autism for "pain and suffering" and lifelong care of their injuries, which together could cost tens of millions of dollars. 'Vaccine court' awards millions to two autistic children damaged by vaccines.

Mandatory Vaccinations Are Coming. Melissa Dykes, GuestWaking Times Not to be so doom and gloom, but there is clearly a definite orchestrated push to ensure that vaccinations will be mandatory for everyone in America in our near future. Not just healthcare workers. Not just schoolchildren. Everyone will be expected to get their shots, like it or not. The American Medical Association (read: Rockefeller) just weighed in on the debate, not just voting against personal exemptions, but voting to “mobilize the organization” to persuade our state governments to strip away our medical rights across the country.