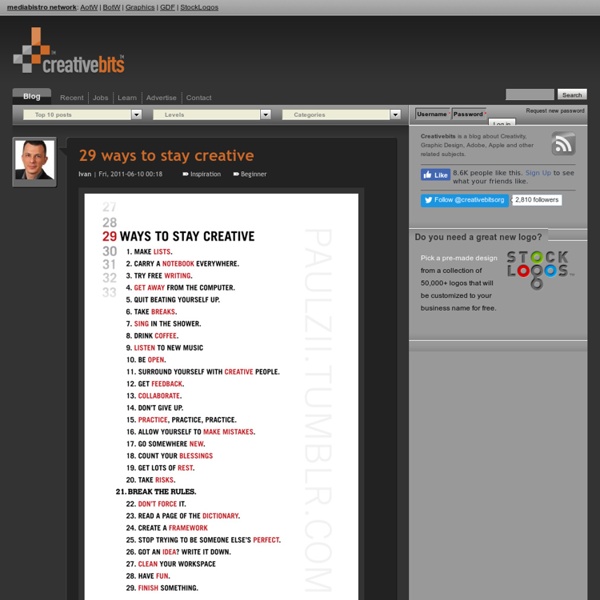 Related:  dinksdesigns • Not Yet Categorized • Creativity and Innovation • Too awesome • music

How the Brain Stops Time One of the strangest side-effects of intense fear is time dilation, the apparent slowing-down of time. It's a common trope in movies and TV shows, like the memorable scene from The Matrix in which time slows down so dramatically that bullets fired at the hero seem to move at a walking pace. In real life, our perceptions aren't keyed up quite that dramatically, but survivors of life-and-death situations often report that things seem to take longer to happen, objects fall more slowly, and they're capable of complex thoughts in what would normally be the blink of an eye. Ten rules for writing fiction Elmore Leonard: Using adverbs is a mortal sin 1 Never open a book with weather. If it's only to create atmosphere, and not a charac­ter's reaction to the weather, you don't want to go on too long. The reader is apt to leaf ahead look­ing for people. There are exceptions.

The Best Late Night Cafes in Toronto The best late night cafes in Toronto offer a tranquil alternative to a typical bar night with friends, and a comfortable space to get some work done in the evening. I always appreciate the option of going to a space near guaranteed to be void of any hair-gel/emblem-chain outfit combination, as well as one where music is complementary to, and not overshadowing, conversation. These cafes also serve as optimal environments for late-night studying, or in my case, blogging. That means comfortable chairs, a cozy atmosphere, great caffeine options, and tasty treats. And free WiFi is always an added bonus.

Best Quotes of All Time It’s been three years since we shared our original list of some of the best quotes of all time, and we felt it was a good time for an update. We’ve added another 25 quotes for you. But these aren’t just any quotes. These are quotes designed to inspire. 10 Things for Conscious People to Focus on in 2013 Dylan Charles, ContributorActivist Post The long anticipated and prophesied year, 2012, has come and gone; yet, the problems and challenges facing mankind and planet earth remain. Those who have put stock in the idea of conscious evolution are now faced with the burden of proof: is there any legitimacy to this idea of a ‘shift?’ Some human experiences prove too extraordinary and too far outside of the purview of science and intellect to effectively put into words. Because of this, many people who have felt ‘the shift’ taking place in their lives in recent years, such as I, find it difficult to convey the significance of what we feel taking place in the realms of our own psyches and amongst the collective human consciousness.

Llamagraphics Life Balance™ is a diﬀerent kind of time management software that helps creative busy people balance the responsibilities of work, home and play. Conventional paper and electronic planners only record meeting and and To-Do items. Life Balance oﬀers intelligent assistance for prioritizing daily tasks according to your aspirations, your current situation and time of day. The Life Balance App provides a dynamically ordered To Do List driven by the importance of your goals, your desired allocation of time and eﬀort, and feedback from what you get done each day, even when your list contains hundreds of tasks across many projects. Since priorities can change suddenly Life Balance oﬀers the ability to focus attention on tasks that are important to you. You can meet the daily demands of your manager, spouse or children, while maintaining a steady course toward your own personal goals.

Aerial Data Visualisation Reveals Life In The United States PBS is exploring the hidden patterns and rhythms that make America work. They are taking this data and visualizing it in a series being called, “America Revealed.” Visualization of internet distribution Fall Leaves Garland / D.I.Y. Project A few years ago I made a cute little leaf garland at the start of September. Now, it's a mini tradition and I always enjoy making something cute and decorative to ring in the new season every year. Would you like to make one too? Scales and emotions See also a post about making chords from scales. So maybe you want to write a song or an instrumental in a particular mood or style, and you’re feeling overwhelmed by all the scales. Here’s a handy guide to the commonly used scales in Western pop, rock, jazz, blues and so on. Click each image to play the scale right in your browser with the aQWERTYon.

» The No. 1 Habit of Highly Creative People “In order to be open to creativity, one must have the capacity for contructive use of solitude. One must overcome the fear of being alone.” ~Rollo May Post written by Leo Babauta. Creativity is a nebulous, murky topic that fascinates me endlessly — how does it work? Why You Should Be Playing with Google+ Now Google+ reminds me of another social network that started up not so long ago. I remember when I created an account and would talk to people about the service they would shake their head, roll their eyes and then say, “You’re such a geek.” And, at the time they were right. There was nobody using the service except a bunch of geeks.

Lesson Plan for Making a Speaker Laboratory ©1995 The Regents of the University of California by Regan Lum Introduction: A speaker is a device that converts an electronic signal into sound. Inspired Entertaining: DIY Chalkboard Wine Glasses Last month I got an email from one of those "deal of the day" websites featuring a very cute set of wine glasses with chalkboard stems from a company called Chalkboard China. I've seen chalkboard glasses before, and always thought them to be a fun and chic way for guests to keep track of their glass throughout the night so you don't end up with mixed-up glasses or dozens of half-full glasses left around the house. But all the ones I've seen in stores feature a strip of chalkboard paint across the bowl of the glass, which I've always felt looks awkward and takes away from the beauty of the wine or beverage in the glass. What I like about this version is that the writing part is at the bottom on the stem and foot of the glass, so it doesn't compete with the beverage. I also like that the simple black foot on the glass is in itself an elegant design element, and would work just as well with no writing on it.