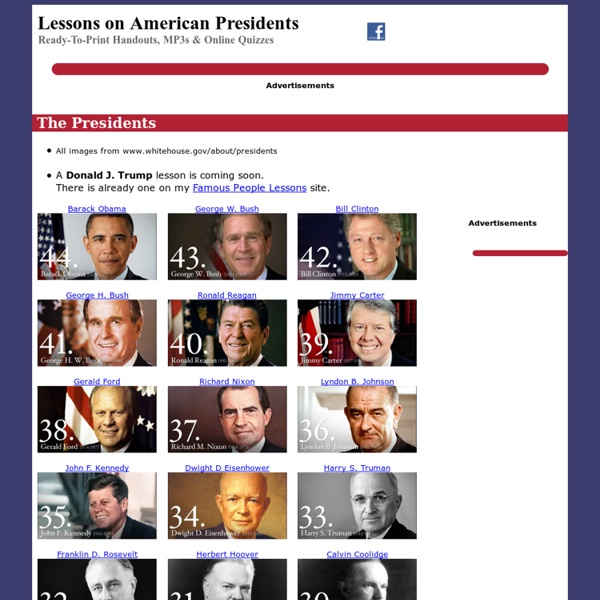 Related:  Listening Skills • To be categorized • Presidents + how the country is run

Listen A Minute: Easier English Listening and Lesson Plans English as a Second Language (ESL) Lesson plans & ideas for teachers: eslflow index & home page YouAreHere - where kids learn to be smarter consumers! In our virtual mall, you can play games, design ads, chat with customers and store owners, and much more. You’ll learn key consumer concepts, such as how advertising affects you, how you benefit when businesses compete, how (and why) to protect your information, and how to spot scams. What better place to do it than at the mall! Each area of the mall focuses on a different topic. To enter, choose an area. In the mall, scroll over a store to find out more about it, then click to go inside. Visit the West Terrace to learn about advertising techniques, target marketing, suspicious claims, and more. This site requires Flash. Parents & Teachers You are welcome to use the resources and activities on this site to teach kids about today’s marketplace. If you're looking for more detailed information about the topics covered on this site, check out the Parents and Teachers page for suggested activities and ways to use the site in your classroom.

Lincoln Kennedy Similarities and Coincidences Lincoln-Kennedy Similarities and Coincidences - Lincoln's name has 7 letters - Kennedy's name has 7 letters - In Lincoln's & Kennedy's names the vowels & consonants fall in exactly the same place; in the order c, v, c, c, v, c, c - Lincoln was elected to Congress in 1846 - Kennedy was elected to Congress in 1946 - Lincoln was elected president in 1860 - Kennedy was elected president in 1960 - Kennedy had a secretary named Lincoln - War was thrust upon Lincoln almost immediately after inauguration - War was thrust upon Kennedy almost immediately after inauguration - Lincoln ordered the Treasury to print its own money - Kennedy ordered the Treasury to print its own money - International bankers may have arranged the assassinations of both Lincoln and Kennedy - Lincoln gave black Americans freedom and legalized equality - Kennedy enforced equality for black Americans - Lincoln delivered the Gettysburg Address on November 19, 1863 - Kennedy was assassinated on November 22, 1963

U.S. Constitution Foreign Language Teaching Methods: Listening Hello! My name is Mahmoud Al-Batal and I am an Associate professor of Arabic in the Department of Middle Eastern Studies at the University of Texas, Austin. One of the areas in which I've been interested as a language teacher is listening, and I am happy to be here with you today to engage you in a discussion on listening. As learners of languages, you all realize how important listening is for communication, especially in this modern age of technology in which tremendous amounts of language input come to us through listening. Yet, despite this importance, the listening skill has not received the attention it deserves for a variety of reasons which we will discuss later in this module. While students in many language programs listen to audio recordings of the dialogues included in their textbooks, listening-only activities continue to be absent from many programs and little is done to provide systematic training in developing effective listening strategies.

BusinessEnglishSite.com - Business English Vocabulary and Grammar Exercises for ESL Students Elementary Nutrition Education - Childhood Health, Obesity Prevention, Nutrition Tools for Teachers, Elementary Schools, Parents Involvement, School- Home Partnerships Welcome Health & Nutrition Providers and Professional Educators Nourish Interactive is a completely free, English and Spanish website that provides nutrition educators and healthcare providers with a variety of interactive nutrition tools to assist you in teaching the key elements of nutrition to children and parents. We designed the website so that the parents’ webpages and nutrition tools complement the children’s games and nutritional messages. Each one of our computer games has free nutrition lesson plans. We provide a website that supports using technology in the classroom with children while facilitating promoting nutrition in the home. This way parents and children can work together to make nutrition a key part of their everyday lives. See This Month's Special Features for Teachers and Health Educators! Educator's Tools and Resources We Are proud to share with you: See a complete list of our games and what they teach. Read more about our Nutrition Education Games

CBBC Newsround - All about US President Barack Obama This page was made on Thursday 12th January 2012Last updated at 12:06 The current US president is Barack Obama, who was elected in November 2008 and officially took over the role in January 2009. He is the 44th president of the US and his election made history as he is the country's first black president. Barack Obama is a member of the Democratic Party - it's a bit like America's version of the Labour Party. The president before him was George W Bush who held office for eight years. He was a member of the Republican Party. Barack Obama was born on 4 August 1961 in Hawaii, to an American mum and a Kenyan dad. He spent his early childhood in Indonesia, in south east Asia. President Obama is now married to Michelle and has two daughters, Sasha and Malia. After university, Barack Obama worked in community projects, before going on to law school. He then was a civil rights lawyer and later went on to work for the local government of Illinois, a state in America.

Related:  Government • Presidents and elections
Related:  Listening Skills   -  To be categorized   -  Presidents + how the country is run