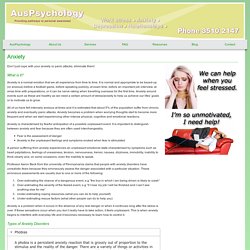 What is it? Anxiety is a normal emotion that we all experience from time to time. It is normal and appropriate to be keyed-up (or anxious) before a football game, before speaking publicly, at exam time, before an important job interview, at xmas time with preparations, or it can be nerve raking when travelling overseas for the first time. Anxiety around events such as these are healthy as we need a certain amount of stress/anxiety to help us achieve our lifes’ goals or to motivate us to grow. All of us have felt intensely anxious at times and it is estimated that about 5% of the population suffer from chronic anxiety and eventually panic attacks.

Anxiety is characterised by fearful anticipation of a possible unpleasant event. Fear is the assessment of dangerAnxiety is the unpleasant feelings and symptoms evoked when fear is stimulated Types of Anxiety Disorders. What Is Catholic Marriage Counseling? How to Overcome a Social Phobia. 7 Techniques for Overcoming Social Phobia. Meeting me was a sickening nightmare. 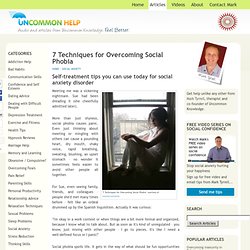 Sue had been dreading it (she cheerfully admitted later). More than just shyness, social phobia causes panic. Even just thinking about meeting or mingling with others can cause a pounding heart, dry mouth, shaky voice, rapid breathing, sweating, blushing, an upset stomach – no wonder it sometimes feels easier to avoid other people all together. For Sue, even seeing family, friends, and colleagues – people she'd met many times before – felt like an ordeal drummed up by the Spanish Inquisition.

Actually it was curious: "I'm okay in a work context or when things are a bit more formal and organized, because I know what to talk about. Social phobia spoils life. Yes, most people sometimes get a little self-conscious or feel somewhat shy around others, but social phobia significantly worsens the quality of life. So how do I get rid of social phobia? Learning to relax in social situations is the key (no surprise there!). I worked with Sue for seven weeks. Dealing with social phobia. Share on Facebook Tweet on Twitter Page 1 of 3 There are thousands of phobias out there, and as strong as we might think we are, no one is entirely immune. 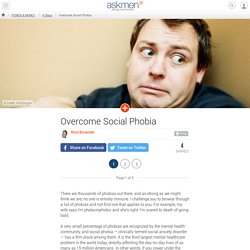 I challenge you to browse through a list of phobias and not find one that applies to you. For example, my wife says I'm phalacrophobic and she's right: I’m scared to death of going bald. Note: Any situational example provided is not the sole situation that social anxiety can arise in. Womenshealthmag. Abbey Drucker There's a reason Julia Hunt hates long lines and slow elevators, but it's not the one you might think. 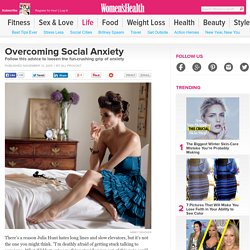 "I'm deathly afraid of getting stuck talking to someone. What if I blurt out something stupid or run out of things to say? " says Hunt, a 35-year-old writer in New York City, who still lives up to her teen title of "class blusher. " Being in the office is the worst, she says, because you run into the same people every day and you don't know them very well, but you want to impress them. Hunt's angst is more than just garden-variety shyness— it's a form of social anxiety, the fear of being criticized and rejected by others. As a result, worries about being rejected are shockingly common. Fear Factors Social anxiety can make you feel like you're living in an episode of Gossip Girl, where every action is scrutinized with a critical eye. Anne McDermott, a 35-year-old web editor in Boston, is a prime example.

5 Best Practices To Overcome Social Anxiety. Sharon would later cheerfully admit that she had been dreading meeting me; but for now, it was still a sickening nightmare. 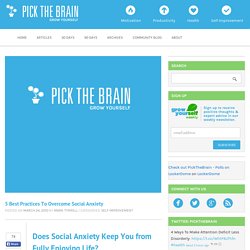 Social anxiety is more than just shyness. Just thinking about meeting or mingling with others can cause a pounding heart, shaky voice, rapid breathing, sweating, blushing, an upset stomach… It’s no wonder it sometimes feels easier to avoid other people completely. For Sharon, even seeing people she’d met many times before – such as family, friends, and colleagues – felt like an ordeal imagined by the Spanish Inquisition. Actually, it was curious: “I’m okay in a work context or when things are a bit more formal. Social anxiety spoils life by getting in the way of what should be fun opportunities to connect with others. Yes, most people get a little self-conscious at times or feel somewhat shy around others, but social anxiety significantly worsens the quality of life.

How do I get rid of social anxiety? 1) Practice being relaxed 2) Seek out social situations For example: How can a Christian overcome social anxiety?