Accusations of Depravity by World Leaders 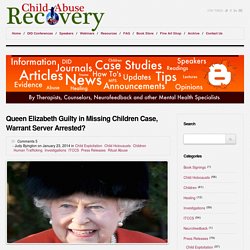 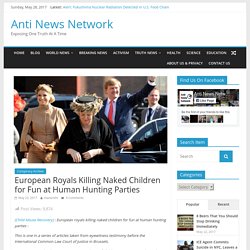 Five international judges are examining evidence of child rape, torture, murder and kidnapping allegedly done by global elite members of the Ninth Circle Satanic Child Sacrifice Cult network. Regular Ninth Circle child sacrifices were said to take place in the catacombs of Catholic Cathedrals, the Vatican, on private estates and groves and government military bases in Belgium, Holland, Spain, Australia, Ireland, France, England and the US. At least 34 child mass grave sites were identified in Ireland, Spain and Canada – and refused excavation by the respective governments, Crown of England and Catholic Church. In Ireland, Spain and Canada 34 child mass grave sites were discovered and appeared linked to Ninth Circle activities. Int'l Banker Blows Whistle, Admits He Was Ordered to Sacrifice Children at Parties for the Elite. Ronald Bernard is a Dutch entrepreneur whose drive and business contacts quickly catapulted him into the world of the financial elite. 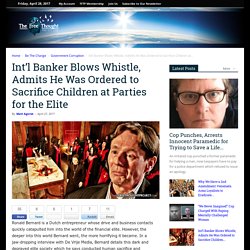 However, the deeper into this world Bernard went, the more horrifying it became. Why the MSM Is Ignoring Trump's Sex Trafficking Busts - Liz Crokin. Posted: Feb 25, 2017 12:01 AM The opinions expressed by columnists are their own and do not necessarily represent the views of Townhall.com. 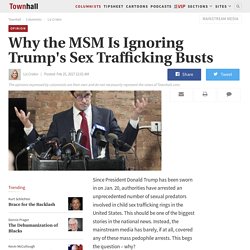 Since President Donald Trump has been sworn in on Jan. 20, authorities have arrested an unprecedented number of sexual predators involved in child sex trafficking rings in the United States. This should be one of the biggest stories in the national news. Instead, the mainstream media has barely, if at all, covered any of these mass pedophile arrests. Police Chief Confirms Fmr UK Prime Minister Raped Dozens of Children and Govt 'Covered it Up'

In what will likely turn into the largest pedophile bombshell in recent history, Sir Edward Heath, the former Prime Minister of the United Kingdom has reportedly been accused by the police chief as being a pedophile. 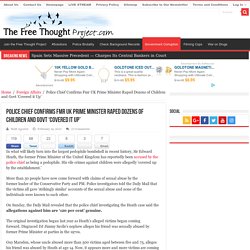 His vile crimes against children were allegedly ‘covered up by the establishment.’ More than 30 people have now come forward with claims of sexual abuse by the former leader of the Conservative Party and PM. Police investigators told the Daily Mail that the victims all gave ‘strikingly similar’ accounts of the sexual abuse and none of the individuals were known to each other. On Sunday, the Daily Mail revealed that the police chief investigating the Heath case said the allegations against him are ‘120 per cent’ genuine. The original investigation began last year as Heath’s alleged victims began coming forward. Guy Marsden, whose uncle abused more than 500 victims aged between five and 75, alleges his friend was abused by Heath at age 14. Fmr House Speaker Says Child He Raped Should Pay Back Hush Money Since He Broke His Silence. In April of last year, Dennis Hastert, former Speaker of the House and admitted child rapist, was sentenced to 15 months in prison for paying his victims to keep quiet. 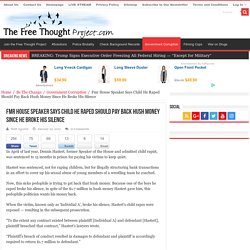 Hastert was sentenced, not for raping children, but for illegally structuring bank transactions in an effort to cover up his sexual abuse of young members of a wrestling team he coached. Now, this sicko pedophile is trying to get back that hush money. I Was Raped & Tortured by European Heads of State & One Royal When I Was 6-12 y/o — They Liked Killing Children.

When I was a little girl in my native Belgium, I was put to work as a sex slave. 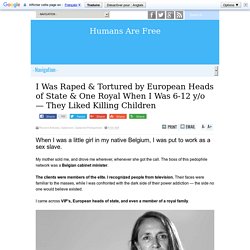 My mother sold me... When I was a little girl in my native Belgium, I was put to work as a sex slave. My mother sold me, and drove me wherever, whenever she got the call. Ben Swann Exposes The Pizzagate Conspiracy On CBS’s Reality Check. Bombshell: Obama, Clinton, Podesta, Soros, Epstein, Alefantis — All Connected to Pedophilia Claims by 'Podesta Emails' The following information is a new and chilling piece of the Podesta-Clinton email puzzle. 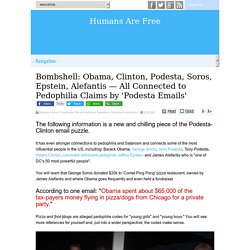 It has even stronger connections to pedophilia ... Why is Pizzagate so Far-fetched? Proven Pedophilia Disgustingly Widespread Among Those in Power. Why is it so hard to believe congressmen in Washington wouldn’t be delving into the disgusting realms of pedophilia? 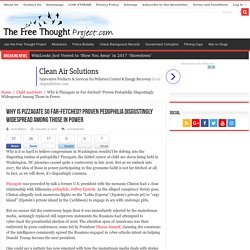 Pizzagate, the fabled rumor of child sex slaves being held in Washington, DC pizzerias caused quite a controversy in late 2016. But as we embark into 2017, the idea of those in power participating in this gruesome habit is not far-fetched at all. In fact, as we will show, it’s disgustingly common. Pizzagate was preceded by talk a former U.S. president with the surname Clinton had a close relationship with billionaire pedophile, Jeffrey Epstein. As the alleged conspiracy theory goes, Clinton allegedly took numerous flights on the “Lolita Express” (Epstein’s private jet) to “orgy island” (Epstein’s private island in the Caribbean) to engage in sex with underage girls.

Exclusive: Largest Pedophile Ring in History, 70,000 Members, Heads of State. Millions read the news today, the pedophile ring “busted” or the earlier article about how the FBI a... 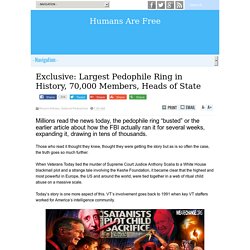 Millions read the news today, the pedophile ring “busted” or the earlier article about how the FBI actually ran it for several weeks, expanding it, drawing in tens of thousands. Those who read it thought they knew, thought they were getting the story but as is so often the case, the truth goes so much further. When Veterans Today tied the murder of Supreme Court Justice Anthony Scalia to a White House blackmail plot and a strange tale involving the Keshe Foundation, it became clear that the highest and most powerful in Europe, the US and around the world, were tied together in a web of ritual child abuse on a massive scale. Today’s story is one more aspect of this. VT’s involvement goes back to 1991 when key VT staffers worked for America’s intelligence community.

International Tribunal into Crimes of Church and State. The International Tribunal into Crimes of Church and State or ITCCS (allegedly est. on June 15, 2010)[1] is a one-man blog that pretends to be a tribunal established to enforce common law.[2] Kevin D. Annett (born in 1956)[3][Note 1] of the Nation of Kanata Canada is the founder and operator of a series of crank one-man blogs and phony organisations, the most famous among these being the above mentioned juridical quagmire[Note 2] of nonsense and pseudolaw, the ITCCS. Annett is also a pseudohistorian, an enthusiastic supporter of the freeman on the land movement,[4] a "bankster" and chemtrail truther[5] and a defrocked[6] transphobic[7] United Church of Canada[wp] minister.

He regularly accuses the Vatican, the government of Canada and the United Church of Canada of being worse than Hitler.[8] [edit] Pseudolaw galore [edit] International Tribunal into Crimes of Church and State [edit] International Common Law Court of Justice [edit] Tribunal into Crimes against Humanity. Queen Elizabeth Found Guilty in Missing Children Case.

Vatican secretly operates brothels for priests, leaked documents reveals. Rock Star Says the Elite Have Snuff Parties - Mainstream Media Thinks It's Fun! : Waking Times. Sigmund Fraud, StaffWaking Times We all know that money can’t buy happiness, which might be why people buy so much other stuff, but imagine what you could do if money were no object and happiness was not exactly what you were looking for. New twist in Westminster scandal: 114 secret files on paedophile cases missing, admits Government. Anonymous To Expose Horrific Child Sex Ring Within British Royal Family And Government.