Helpouts for Education & Careers. Unhangout. MakerSpace. Current Classes For participants Equipment List What is a Makerspace? 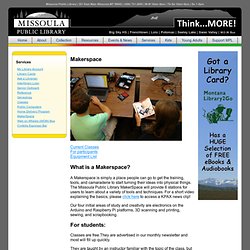 A Makerspace is simply a place people can go to get the training, tools, and camaraderie to start turning their ideas into physical things. The Missoula Public Library MakerSpace will provide 6 stations for users to learn about a variety of tools and techniques. For a short video explaining the basics, please click here to access a KPAX news clip! Our four initial areas of study and creativity are electronics on the Arduino and Raspberry Pi platforms, 3D scanning and printing, sewing, and scrapbooking. For students: Classes are free.They are advertised in our monthly newsletter and most will fill up quickly. For teachers: We are asking people with various MakerSpace-type skills to volunteer as instructors in this MakerSpace. What do we have in the MPL MakerSpace? We also have 6 work stations each with the following equipment: PBS: Public Broadcasting Service.

Not Old School: Architecture in Support of Learning. Vsdintro.pdf. Innovation Gallery « Reclaim Open Learning. This gallery showcases the entrants to, and winners of, the Reclaim Open Learning Challenge – an effort to surface innovators who are building the future of higher ed using technology and practices that are open like the web. 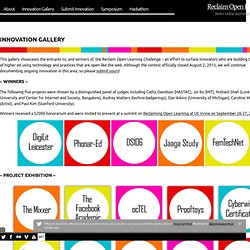 Although the contest officially closed August 2, 2013, we will continue documenting ongoing innovation in this area, so please submit yours! The following five projects were chosen by a distinguished panel of judges including Cathy Davidson (HASTAC), Joi Ito (MIT), Nishant Shah (Luneborg University and Center for Internet and Society, Bangalore), Audrey Watters (techno-badgerings), Dan Atkins (University of Michigan), Caroline Woolard (Artist), and Paul Kim (Stanford University). Winners received a $2000 honorarium and were invited to present at a summit on Reclaiming Open Learning at UC Irvine on September 26-27, 2013. DS106: Enabling Open, Public, Participatory Learning. Digital Storytelling 106--better known as "ds106"--sprouted in 2010 as a computer science class on digital storytelling at University of Mary Washington in Fredericksburg, Virginia. 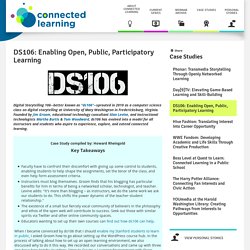 Founded by Jim Groom, educational technology consultant Alan Levine, and instructional technologists Martha Burtis & Tom Woodward, ds106 has evolved into a model for all instructors and students who aspire to experience, explore, and extend connected learning. Even before ds106 officially launched, instructors and students collaborated to grow the course into an interest-powered learning community with pop culture as its subject matter.

It is peer-supported to the point where students make up their own assignments. The assignments are academically oriented toward web rhetorics and an examination of the nature of all disciplines in an age of digital media. Jim Groom, an instructional technologist, had taught classes in English literature and museum studies. Back to top Interest-Powered Peer-Supported. The A.K. Rice Institute. The methodology and approach of group relations study supported by the A.K. 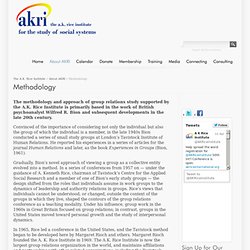 Rice Institute is primarily based in the work of British psychoanalyst Wilfred R. Bion and subsequent developments in the late 20th century. Convinced of the importance of considering not only the individual but also the group of which the individual is a member, in the late 1940s Bion conducted a series of small study groups at London’s Tavistock Institute of Human Relations. He reported his experiences in a series of articles for the journal Human Relations and later, as the book Experiences in Groups (Bion, 1961). Center for the Study of Groups and Social Systems. Connected Learning. Connected Learning. About - Hive NYC. Launched in 2009 with generous support from the John D. and Catherine T. 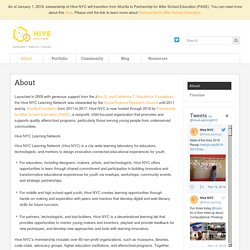 MacArthur Foundation, the Hive NYC Learning Network was stewarded by the Social Science Research Council until 2011 and by Mozilla Foundation from 2011 to 2017. Hive NYC is now hosted through 2018 by Partnership for After School Education (PASE), a nonprofit, child-focused organization that promotes and supports quality afterschool programs, particularly those serving young people from underserved communities.

Unschool Adventures. What We Do Since 2008 Unschool Adventures has organized international and domestic adventure programs for teenagers and young adults. We’re a small company with a big mission: to help self-directed young people build new friendships, unforgettable memories, and the confidence to lead an unconventional life. Our trips typically enroll unschoolers: young people who are given large amounts of freedom and responsibility to design their lives and educations as they see fit.

But you don’t have to be an unschooler to join—we’ve had high school students, traditional homeschoolers, alternative school students, and college students join us in the past. Because we only accept motivated, prepared, and conscientious young people in our programs, we ensure a high-quality experience for everyone who joins an Unschool Adventures trip. Unschool Adventures has a perfect safety record, meaning that no participant has ever been injured, assaulted, or gone to the hospital. What We Offer Online Workshops. 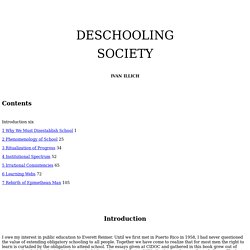 Since 1967 Reimer and I have met regularly at the Center for Intercultural Documentation (CIDOC) in Cuernavaca, Mexico. Universal education through schooling is not feasible.