15 Amazing Castles from Around the Globe 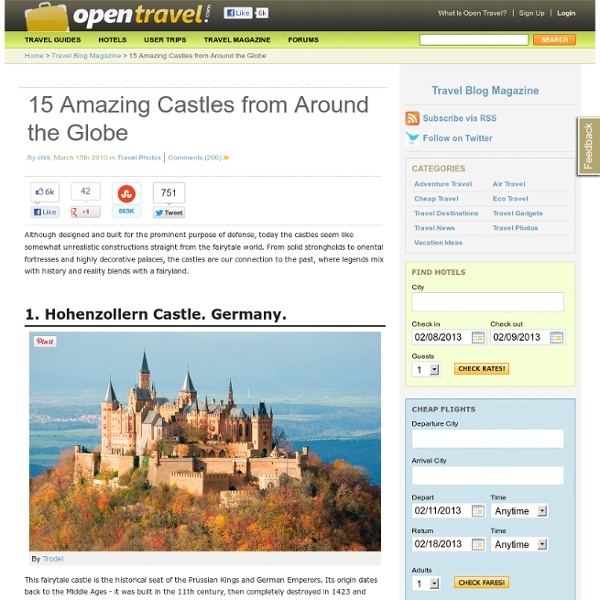 Although designed and built for the prominent purpose of defense, today the castles seem like somewhat unrealistic constructions straight from the fairytale world. From solid strongholds to oriental fortresses and highly decorative palaces, the castles are our connection to the past, where legends mix with history and reality blends with a fairyland. This fairytale castle is the historical seat of the Prussian Kings and German Emperors. Its origin dates back to the Middle Ages - it was built in the 11th century, then completely destroyed in 1423 and reconstructed in 1461. The view from the castle that stands on top of Mount Hohenzollern (855 m) is as stunning as the complex itself. The castle is located about 50 kilometers (30 mi) south of Stuttgart, the capital of the Baden-Württemberg state. Although it looks like a castle, Howard is actually a stately home - a private residence of the Howard family that has resided in the complex for more than 300 years. Burg Eltz castle.

28 of history's most fascinating photos The Statue of Liberty surrounded by scaffolding as workers complete the final stages in Paris. Circa 1885. An Royal Air Force pilot getting a haircut during a break between missions, Britain, 1942 Bob Marley on the beach with Miss World 1976 Cindy Breakspeare, mother of Damien Marley. Ethnomusicologist Frances Densmore recording the music of a Blackfoot chief onto a phonograph, 1916. 10 places to move abroad and extend your life Throughout history, people have been intrigued by legends of societies where residents thrived well past 100 years old. Today, there is skepticism whether any such place exists, but health scientists do scour the globe in search of medicinal remedies and other lifespan enhancements. In fact, many “pockets” around the world have been identified as “Blue Zones,” where locals enjoy high quality of life and health in old age.

The Traveller’s Medicine Cabinet: 5 Essential Drugs for the Road While out roving you aren’t always (or even often) anywhere near a hospital or pharmacy. But, if you pack these nutritional supplements and natural medications wherever you go, you’ll be able to cope just fine. #1: Kratom Riusuke Fukahori Paints Three-Dimensional Goldfish Embedded in Layers of Resin First: watch the video. Japanese artist Riusuke Fukahori paints three-dimensional goldfish using a complex process of poured resin. The fish are painted meticulously, layer by layer, the sandwiched slices revealing slightly more about each creature, similar to the function of a 3D printer.

22 Killer Personal Development Resources You're Missing Out On You’ve got the personal development itch once again. You know the feeling. Maybe you want to be more productive, finally tackle that goal of yours, or start waking up earlier. So you go to Google or your favorite personal development blogs. Maybe if you still haven’t found what you’re looking for you try searching for a Youtube video or ask your Facebook friends if they know of any good sites. And that’s it. Ancient skeletons discovered in Georgia threaten to overturn the theory of human evolution By David Derbyshire Updated: 12:26 GMT, 9 September 2009 For generations, scientists have believed Africa was the cradle of mankind. Now a stunning archaeological discovery suggests our primitive ancestors left Africa to explore the world around 800,000 years earlier than was previously thought before returning to their home continent. It was there - hundreds of thousands of years later - that they evolved into modern humans and embarked on a second mass migration, researchers say.

22 Incredible Photos of Faraway Places Thailand Chances are you already know Steve McCurry as the man who took one of the most iconic photos of our time. It was of a 12-year-old Afghan refugee girl who's piercing green eyes told us her harrowing story. The image itself was named "the most recognized photograph" in the history of the National Geographic magazine and her face became famous as the cover photograph on their June 1985 issue. Beyond just that one photo, McCurry has shot over a million images spanning 35 years. 25 Wonderful Places To Visit In Your Lifetime If you like this story feel free to share... Grand Canyon: One of the beautiful places of the world, Grand Canyon is the steep-sided gorge carved by the Colorado River in Arizona State of United States. Company Makes Custom Stuffed Toys Out of Childrens Drawings Child’s Own Studio does something pretty neat: If you supply the studio with a drawing a child made, the studio will produce a stuffed toy using the child’s drawing as the blueprint. Are you an overprotective parent who will stop at nothing to make sure your child is both safe from possibly iffy design choices, but also one who makes sure their child gets exactly what they want at all times always? Child’s Own Studio actually prefers you, stating that the more directions provided, the better.

The Comfort of Eggs in a Basket Eggs in a basket was the first meal I ever cooked. I was in 5th grade, and it was a Sunday morning at my best friend's house after a sleepover. We woke up hungry, and for some reason his parents weren't home. This confused me--my parents would never do that--but more important than confusion was the fact that I was terribly hungry, and I didn't see how that problem was going to be solved, since his house never had any cereal in it. "We'll make eggs in a basket," my friend said, pulling out a loaf of bread, a jug of oil, and a carton of eggs. You mean, we'll be cooking?