Phrases in 5 common languages to know when traveling in Europe 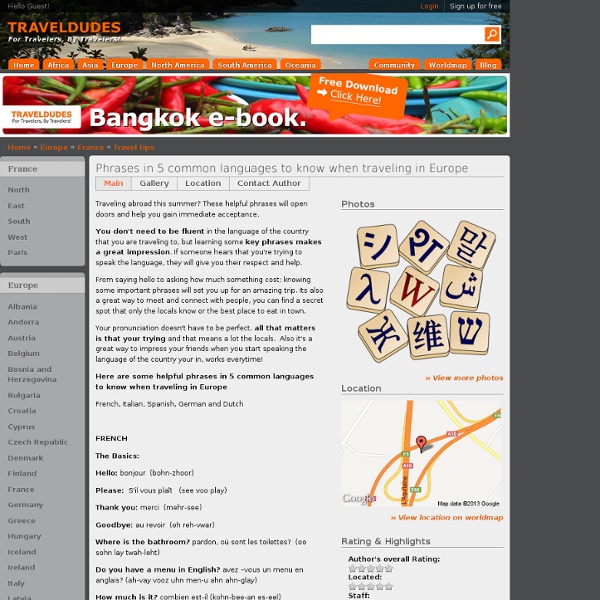 Traveling abroad this summer? These helpful phrases will open doors and help you gain immediate acceptance. You don't need to be fluent in the language of the country that you are traveling to, but learning some key phrases makes a great impression. If someone hears that you're trying to speak the language, they will give you their respect and help. From saying hello to asking how much something cost; knowing some important phrases will set you up for an amazing trip. Its also a great way to meet and connect with people, you can find a secret spot that only the locals know or the best place to eat in town. Your pronunciation doesn't have to be perfect, all that matters is that your trying and that means a lot the locals. Here are some helpful phrases in 5 common languages to know when traveling in Europe French, Italian, Spanish, German and Dutch The Basics: Hello: bonjour (bohn-zhoor) Please: S'il vous plaît (see voo play) Thank you: merci (mehr-see) Goodbye: au revoir (oh reh-vwar) I’m lost!

8 Incredible Ghost Towns to Visit in Europe Want to add these ghost towns to your RTW itinerary? Don’t know where to start? Sign up today for Plan Your RTW Trip in 30 Days and start receiving email lesson plans tomorrow – it’s free! If you’re a traveling family, sign up for the Family Edition of Plan Your RTW Trip in 30 Days. By definition, a ghost town is an abandoned town or city. DIY Rustic Pallet Coffee Table When I started the project I'm about to share with you, I had no idea what I was doing or how it would turn out. Luckily, I am thrilled with the results: This rustic looking coffee table was made with just two pallets. There had been a bunch of pallets stashed next door as they had just finished hauling new building materials in on them. I walked by them for a couple of days, with ideas stirring around in my head. Last weekend I convinced Dustin to help me craft a table with them.

5 Best Logo Maker and Logo Creator Tools Company logo is an important part of any business. It’s often the first thing your customer sees on your business card and your website. Company logo is the face of your brand. To create a logo, you can either spend some money to hire a graphic designer to create for you or you can use online logo generator do it yourself. To DIY, you can check out these 5 great free or affordable and user friendly online logo maker tools: 1) LogoGarden.com »

Embassy of the United States San Jose, Costa Rica How to Apply for a Visa Procedures and Instructions Temporary visitors to the United States must apply for and obtain a nonimmigrant visa before beginning their journey. The information in this website is designed to help you to understand the process and to come to the interview prepared. Simply click on one of the links below or on the left side of the page to begin. Futurama: encryption of alien symbols - Alien alphabet 1 Not a lot of time ago has been resumed one of my favourite series, Futurama, realized by Matt Groenning, the creator of the Simpson. Between the scriptwriters of Futurama are involved several scientist that provides continuously references to the science. In this post I'm going to explain the cryptography used in the series for code some alien inscriptions. At the classic cryptography were used encrypt methods that a computer can cryptanalyze, get the key in seconds and decrypt the code. With the arrive of modern cryptography, the methods are more resistant to the cryptanalysis by computer, because instead of delay seconds, can delay thousand of years or, as it's common to say in that field, the time necessary for the universe end, making reliable sending information encrypted. One of the most used methods of the classic cryptography was the simple substitution of the alphabet letters by unknown symbols or the substitution by letters of the same alphabet, establishing a correspondence.

Getting Around Eastern Europe – Tips to Save Money and Reduce the Hassle The easiest definition for the Eastern Europe countries would be: “countries which used to be behind the Iron Curtain.” If you don’t like history, then fear not, here’s the list of the Eastern and Southeastern European countries: Belarus, Estonia, Latvia, Lithuania, Moldova, Ukraine, Albania, Bulgaria, Bosnia & Herzegovina, Croatia, Kosovo, Macedonia, Montenegro, Romania, Serbia and Turkey. Often you’ll find Hungary on the same list. As many of us know already, if your vacation budget is low, visiting one of the Eastern European countries can represent a great way to see lovely places without spending too much. No matter where you are heading to, cheap accommodation is really easy to find. What will give you quite a few headaches is the transport.

5 Secret Restaurants in Paris Promise you won’t tell anyone…! 1. L’Etage de Pastavino – Saint Germain’s best-kept secret It just looks like an ordinary Italian deli (épicerie in French) on a bustling market street in Saint Germain … but it’s hiding a secret in a dark corner at the back. Indicated only by two blackboards nearly tucked out of sight, something well-worth discovering is at the top of this winding staircase … Watch Dexter Online Free - HD Quality, Full Episodes is an American television drama series that centers on Dexter Morgan (Michael C. Hall), a bloodstain pattern analyst for the Miami Metro Police Departmentwho moonlights as a serial killer. The show debuted on October 1, 2006, on Showtime and the fifth season ended on December 12, 2010. As of December 2, 2010, the show has been renewed for a sixth season. Set in Miami, the show's first season was largely based on the novel by Jeff Lindsay, the first of his series of Dexter novels. Subsequent seasons have evolved independently of Lindsay's works.

Time Zone Map DST – Click red dot for more info Legend: How to use the interactive Time Zone Map Search for any city in the search field above and place a black "pin" by that city on the map. If you place more than one pin, an extra line of information is added underneath the map with links to those cities' pages. You may add as many pins as you like. To remove the pins permanently (undo not possible), simply click here or on the Time Zone Map link in the menu above.Hover your mouse over any of the red dots to see the name of the city and country and current local time.