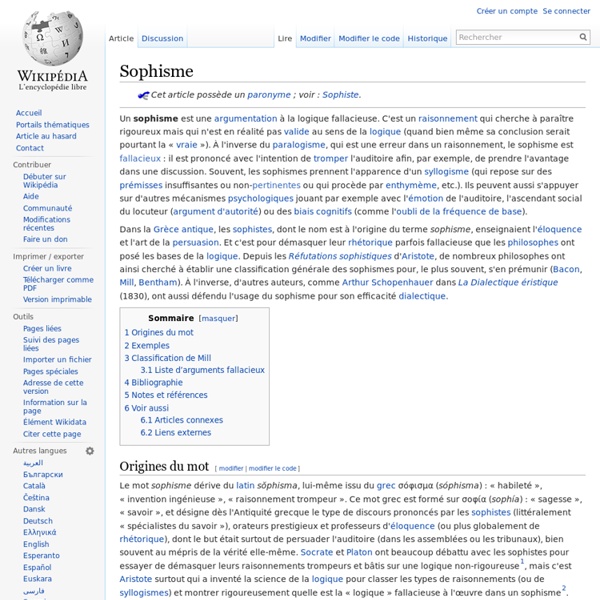 Self-Assembling Molecules Like These May Have Sparked Life on Earth - Wired Science When his students successfully converted chemical precursors into an RNA-like molecule in the form of a yellow gel, Nicholas Hud scribbled down the surprising recipe. Image: Nicholas Hud For Nicholas Hud, a chemist at the Georgia Institute of Technology, the turning point came in July of 2012 when two of his students rushed into his office with a tiny tube of gel. The contents, which looked like a blob of lemon Jell-O, represented the fruits of a 20-year effort to construct something that looked like life from the cacophony of chemicals that were available on the early Earth.

Fallacy A fallacy is the use of poor, or invalid, reasoning for the construction of an argument.[1][2] A fallacious argument may be deceptive by appearing to be better than it really is. Some fallacies are committed intentionally to manipulate or persuade by deception, while others are committed unintentionally due to carelessness or ignorance. Fallacies are commonly divided into "formal" and "informal". A formal fallacy can be expressed neatly in a standard system of logic, such as propositional logic,[1] while an informal fallacy originates in an error in reasoning other than an improper logical form.[3] Arguments containing informal fallacies may be formally valid, but still fallacious.[4] Formal fallacy[edit] Fallacies Dr. Michael C. Labossiere, the author of a Macintosh tutorial named Fallacy Tutorial Pro 3.0, has kindly agreed to allow the text of his work to appear on the Nizkor site, as a Nizkor Feature. It remains © Copyright 1995 Michael C. Labossiere, with distribution restrictions -- please see our copyright notice.

List of Fallacies A fallacy is incorrect argument in logic and rhetoric resulting in a lack of validity, or more generally, a lack of soundness. Fallacies are either formal fallacies or informal fallacies. Formal fallacies[edit] The Art of Being Right The Art of Being Right: 38 Ways to Win an Argument (1831) (Eristische Dialektik: Die Kunst, Recht zu Behalten) is an acidulous and sarcastic treatise written by the German philosopher Arthur Schopenhauer in sarcastic deadpan.[1] In it, Schopenhauer examines a total of thirty-eight methods of showing up one's opponent in a debate. He introduces his essay with the idea that philosophers have concentrated in ample measure on the rules of logic, but have not (especially since the time of Immanuel Kant) engaged with the darker art of the dialectic, of controversy. Whereas the purpose of logic is classically said to be a method of arriving at the truth, dialectic, says Schopenhauer, "...on the other hand, would treat of the intercourse between two rational beings who, because they are rational, ought to think in common, but who, as soon as they cease to agree like two clocks keeping exactly the same time, create a disputation, or intellectual contest." Publication[edit] A.

SCHOPENHAUER'S 38 STRATAGEMS, OR 38 WAYS TO WIN AN ARGUMENT Arthur Schopenhauer (1788-1860), was a brilliant German philosopher. These 38 Stratagems are excerpts from "The Art of Controversy", first translated into English and published in 1896. Carry your opponent's proposition beyond its natural limits; exaggerate it. The more general your opponent's statement becomes, the more objections you can find against it. The Self-Attribution Fallacy Intelligence? Talent? No, the ultra-rich got to where they are through luck and brutality. Is the Universe a Simulation? Photo Gray Matter By EDWARD FRENKEL Rhetoric Painting depicting a lecture in a knight academy, painted by Pieter Isaacsz or Reinhold Timm for Rosenborg Castle as part of a series of seven paintings depicting the seven independent arts. This painting illustrates rhetorics. From Ancient Greece to the late 19th century, it was a central part of Western education, filling the need to train public speakers and writers to move audiences to action with arguments.[4] The word is derived from the Greek ῥητορικός (rhētorikós), "oratorical",[5] from ῥήτωρ (rhḗtōr), "public speaker",[6] related to ῥῆμα (rhêma), "that which is said or spoken, word, saying",[7] and ultimately derived from the verb ἐρῶ (erō), "say, speak".[8] Uses of rhetoric[edit] Scope of rhetoric[edit] Scholars have debated the scope of rhetoric since ancient times.

College - Experience it Firsthand In September 2013, Berry’s original bald eagle couple was once again seen on the Berry College campus in the vicinity of the nest in a tall pine tree situated between the main entrance and the parking lot of the Steven J. Cage Athletic and Recreation Center. The couple spent several months repairing and adding to the nest and catching fish and coots in the nearby Berry quarry, Oostanaula River and Garden Lakes in Rome. An egg was produced on January 14, 2014, followed by a second egg on January 17. During the summer, college staff relocated the "approach" video camera to a pole closer to the nest and, with the help of a Georgia Power crew, mounted a "nest cam" in a branch near the eagles’ nest.

Fallacies  A fallacy is a kind of error in reasoning. The list of fallacies contains 209 names of the most common fallacies, and it provides brief explanations and examples of each of them. Fallacies should not be persuasive, but they often are. Fallacies may be created unintentionally, or they may be created intentionally in order to deceive other people. The vast majority of the commonly identified fallacies involve arguments, although some involve explanations, or definitions, or other products of reasoning. The smartphone app that could rescue the world's plankton Phytoplankton are the microscopic plant-like cells that float in the sea’s sunlit surface. They underpin the marine food chain and controversy over their stocks means it’s necessary to better understand their existence across the globe. To combat the lack of data on phytoplankton levels, colleagues at Plymouth University and I initiated a project to map them in oceans across the world.