Story of my teenage life.. Mega apatosaurus. Nightcore - Roar. Star Wars Yoga... (12) Pin de Samantha Rohr em My life story. Artist Removes One Letter from Famous Movie Titles and Illustrates the Results. Meanwhile in Romania. Dear iPod... Calvin and Hobbes: The later years... CUTE THINGS AND THINGS THAT MADE ME GIGGLE. 17 Small Things You Can Do Today To Have A Stronger Relationship. We all had this friend... Too hungry for soon. Things to do on weekends... Scumbag Jelly Beans... How to clean your house when guests are coming over... Linguistic differences. True words... So that's how Stephenie Meyer did it... Pin de Chrissy Wilson em HUMOR: Rated (R) Throw Kindness Around Like Confetti. (5) Pin de Stirling Sherman em Slap Happy! ;) I always go for the wrong one first... 21 Things We All Wish The New iPhone Would Actually Do. The biggest problem with the world...

Comic vs. Manga. The Grocery Shopping Dance [VIDEO] Hello? It's for you. Pile of words. Native American's wisdom. Expecto Petroleum! How to get more likes on Facebook. Time spent using Tupperware. This Cat Has The Strangest Miaow We've Ever Heard. This next-gen music speaker is really just hollow bamboo. Hoverbikes could be up for sale as early as 2017. This Japanese dad tickles her daughter pink by dressing as different historical characters at bath time. This alarm clock wakes you up with a freshly-brewed cup of coffee. Your worst enemy is now your own personal barista. 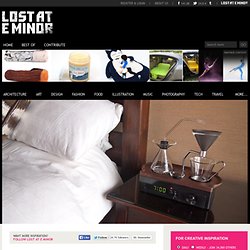 UK-based industrial designer Josh Renouf has invented the Barisieur, an alarm clock that instead of waking you with annoying bells and beeps, eases you into your day with the relaxing aroma of fresh coffee. Barisieur looks like your average alarm clock, with what looks like a chemistry set on top. Inside a glass beaker are stainless steel balls that boil water through induction heating. The hot water is then pushed out through a tube, onto the ground coffee, before finally dripping into a cup. There’s also a vial that contains the milk, and a cabinet to store sugar and coffee. In addition to waking up to fresh coffee right beside you, Renouf also says preparing the ingredients the night before helps you sleep better. “It encourages a ritual before going to sleep, signalling to the body and mind that it’s time to unwind and relax.” Tissue boxes are given a delicious makeover and turned into mouthwatering cakes.

The private jet of the future doesn't have a single window (but the view is still spectacular) Introducing the next generation of luxury air travel! 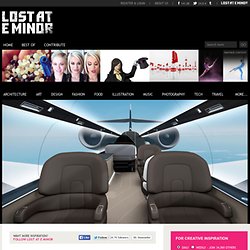 The windowless jet from Technicon Desig. Windowless you say? Yes indeed, but the Ixion private jet incorporates some clever camerawork with state-of-the-art technology to create an unrivalled inflight experience. Although there are no windows on the plane (except for in the cockpit), the interior is covered in high-resolution screen panels on walls and ceiling. Live feeds from cameras mounted around the outside of the fuselage are displayed on these interior panels, giving the impression that the plane is in fact one giant window! The French design firm have taken every step to make this concept jet the private plane of the future, using Parallax barrier technology to allow multiple displays on the same screen. This guy can speak so many languages he's probably never even heard of the language barrier. 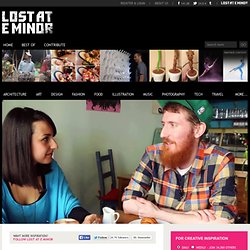 Matthew makes us jealous as well as feeling incredibly stupid. Matthew can speak nine languages and is what can generally what one would call a polyglot. What’s more he can’t be older than late twenties and clearly has a bright future (and more languages to learn) ahead of him. Matthew works at language and translation company Babbel, using his mastery of linguistics to devise practical and effective ways for people to educate their tongues.

Portugese, German, French, Spanish, Hebrew and even Gaelic, Matthew speaks them all effortlessly fluently and switches between them seamlessly. Watch the Babbel video below to see the multi-lingual Matthew busting out his ‘mad skills’. If Disney Princesses Were Twisted Badasses. Artist Jeftoon01 started a project where he took the princesses and fairies from famous Disney films and - to contrast their normal happy and harmless demeanor - turned them into murderous, vengeance-driven, dark badasses. 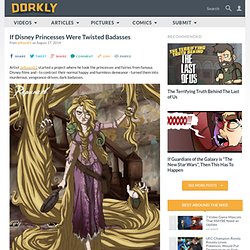 The best part? Each one has a detailed and grisly background story behind them - just check out Jeftoon01's DeviantArt page to see them! Check out the rest of Jeftoon01's gallery here! The Pokemon World Championship Was Won By a Pokemon You Wouldn't Expect. The Pokemon World Championship was held this weekend in Washington DC - and the final match-up in the Master Division came down to Se Jun Park of South Korea and Jeudy Azzarelli of the US. 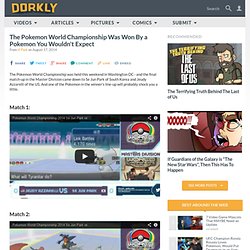 And one of the Pokemon in the winner's line-up will probably shock you a little. When the red light turns green... When girls take group photos... If the Apocalypse is happening make sure to avoid the Statue of Liberty... Are you Katrina? Every student's dream chair. That explains everything. Forever Disappointed... Watching Titanic in reverse... Arrest one of us... What I think when I see Facebook's friends icon... It happens every single time. Self-assembling origami robots are among us. The relaxing, ancestral art of Origami has received its biggest revolution since its inception: now it assembles itself. 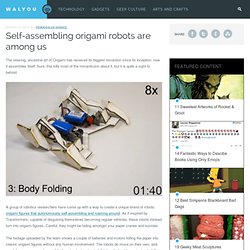 Sure, this kills most of the romanticism about it, but it is quite a sight to behold. A group of robotics researchers have come up with a way to create a unique brand of robots: origami figures that autonomously self assembling and roaming around. As if inspired by Transformers, capable of disguising themselves becoming regular vehicles, these robots instead turn into origami figures.

Careful, they might be hiding amongst your paper cranes and bunnies. The footage uploaded by the team shows a couple of batteries and motors folfing the paper into classic origami figures without any human involvement. You can see the process unfold right below these lines. People are hard to please. Moustacha. Precious... Every time I use Wikipedia. What not to do in case of fire... That kind of person... We live in a society... Showers. The one true fact of my childhood... Things are about to get serious. Philosophical mystery... Enforced Speed Limit... Pin de Stirling Sherman em Slap Happy! ;) Why is this so true. Age Verification test of the Day. Things Cats Do That'd Be Creepy If You Did Them. Things Santa Does That'd Be Creepy If You Did Them. Scientific Proof That Santa Exists. Pin de Angie Hime em nerd alert. Pin de Annie González em Quotes. 70s Does 20s Vtg Black Kimono Duster Coat / Long Fringe Jacket / SILK… Pin de Stacey Sunny em Oh, the hilarity! So You Dropped Your Food On The Floor: Do You Eat it? [PIC]