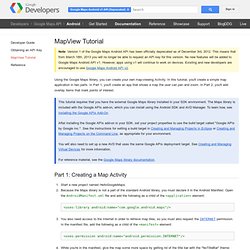 Part 1: Creating a Map Activity Part 2: Adding Overlay Items So, now you have a map, but in many cases you'll also want to create your own map markers and lay-overs. You're now done with the HelloItemizedOverlay class and can start using it to add items on the map. Go back to the HelloGoogleMaps class. First, you need the image for the map overlay. You should see the following: When you tap the overlay item, you'll see the dialog appear. Run the application again. Android (operating system) Free and open-source operating system for mobile devices, developed by Google. 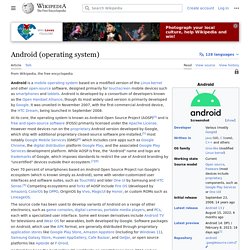 Android download categories. Installation and setup - GitHub. README.markdown Synopsis If you've made it here, chances are you are not quite as satisfied with the Android application framework as you could be. 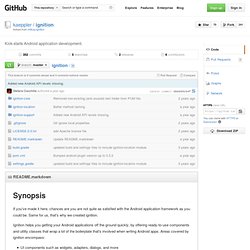 Same for us, that's why we created ignition. Ignition helps you getting your Android applications off the ground quickly, by offering ready-to-use components and utility classes that wrap a lot of the boilerplate that's involved when writing Android apps. Areas covered by ignition encompass: UI components such as widgets, adapters, dialogs, and moreAn HTTP wrapper library that allows you to write simple yet robust networking codeA class to load remote images off the web and cache themA simple yet effective caching framework (caches to memory and disk, anything from HTTP responses to entire object trees)Several helper classes for easier API level backwards compatibility, Intents, diagnostics, and moreA friendlier and more robust implementation of AsyncTask. Kaeppler/ignition - GitHub. How to Choose the Right Android ROM for You. In 2012, the average American consumed 13.6 hours of media each day. 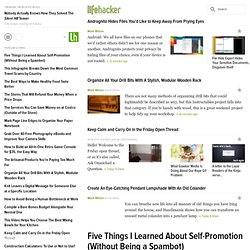 By 2015, that number is expected to rise to 15.5. These figures include media multitasking, e.g., listening to music while checking your email, so that it's possible to consume more than one hour of media within a 60-minute period. Shockingly,… » 8/14/14 12:01pm Yesterday 12:01pm. Tips and downloads for getting things done. CyanogenMod 7 Making Good Progress Getting Android Gingerbread on HP TouchPad [Video] It looks like things are picking up with regard to giving new life to HP’s Touchpad. 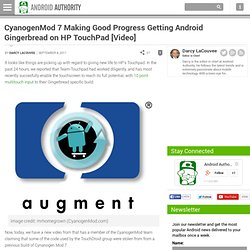 In the past 24 hours, we reported that Team-Touchpad had worked diligently, and has most recently succesfully enable the touchscreen to reach its full potential, with 10 point multitouch input to their Gingerbread specific build. Image credit: mrhomegrown (CyanogenMod.com) Now, today, we have a new video from that has a member of the CyanogenMod team claiming that some of the code used by the TouchDroid group were stolen from from a previous build of Cynanogen Mod 7. Anyway, it doesn’t really matter. What matters is that multitouch is fully enabled in the latest TouchPad CM7 ROM, as well as hardware graphics acceleration.

The plan is to have the device functioning in a dual-boot mode, so that users can switch between fully functioning versions of WebOS and a hacked version of Android Gingerbread 2.3+. According to Twitter: Motorola Droid RAZR Ships with Locked Bootloader. Android Authority - Android News, Phones, Tablets, Apps, Reviews. Techradar Does A Hands-on Report On The Grid 10. Fusion Garage’s latest release, the Grid 10 is an Android tablet is a rather unique Android tablet. 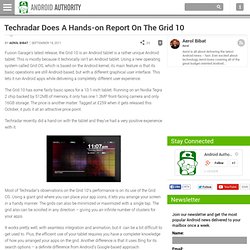 This is mostly because it technically isn’t an Android tablet. Using a new operating system called Grid OS, which is based on the Android kernel, its main feature is that its basic operations are still Android-based, but with a different graphical user interface. This lets it run Android apps while delivering a completely different user experience. The Grid 10 has some fairly basic specs for a 10.1-inch tablet. Running on an Nvidia Tegra 2 chip backed by 512MB of memory, it only has one 1.3MP front-facing camera and only 16GB storage. Techradar recently did a hand-on with the tablet and they’ve had a very positive experience with it.

Most of Techradar’s observations on the Grid 10′s performance is on its use of the Grid OS. It works pretty well, with seamless integration and animation, but it can be a bit difficult to get used to. Samsung Unveils Flexible Android Smartphone. Think a flexible smartphone is just science fiction? 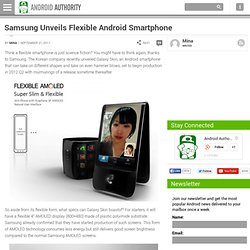 You might have to think again, thanks to Samsung. The Korean company recently unveiled Galaxy Skin, an Android smartphone that can take on different shapes and take on even hammer blows, set to begin production in 2012 Q2 with murmurings of a release sometime thereafter. So aside from its flexible form, what specs can Galaxy Skin boastof? For starters, it will have a flexible 4″ AMOLED display (800×480) made of plastic polyimide substrate. Samsung already confirmed that they have started production of such screens. Nook Color Video Hands on with Latest Cynanogen: Games & Apps Tested! 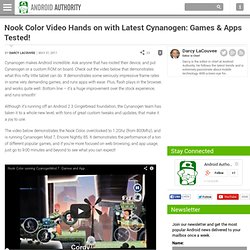 Ask anyone that has rooted their device, and put Cynanogen or a custom ROM on board. Check out the video below that demonstrates what this nifty little tablet can do. Android ROMs. ROMs, Downloads, Drivers & Tutorials For Your Android Device. Zte Blade Rom - Techappz32.

Developers. What is Android? Android powers hundreds of millions of mobile devices in more than 190 countries around the world. 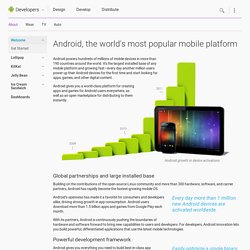 It's the largest installed base of any mobile platform and growing fast—every day another million users power up their Android devices for the first time and start looking for apps, games, and other digital content. Mobile/Platforms/Android. Download Firefox for Android Firefox for Android is now available. 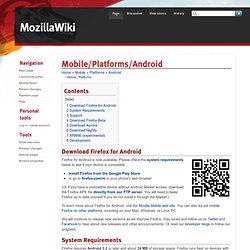 Please check the system requirements below to see if your device is compatible. (Or if you have a compatible device without Android Market access, download the Firefox APK file directly from our FTP server. You will need to keep Firefox up to date yourself if you do not install it through the Market.)