25 Vegetarian recipes you can cook in under 30 minutes 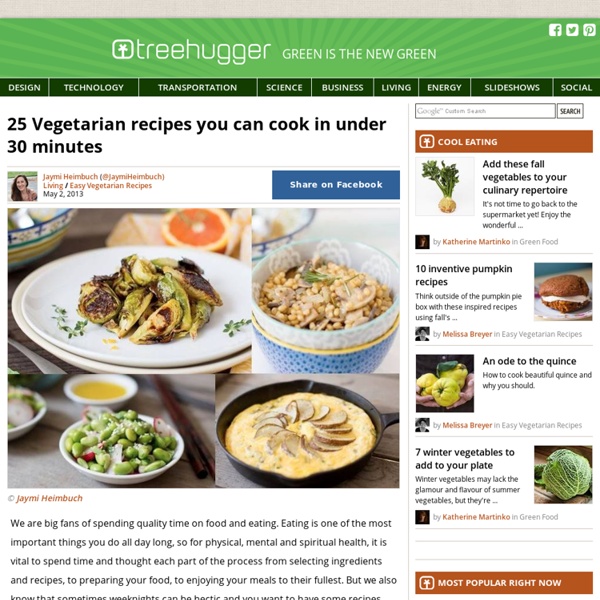 27 Diagrams That Make Cooking So Much Easier Including easy ingredient substitutions, basic knife skills, meat marinating times, and more. Advertisement 1. For making your own vinaigrette. Which you should be doing, instead of buying the bottled stuff. It’s healthier and tastier, and it’s really not hard. The Healing Power of Your Hands - Forever Conscious Did you know that your hands hold an innate healing power that have been used for centuries? Mudras are positions of the hands that are said to influence the energy of your physical, emotional and spiritual body. Mudras have been used in the East for thousands of years and were practiced by many spiritual leaders including Buddha. Today, Mudras are still used in Yoga and meditation.

Double Broccoli Quinoa Recipe This double broccoli quinoa bowl is a favorite of mine. I cook up lots of broccoli, then puree half of it into a pesto. The other half is cut into little florets. How to Use Spices: Three Spice Guides Cook Smarts have produced a great series of infographics about how to use spices with a real mix of areas covered across three different infographics. The first is a simple breakdown of countries cuisine’s by the basic spices that make up their dishes, followed by a guide to flavouring foods with different spices. The final guide is very useful especially if you’re new to using fresh spices in the kitchen and want a simple reference point for how to use spices with certain ingredients. Enjoy and this video is perfect if you've ever wondered how hot spices actually make us feel heat on the tongue.

Elbow Plank Pike Taps - Bikini-Belly Bootcamp - Shape Magazine - Page 2 To do it: Start in plank position with your forearms on the floor, elbows directly beneath your shoulders, feet hip-width apart. Brace your abs in tight so your body forms a straight line from head to toe (imagine you have a tight corset around your waist during this entire workout). Next, pike your hips up higher than your shoulders as you lift your right foot off the floor and tap it in by your left.

Avocado Toast Two Ways It’s been a busy week for me. I’ve been catching up after all the sxsw madness!! I’ve been having the Great Cleanser Green Juice each morning and I feel so much better for it! The Ultimate Food Guide You’re Not Going To Use But You Feel Healthier Just By Reading It TL ; DR – Bookmark and forget it 1 : This is how one serving of fruit really looks like 2 : 7 five-minute dinners nutritionists eat 15 Ways to Eat Healthy on a Budget 1. I wonder how I can keep the family in organic and gluten free food without spending quite as much? -Sadie H. Kristin: The key is that you really don't need to go organic on everything. The Environmental Working group publishes their dirty dozen and clean 15 list yearly.

7 DIY Vodka Infusions That'll Seriously Upgrade Your Homemade Cocktails (Photo Credit: Foodie with Family) Flavor-infused cocktails are always in order on a sweet summer night, and there's no better way to up your amateur bartending skills than with homemade vodka infusions. Not only are the DIY versions healthier than their liquor-store counterparts -- see ya never, artificial flavors!